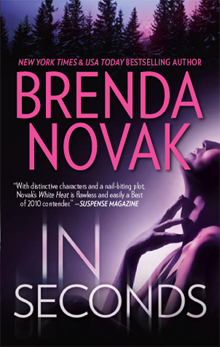 Four years ago, Laurel Hodges' brother was exonerated and released from prison after serving fourteen years hard time for a crime he did not commit. The relief and hope she'd harbored for a future with the brother she loved didn't last beyond the first attempt on her life. The Crew saw to that. A vicious gang with a long reach, her brother Virgil had joined them out of necessity when he was in prison. They weren't exactly amenable to his leaving it when he got out. They've been trying to kill him, her, and her two children ever since.

When the last attempt by The Crew forced her to separate from her brother and his new family two years ago, she started over yet again, this time as Vivian Stewart. She selected the town of Pineview, Montana because of its low crime rate, seclusion, and small town nature.

For two years she's lead that small town life and felt safe. Her handsome neighbor Myles King is the sheriff of Pineview, and has asked her out several times, but she's always declined. She can'd afford to get too close to anyone, be too honest with anyone, especially the single father and cop next door. That is the sentence that she serves now, and will have to serve for as long as The Crew keeps her and her loved ones in its sights.

It is a sentence she's mostly resigned herself to in order to keep her children safe, to stay alive. And when she hears of the murder of a man from town, Laurel fears that it is a sentence that has - unfortunately - been commuted. The Crew has a long, long reach. And they might have reached out and caught her once more.

I hate to say this, but I had some trouble with this second book in the Bulletproof series. I enjoyed the characters of the first one quite a lot, especially Virgil, and had been looking forward to his sister's book, but I ended up feeling a little disconcerted by the four year time span between books, and had a hard time reconciling the budding relationship between Rex, aka Pretty Boy, and Laurel that closed out the last book with the apparently painful breakup of the long-term relationship they had before she came to Pineview. That made it difficult to downshift and accept Myles as the romantic lead in this one. Maybe it also had a hand in the difficulty I had warming up to Laurel, too. I'm not sure.

I know I wasn't crazy about her. I think she was believable and realistic as a character, but she didn't strike me as being all that bright, and I had significant trouble with several of her life decisions. I still have to give Novak credit, though. She writes realistic and believable characters, even though one of them frustrated the heck out of me. Just because I didn't favor one of them doesn't mean they aren't well written.

In Laurel's case, it was an issue of too many conflicting had-it-beens, those moments where you put yourself in the characters place and think, had it been you, would you have said/done/acted the same as he/she did. In most cases with Laurel, the answer wasn't just no, it was an emphatic hell no. It started early - I would never have chosen a small town (where everyone knows your secrets and if they don't, they dig or shun until they do) with no cell phone tower (a disposable cell would've made things so much easier) to try to hide - and it persisted throughout the book.

Novak writes solid suspense imbued with an increasingly intense sense of impending doom. There's no argument there. I thoroughly enjoyed those threads in this book. I just wasn't totally sold on the premise for the suspense threads, and had some problems completely buying into a disabled thug like Ink being in a position to escape jail, whether or not he had help. Despite the plausibility of the premise, the execution was spot on - completely chilling in parts, actually - and I found myself really enjoying both the ever increasing tension and the way Myles handled himself as he was investigating and as he got closer to Laurel.

I was pretty confused about something, though, and wondered if I missed some part of the story. Rex fills in Myles about what's really going on just before he heads back to New York, and Myles is concerned about how to tell Laurel he knows. Next he sees Laurel, though, there's no confrontation about it and she treats Myles like he's always known the truth. I'm still not sure if that was an accidental plot contradiction or if I just missed something somewhere.

Regardless of the issues I had, I enjoyed the suspense and the characters of the story. My biggest problem, actually, and the largest reason this book wasn't as appealing to me as the first, was the lack of satisfying development in the romance arc. There was acknowledged attraction on both sides relatively early, but beyond a single night of lust satisfaction, there was next to no evolution of a romance between Laurel and Myles until I was over 70% into the book. And that was just too late to give either the romance arc or the characters enough time to be satisfactorily developed alongside the suspense.

I have to admit, I was heartened by the fact that the third book returns to Pineview and delves into a case surrounding Laurel's best friend. Not only am I hoping to see more of Laurel and Myles to get some sense of resolution and completion to their HEA, as well as see how they merge their families, but it'll be nice to get away from The Crew and their threats. That thread was starting to feel very worn by the end of this book.

I can't help but hope, though, that we haven't seen the last of Rex. He's been a favored character of mine since he dropped into the first book and my heart broke a little for him in this one. He's a bit of a dark and tortured soul, and I keep hoping he'll find the peace and love he deserves. It just seems he's got a lot of demons yet to vanquish before that happens. I hope Novak lets us see him get his own HEA at some point.

Return from In Seconds to Romantic Suspense Genre

Return from In Seconds to OGBDA Book Reviews Home