Not Boding Well for Damaged Dante 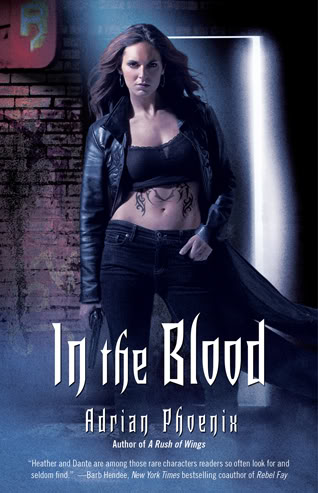 FBI Agent Heather Wallace knew that the events in D.C. hadn't been a victory for the home team. Not fully, anyway. She returned to Seattle, leaving Dante in New Orleans, both to give herself time to come to terms with the massive paradigm shift she went through when her hunt for the serial killer known as CCK dropped her into a dark world of vampires, fallen angels, mad scientists, and government conspiracy, and to try to protect Dante as much as she could through controlling the information the Bureau had on him. Okay, and to try to do some damage control on her career, too. But the Powers That Be aren't nearly done with Heather yet, and her superiors give her an ultimatum that lets her know just how precarious her position...and her life...really is.

And those are just the PTBs she knows. There are others. Darker. More dangerous. And they're the ones that don't want to control Heather...they want to control Dante. They want Heather dead.

Dante's band is on tour, heading to Seattle. Despite his worsening health and shattered psyche, the nightkind goth rocker is intent on safeguarding Heather. Suffering seizures, riddled with pain and barely holding on, he's heavily self medicating as his friends and fellow band members keep a wary eye on him. No sooner does he reconnect with Heather than their world is once again rocked with intrigue and danger. Dark shadow agencies are out to kill them, freaks of nature are out to kidnap them, and more than one very powerful supernatural force is searching, endlessly searching for him.

A flawed and broken Dante and world-weary Heather are once again at the center of a storm powerful enough to scour the earth...or unmake it.

The dark saga of True Blood nightkind and Fallen creawdwr Dante Baptiste and the FBI agent who loves him, Heather Wallace, continues in this second installment of The Maker's Song series. Slightly less gory and disturbing than its predecessor, In the Blood is just as complex and layered, grim and disturbing as the first, but it doesn't have quite the same level of sick, sadistic trauma that E brought along with him in A Rush of Wings. Oh, it definitely has some, as Dante's past is just about as sadistic and twisted as it gets, but fortunately the glimpses readers are afforded of Dante's childhood come in fractured, brutal little pieces that are easier for me to deal with than E's over-the-top sexual sadist butchery. At least in part.

There's no shortage of story here, but in that regard this book slightly edges out the first, because while there are plenty of layers to the plot, much complexity to the characters, and a plethora of conflicting agendas attacking from every side with each party of bad guys working dangerous and quick-changing angles, there's a slightly neater trail through that wild, ravaging forest than existed in A Rush of Wings. This book isn't quite as chaotic, didn't get quite so heavy laden with over-telling, and offered up a few moments of hope that the first book totally lacked.

There sure are a lot of different faces of corruption and evil in this series, though. If the Bureau and the SB aren't enough, there's the morally bankrupt Dr. Wells, who definitely won't be winning any Father of the Year awards in this millennium, and don't even get me started on the Elohim, who have just as many agendas and grimy graspers of power as you would expect any group of Fallen angels to have. Poor Dante really is the quintessential superstar - everyone on this planet and beyond want a piece of him, no matter how thoroughly it will destroy him. His story is tragic, heartbreaking, nauseating, and just plain sad.

In fact, that's starting to be one of the drawbacks of this series for me. Two books in and so much horror has been heaped onto Dante's plate, so much agony, misery, and treachery, that it's more than a little depressing. You can't like him as a character without wanting him to triumph in this, and honestly, I'm just not seeing enough glimpses of hope and happiness, tremulous as they may be, on this spiral into the hellish infernos of Phoenix's imagination.

I thoroughly respect Phoenix's talents. She's created such a flawed and broken protagonist and I can't help but root for him. Heather didn't do much for me in the first book, but in this one I really started to enjoy her spirit and appreciate her dedication to Dante - I just hope that dedication doesn't wane and that he doesn't have to suffer one more loss in his painfully short but horrifying life. He keeps pushing her away, but so obviously needs her. Wants so desperately to keep her safe, and knows that he's her biggest threat. It's all so Shakespearean.

I'm becoming quite fond of the llygad Von, who we met in the first book but really took on a distinct personality of his own in this one, and Cortini shows a lot of promise for a cold blooded executioner. They are both welcome additions to the story and added some nice depth to the good guy column...though as has been quite clear since the beginning of the series, "good" is relative. I was disappointed in Lucien's storyline, though. I can't seem to warm up to the Elohim contingent as story conflict fodder, and find their agendas and mythology often seem discordant when paired with the governmental and medical meddlers. I wish that planar aspect of the baddies had been dealt with first before the dark Aingeals had their part to play. And if wishes were fishes...

Adrian Phoenix has created a terrifying world with this series, a world on the brink of annihilation, when the big picture gets closely examined, and she's not above putting her main characters through debilitating misery. I have to be honest...that scares me. I have no idea if there will be a happy ending in this series, or even how I would define "happy" after two books of bleak hopelessness and a well told, if heartbreaking story. Because the series is so unique and the path so winding as I've read to this point, I'm really wondering how this is all going to turn out, but I'm almost afraid to read it and see. I said in my review of the first book that I like dark tales, and I do. But I'm starting to realize just how much I need at least a little lightness mixed in with it, and I favor an ultimate happy ending. I just don't know if I'm going to get that here. It may be a while before I pick up the next book in the series, though I do intend on doing so. And frankly, I'm not sure I'm comfortable with what that says about me...on any level.

I keep reading this series in the hope of something....anything good happening for Dante and Heather. It's almost too much to take at times.

I totally agree with the "over telling" It is a problem with her writing and she goes over the same events several times.

However - I'm attached to Dante, Heather and the gang and I must know the outcome so I'm hanging in a bit longer. Good review.

Hey, Karen. Thanks for the comment! Have you read the third and forth book in this series? My biggest concern is the hopelessness of the first two books. Like I mentioned in my review, I enjoy dark books, but there's got to be some point in a series where good things happen or it just gets to be too much darkness for me. That's my fear for this series. I feel for Dante, like how Heather really stepped up in this book, and love Von. I'm not sure about Lucien yet. I hope that there are some moments of hope and goodness coming for all of them.

Thanks again for commenting!

Return from In the Blood to Urban Fantasy

Return from In the Blood to One Good Book Home