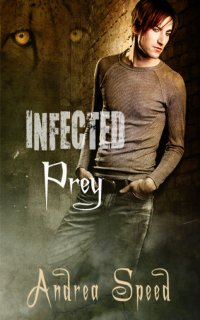 Disclosures:   A copy of this book was provided to me by the publisher for review.

In Infected: Private investigator and werecat Roan McKichon is called to the scene of an ex-cop's mauling to sniff around for clues. His infected status is no secret to the police force he once served, and he's gotten called in on a few "kitty crimes" in the past. In this case, though, Roan knows the prime suspect may just be his lover and business partner Paris Lehane.

If that worry isn't enough, their two-man firm has just picked up a new client, and Roan is on the trail of a missing teen. When he discovers that the kid is a werecat wannabe, the investigation points Roan towards one of his least favorite people and places, Eli Winters and his Church of the Divine Transformation.

Roan can deal with the small-minded fear and bigotry of the ignorant, those who hate him because he's gay...or infected. It's the ones who worship as gods those who are infected that seriously wig him the hell out. After all, the infection is a disease. A painful, life-shortening disease that brings physical agony once a month, steals your dignity and your identity, and threatens the general population. And he'll tell the kid that. If he can find him before he ends up as cat food.

In Prey: Roan and Paris are approached by the last person they'd expect to request their services. The venerable Eli Winters, leader of the Church of the Divine Transformation (or, according to Roan, werecat-worshiping nutcases), informs Roan that several young werecats from his congregation have been murdered and he wants Roan to find out who is responsible.

While Roan tries to find a cold-blooded killer, Paris works his own angle on the investigation, curious as to why Eli has brought this case to them. It's not like there are any warm feelings between the man and Roan. What they find will call into question everything they thought they knew about the zealot and threatens to push Roan into a situation that could more than ruffle his fur. It could end his life.

I enjoyed my introduction to author Andrea Speed and the two stories that kick off this series, Infected and Prey. It bears mentioning that this isn't a romance series, though the relationship between the main character Roan and his partner Paris plays a major part. While the two love each other, sex is glossed over or mentioned only in passing, and there are certainly no romance novel tropes in the storyline. Romance-only fans should be warned.

While I have a preference for romance in my reading, these two stories really worked for me. The world, while not expansively explained, was a big high point. It's got a real-world feel that appealed to me. Take away the paranormal elements and the plots of both stories could just as easily have fit in any hard-boiled detective novel.

The paranormal elements, though, were another high point. I loved the concept of a population of werecats created by a virus, with that virus spreading like any sort of real-world virus. And these aren't socially acceptable werecats, either. For five days of each four week virus cycle, the infected transform into one of several cat species, depending on the strain of their virus. They lose their humanity and become the predators. The rest of the time they are no more or less human than they ever were.

Hey, I'm a beast five days out of the month, too. I can relate.

The absolute best part of both stories and the most compelling element of the read for me were the characters. I loved Roan. He's a rough, complex, cynical bastard who edges towards bitter, especially when he allows himself to think about the future. In many ways, Roan is the quintessential jaded private investigator, grim and determined but a touch humorless about life. He's also a wounded loner, a sarcastic reprobate, and a closet White Knight.

Paris is definitely the more charming of the two of them. He's everything tall, gorgeous, and yummy, with a sensitive soul and a gentle nature. Fairly ironic considering his strain. His sense of humor is sharp and he's not afraid to use charm, humor, or his stunning good looks as shamelessly as he needs to to get what he wants, for himself or to help Roan.

Together they fit really well, though, each offering an essentially needed piece to the other. A fact that makes certain elements of this story just damn heartbreaking, actually.

While executed very well, the plot-driven investigative elements of both novellas weren't as satisfying to me. They were okay, but I found them more interesting for the information they provided about the world and the effect the werecats have in that world. I also felt pace in the middle of both novellas slowed, getting bogged down as each investigation languished. Then evidence would pile up or pieces would start to fall into place, the pace would pick up through to the end.

I did find it odd at first, then distracting, then bordering on annoying, just how often the fact that Roan is gay is mentioned, referred to, brought up, thought about, or discussed throughout both stories. By basically everyone, but especially by Roan himself. It seemed more of a major story element than even him being a werecat, and that just struck me as peculiar and one of the few things that niggled me as seeming unrealistic.

Realism. Seems an odd word to use in reference to a piece of fiction with a fantasy theme. It's fitting, though.

Speed hasn't pulled any punches in this debut, not when it comes to what it's like to be a werecat, or gay, or...whatever, exactly, Roan is or will be. And frankly, from the very first chapter it's clear that this series is not likely to be heading in a direction that's going to assure the characters any sort of a fairy tale ending. There is definitely a sense of realism in all that, and a sort of hopeless desperation. It's compelling reading, very well-conceived and executed, and I can't help but wonder what comes next.

"You just cursed him out?"

Paris stopped massaging the back of his neck and gave him a mock-stern look. "Clumsy how?"

"He may have walked into a wall while I was trying to handcuff him."

"Repeatedly. But he honestly did fall down the stairs all by himself."

"Repeatedly walking into walls can do that to a person."

"You just can't keep from being a smart-ass, can you?"

"Snarky is my default setting."

There were so many good reasons for hating people on an individual basis that mass, generic hatred seemed idiotic. Hate a person for who they were, God knows he did, but for what they were? Moronic and lazy.

This series is pretty good... although I have to say I haven't warmed up to Roan too much. The two stories in one threw me off, as I wasn't expecting it, not sure if I enjoy it.

The set up is unusual and very well done. It's true realism is weird to say about a story like this, but it plays out realistically.

There's something about Roan's character that really works for me. It was Paris I had a problem warming up to. Funny how it's different for different people.

The two stories in this one surprised me, too, but it was familiar to me from Josh Lanyon's Adrien English series, so I ended up not having a problem with it. Are the rest of the books the same way?

All except one have the 2 story thing going. I enjoyed them all and the second book is pretty emotional...

Thanks for the heads up, Mariana. I usually don't like to be spoiled, but it doesn't take a rocket scientist (or a virus child PI) to figure out exactly WHY the second book is emotional, and I have to admit...I'm really not looking forward to that.

Thank you for the review. If it's anything at all, I think I become a better writer as the books go along.

Andy,
Thanks so much for commenting. I appreciate your visit to OGBDA. I'm really looking forward to continuing this series, but I gotta admit, you are NOT easy on your characters. I suspect a bit of heartbreak in my near future. Thanks for writing - you've entertained me, a gift I always ALWAYS appreciate.

I'll look forward to what you think of the subsequent books :)

Return from Infected: Prey to LGBT-M/M

Return from Infected: Prey to One Good Book Home