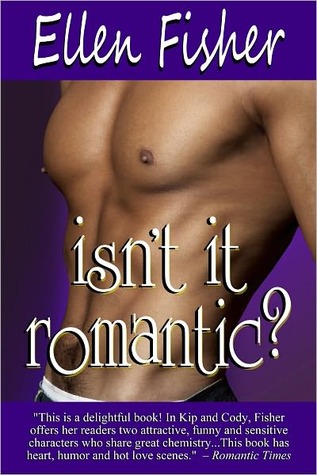 Kipling Stanton fell into acting and became a Hollywood star. When the science fiction television show he starred in ended it's run, he left the celebrity life for a quieter existence in a small town in Virginia where he could be himself without all the celebrity hoopla. His hopes for a quieter life are quickly dashed, however. Not because the paparazzi find him - that would be far to...normal. No, Kip's hopes for some peace and quiet are disrupted by a foxy redheaded neighbor with a fine butt and a propensity for asking strangers to marry her.

Cody doesn't really want to get married, but her father told her he's desperately sick. He's going to be visiting for a week and she sort of told him she'd gotten married to ease his mind about her, and now she's one husband short and about to be another big disappointment. Kipling is good looking, and most importantly, convenient, so Cody jumps on the chance to ask him this monumentally large...and patently insane favor as they meet for the first time over the hedge between their properties.

Kip, wary of women throwing themselves at him, is convinced Cody's either crazy or manipulating him, but Cody's harmless. She's a romantic. A dreamer. And she has no idea that she just pseudo proposed to the star of a beloved television show. All she knows is she's very attracted to him, and apparently, he's just as attracted to her. Isn't it romantic?

Honestly, it really isn't. In fact, the premise of this contemporary romance novella is more than a little corny. Perhaps if it had been longer and there had been more time to introduce Kip and Cody to each other before Cody pops the question it would have had a different tone, but as it is, it seems a bit too rushed and silly to be realistic. That is a trend that continues through the story as Cody's father and her best friend are added into the mix. The narrative is a bit repetitive, with Kip going back and forth with the thought that Cody has ulterior motives and Cody waxing on and on about everything being romantic. The dialogue suffered a bit in several spots, and more than once I had a hard time believing adults would talk or act the way the characters did. Cody's inability to stand up for herself against her father was a bit of a downer, as well.

All that being said, however, I can't help but admit that Isn't It Romantic? does have charm, and a surprising, but delightful bit of humor in it. While the plot and narrative lack sophistication, I enjoyed the story as a lighthearted, harmless contemporary romance. I enjoyed Kip, who I felt was a bit more fleshed out than Cody, and while the mind boggled at why he was going along with this insane neighbor of his, I did buy into a couple of his issues with self doubt about his acting ability and his fear of dogs.

By the end, I was left feeling Isn't It Romantic? is a simple, cute romance novella. It's not terribly believable, but it was entertaining and I don't regret the time spent reading it. It also get points for providing an epilogue that let us see a glimpse of Kip and Cody's future. Not only did the epilogue fit quite well with an organic progression of their relationship, but it provided a satisfying sense of closure to a truly happy ending both emotionally and professionally for both of them and I liked that very much. Despite the issues, I finished Isn't It Romantic? with a smile and a happy feeling and that's good enough for me.

Return from Isn't It Romantic to Contemporary Romance Genre

Return from Isn't It Romantic to OGBDA Book Review Home