It Had to Be You

It Could Only Be Lucky Harbor 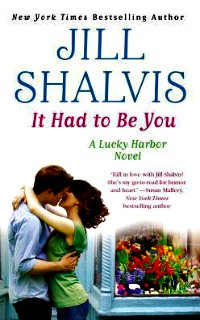 Disclosure:   An ARC of this book was provided to me by Grand Central Publishing/Hachette Book Group via NetGalley.

Sometimes it just doesn't pay to get out of bed in the morning. Unfortunately for Ali Winters, that sentiment spans more than just a single morning. It wasn't just getting dumped by her scumbag boyfriend Teddy, though that did suck. It just didn't suck as bad as actually catching him cheating on her, then getting a break-up text from him before she has a chance to dump him first.

To add insult to that particular injury, the text message kindly informed her he hadn't renewed the lease on the rental home they shared and she had to be out by the end of the month, which was, you know...yesterday. Now Ali has no home, no boyfriend, and a whole lotta rage. Not really a surprise that the police think she stole the $50,000 that went missing from Teddy's office after she left a very...detailed...note on his desk - and a voice mail or ten - letting him know just what she thought of him.

Returning to Lucky Harbor for some much-needed alone time after his latest case ripped his life apart, San Francisco cop Luke Hanover didn't expect to find a gorgeous, almost naked, and seriously brassed off woman squatting in his house. He wanted her gone so he could be miserable all by himself, but one look at the injured yet defiant Ali and he finds himself doing things he had no intention of doing.

Things like allowing her to stay at his place, or, when the police treat her like a suspect in a pretty major crime, getting involved to help her out. Which is the absolute last thing he wants to do. He just can't seem to help himself.

Yup, sometimes it just doesn't pay to get out of bed in the morning.

Another fun, feel-good Lucky Harbor romance! Shalvis' Lucky Harbor series is my favorite of the ongoing contemporary romance series I read. It's consistently entertaining, often flat-out delightful, and it's chock full of a wide variety of wacky and weird and wonderful characters who are so easy to adore. And of course, the romances between the heroes and heroines in each book are fairly awesome, too.

In this one we meet the irrepressible Ali and the inscrutable Luke as Shalvis kicks off her third set of loosely connected in-series trilogies, this one revolving around the boys of Lucky Harbor, three childhood besties who have grown up all kinds of hot, sexy, and heroic.

Lest I forget, you can't have a Shalvis romance without a quirky, fierce beauty to give the guy's heart his forever home, and I loved Ali. She's a spitfire. Dealt some pretty hard blows at the beginning of the book, Ali responds to each with her chin up and her fists clenched in proud defiance. She's strong and highly independent, but she's also got a softer, more easily bruised side that was very sympathetic. In fact, she sort of stole the show.

That's not to say that Luke isn't a tall dish of sexy goodness in his own right. Brooding, taciturn, and more than a little dented by life, Luke is the quintessential reluctant hero on the outside but total alpha male problem-solver at heart. He got sucked into the dual vortexes of Ali and Lucky Harbor and couldn't quite get himself free, no matter how hard he tried (which, well...wasn't really all that hard). He's a far more internal male lead than we've seen so far in the series, and he doesn't say a whole lot, but his actions speak volumes. I loved him.

As a couple they were a sometimes volatile and always impressive mix of hot sex and sweet, heart-tugging emotion. A very good pair to follow after the nearly incomparable Grace and Josh.

There was a suspense element in this storyline that the other books haven't had, and I liked it a lot. It didn't take a large chunk of story focus away from Ali and Luke's relationship arc, but it added a romantic suspense flavor that I enjoyed. Not that the Lucky Harbor series needed additional elements to improve it, or was lacking in any way, but I definitely thought it brought a new dynamic to the series that I appreciated.

But maybe it took something away, too, because I have to admit, the humor wasn't as prevalent as it was in the previous three books and I didn't feel there was as large an influence of Lucky Harbor residents as I'm used to enjoying. There were several included, obviously, and of course Lucille was up to her usual shenanigans, but overall on a lesser scale than I would have hoped for. Lucky Harbor's Facebook-loving geriatric brigade is always good for a smile or ten.

I also wish that Luke's problems with his job and the threat that brought to his life had been afforded a larger role in the story, with a more comprehensive resolution. Ali's issues, personal and legal, got significantly more page time, so the story lacked the sort of balance between the characters' personal evolution that other books have had. That was a little disappointing, especially as I had gone into this book looking forward to this three-book set in the series focusing more on the men and their lives and friendships, like the sisters in the first three and the female best friends in the second set.

But a little disappointment doesn't make this book a bad bet by any means.

Nothing about this book or this series is a bad bed. Shalvis is clearly at the top of her writing game and keeps cranking out touching stories that deliver on the sexy good times as well as the sigh-worthy love stories. For pure romance reading fun, you just can't do any better than Shalvis and her Lucky Harbor series. And if I ever find the place on a map, I'm so moving there.

Return from It Had to Be You to Contemporary Romance