Jax and the Beanstalk Zombies 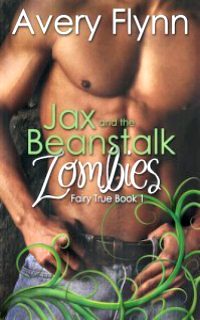 Veronica Kwon doesn't live the most conventional of lives. She walked away from a controlling father and his financial empire to start her own treasure hunting business, searching for those magical and mysterious artifacts of Fairy Tale fame. Her only regret, falling in love with fellow hunter Jax Taylor, the man who broke her heart - and their engagement - three months before the wedding.

She hasn't seen or heard from him since. Or she hadn't, until she strides into her mentor Antoine's shop and runs smack into a gorgeous, chiseled chest that could belong to no other but the bane of her existence.

The last thing Veronica wants to do is work with the man who still makes her pulse pound as much as he makes her blood boil, but she can't turn down Antoine's request, he taught her everything he knew about treasure hunting and was more a father to her than her own. And she certainly can't say no when he tells them he's found the three magic beans necessary to grow a very large beanstalk.

Standing next to the only woman he ever loved is a lesson in endurance and torture, but the reason Jax ended their relationship is just as pertinent today as it was the day he made that fateful call. If the opportunity Antoine presented them was any less spectacular he'd never subject his heart to being so close to Veronica again.

The expedition, however, is a bit more challenging than they had anticipated. Neither Veronica nor Jax had expected the beanstalk to lead them into a cloud country overrun with brain-eating, former-giant zombies. That fact certainly wasn't included in the briefing. Unless they can put their past behind them and work together to get out of the clouds, it may very well become a deadly oversight.

This original, imaginative story was so much fun! It's relatively short, even for a novella, but Flynn breathed life into these characters and their world in delightfully unique ways and it ended up feeling like a much meatier read than the story length would seem to allow.

I loved Veronica and Jax. What they lacked in depth of character and expansive personal history they more than made up for in vibrant personality. Veronica is a capable, independent, strong woman and Jax is everything hot and sexy in a man. The chemistry between them crackled across the page and electrified their relationship.

Second-chance romances are not a favorite of mine, but when it comes to novellas, especially those with a timeline that encapsulates only a few days, I often like them more than any other trope. The established relationship is just easier to embrace as the story races along towards an HEA. That served this story well, as I was completely on board with who they were as individuals and where their relationship stood within the first few pages of the story, allowing me to focus on the surrounding world and the arc of the plot.

The world-building was particularly well done. Flynn's writing style allowed for the magical elements of the world to be revealed as part and parcel of their character's experiences along their journey, instead of introducing elements, then explaining or defining them around the storyline. It may not have allowed for the most comprehensive world-view, but it added magical, creative color to the characters' immediate surroundings and day-to-day reality. And it did so in a very organic, inclusive fashion that appealed to me.

There were a few flies in the logic ointment in some places when it came to the plot. The plot twist was a doozy, I didn't see that one coming at all, but I was puzzled by Bad Guy's nefarious past deeds. I just couldn't figure out why he hadn't gotten enough the first few times. And how did the zombies survive so long before Bad Guy started feeding them? I also never had a good grasp of the timeline of the characters' history. It left me with some questions.

Still, none of those issues were major detractors. I was well-entertained by the danger, adventure, and steamy romance despite them. Though short, this was an action-packed, magical thrill ride of sexy good times. I couldn't be happier that it's the first in a series. I'd love to visit the Fairy True world again. Once was definitely not enough.

Return from Jax and the Beanstalk Zombies to Paranormal Romance