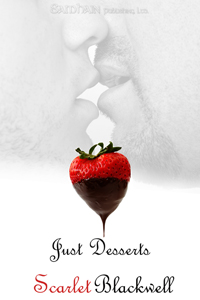 French chef Luc Tessier's ego is second only to his sexual appetites, and his mastery in the kitchen...over food and lovers...is legendary. English food critic Daniel Sheridan isn't nearly as enamored of either the food or the legend. In fact, Daniel has been openly critical of Luc's cooking in several media forums. Luc hates the man with a passion. That doesn't mean that his pride would allow him to do anything but rise to the challenge when he's informed that Daniel was coming to his restaurant to critique the menu, the food, and by default, the chef.

With images of dominating the faceless foodie stiffening his swizzle stick, Luc cooks each course to his exacting standards, determined to wow the critical critic. When his maître d' informs him that the man has arrived, and Luc gets a look at him, he almost gives himself a serving of his own tongue. How could he not have known that Daniel Sheridan was the most gorgeous man he'd ever seen?

With his reputation on the line and his lust unbridled, at the end of the meal Luc finally comes face to face with his adversary. Domination fantasies still flying in his mind, he offers Daniel a tour of his kitchen, then proceeds to show the critic just how good he is in it...to their mutual pleasure. Shocked by the intensity of the experience, playboy and manslut Luc is suddenly dealing with an emotion beyond his own arrogance, but just as he's ready to admit that his time with Daniel was much more than a one-off, Daniel slaps at the chef with his own pride and sweeps out in a huff.

One captivated chef with entitlement issues, one uptight food critic who is no man's amuse-bouche. The path to happiness has never been quite so calorie-laden.

I enjoyed several aspects of Scarlet Blackwell's series debut novella. This is my first experience with Blackwell, and as a fan of all sorts of cooking shows (can't cook, don't want to learn, love watching - ah, the wonderful contradiction that is me) I enjoyed the setting and the characters' occupations quite a lot. The writing was polished and the story flowed nicely. It was short, and as an erotic novella the focus was on the sexuality of the story. The development of the relationship between the characters was very limited, but Blackwell showed off some skill with a smooth narrative that captured my attention. The sex scenes were explicit and graphic and very sexy. If it weren't for one tiny problem, I would have loved that aspect of it.

Unfortunately, the lead characters were the problem. They were odious. Luc's complete arrogance and slut puppy ways were problem enough. I sure wouldn't eat in his restaurant knowing how he treated his cooking surfaces. That's just unhygienic! And just as his character started to improve and I started finding his over-the-top determination to woo Daniel sort of endearing, Daniel - who I found a bit bitchy but not too bad at first - became a complete ass when he met up with Luc the second time.

I never bought for one minute that this romance was based on affection, as both characters were almost completely unlikable to me and even to each other throughout most of the story. Maybe had their been more time to display a more organic about-face on Luc's part and someone had pulled the gigantic stick out of Daniel's derriere (bopping his head with it a few times once removed wouldn't have hurt, either), I would have enjoyed this story a lot more. As it stands, Just Desserts is just too full of empty calories to satisfy.

Return from Just Desserts to LGBT-M/M

Return from Just Desserts to One Good Book Home