Points for Creativity and Sarcasm 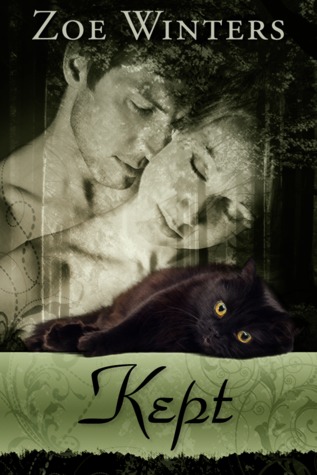 I have to admit, there were a few rocky patches in Zoe Winters' Kept (Blood Lust, Novella 1), but there was also quite a bit to like, most notably the snappy dialogue ripe with sarcasm and sardonic humor between the cat therian (don't use 'were,' they find it offensive) Greta and the big bad sorcerer (who's not nearly as bad as everyone thinks) Dayne. With a surprising amount of exposition that defines an intriguing world and unique mythos, Kept is rather an unusual novella. Most short stories and novella's I've read either focus more heavily on the relationships between the characters and are softer on plot and backstory, or focus almost exclusively on the plot and provide only sketchy ideas on the characters and the world around them. This novella fell into the in between.

Greta, bookstore owner and cat therian (turns into a domestic short hair) is just days away from the first full moon of her 28th year, a very important year for shifters, when a terse call from her mother draws her into spying on a conversation between her mother...who she finds out isn't her real mother...and her step father Simon...who is actually more than her step father and the leader of their tribe. What Greta learns there and what the woman she's always called mother tells her when Simon's back is turned has Greta fleeing to her best friend's house for some clothes before racing across town for the protection of the most powerful sorcerer in town, Dayne. But Dayne and Greta's tribe have an acrimonious history and Dayne isn't much in the mood to get played by another were, no matter how long and luscious her legs are. Greta is right, though, they each have what the other needs. Dayne has the protection and Greta has the blood, and if they could learn to trust one another, they'll both find real magic.

It's a great premise, and I really got a sense of the world Greta and Dayne live in, which surprised me, considering the length of the novella. I was equally surprised when I found myself chuckling now and again in several scenes between Greta and Dayne as well as their inner monologues. They were fun characters. Neither one were completely consistent; Greta especially flipped back and forth between independent, powerful woman and trembling potential victim with startling frequency, but I enjoyed spending some time with them.

It's just when anyone else was in the scene that the problems began in this novella. Greta's conversation with her best friend Charlee when she was first on the run from Simon seemed stilted, unnatural, and unbelievable, and conversation between Greta and Simon late in the novella was cliched and a bit too absurd to be truly threatening. That entire final confrontation seemed very ill conceived and oddly non-threatening, actually, and I had a hard time maintaining my willing suspension of disbelief through the final few chapters.

The relationship and dialogue with Greta and Dayne didn't have the same issues, though I do think there were parts to that I wish had been more fully developed and written out, as the sex scenes felt perfunctory and unsatisfying and the budding romance virtually nonexistent, but more importantly, lacking any sense of lasting emotion beyond embarrassment. I think the novella would have benefited from more time given to their relationship and certainly would have preferred it over the contrived conflict at the end.

I can't say this was the best novella I've ever read, but there certainly was enough promise to continue the novella series, and parts of this one I did like very much. I just hope the author continues to develop the character aspects of a story and fleshes out interactions between them. There's potential there and I hope to see it thrive.

Thank you for the fair and honest review! I hope you like Claimed and Mated. I feel they are both stronger works. Hope you agree!

Zoe,
Thank YOU for the gracious response to my review. I want to commend you again for the amazing job Kept did on world building. I've already downloaded Claimed and Mated and will be getting to them shortly. I look forward to it. LOVE sardonic humor between characters and was truly impressed with the richness of the world you created in that short novella. I hope to hear from you again!

Thanks, Tracy! The banter is what I love the most about romance. :D

Also, it's fairly rare to come across a reviewer who can really get across what they don't like about a book without being nasty about it. I really appreciate the fairness in your reviews.

Return from Kept to Paranormal Romances