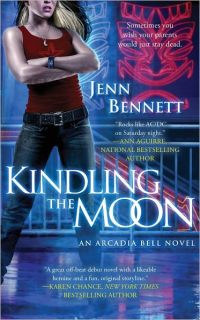 Two weeks. Fourteen days. That's how long Arcadia Bell has to live unless her parents turn themselves in to the rival occult order that holds them responsible for the brutal murders of several of their top occultists seven years ago, serial murders known as the Black Lodge slayings. Now that they've been caught on video surveillance, thus proving they're alive and their deaths had been staged, the Luxe Order is intent on bringing them to heel and making them pay. And her cover is blown right along with theirs.

Seven years spent hiding. Seven years spent away from her parents. Alone in a way that most people can't imagine. Arcadia Bell...though that's not her real name...managed as best any young magician could between the ages of eighteen and twenty-five. She carved out a life, however transient, and even made friends (not that they know who she really is). She opened a demon-friendly bar with one of those friends, practicing her magic on patrons when necessary as she serves as both bartender and de facto bouncer. She dated - occasionally, ate, shopped, practiced her craft...lived.

Seven years of that life, gone in an instant...and strung out on an excruciating two-week deadline.

Difference is, now Arcadia is an adult, and she's always been a bit different than other magicians. The circumstances of her birth set her apart that way. She has no plans to go gentle into that good night without a healthy dose of raging against the dying of the light first. In short, she plans to prove that her parents were not responsible for the crimes they've been accused of committing. Even if she has to track down the murderous demon who was used as the weapon, summon him from the Æthyric plane, bind him, and force him to bear true witness to whomever actually wielded him as such all those years ago.

Of course, that plan could - and probably will - get her killed long before the deadline is up. Still...it's a plan.

Welcome to the wild world of Arcadia Bell, gifted magician, skilled bartender, and two-tone haired hedgehog owner. Settle back, kick your feet up, and prepare to be entertained as Cady, with the help of the delicious but taciturn Earthbound demonologist Lon Butler, works to piece together the clues from the mother of all cold cases and identify the demon who killed three people before Cady is sent to her death in her parents' stead. It's gonna be a heck of a ride.

Bennett has created an exciting new world of demons and occultist magicians, fleshed it out nicely and explained it in such a way that didn't make my head feel like it was going to explode! I can't sufficiently express just how wonderful and rare that is. I don't normally do too well with books that heavily feature the woo-woo magic. It's not that I dislike the books, it's just...no matter how "clearly" spells, incantations, and magical rules are explained, I struggle to understand/picture it. I swear, it's like I have a magic comprehension disability or something.

I can't say I got every bit of magical world building that Bennett explained here, but I got most of it, and felt comfortable with it. That's a nice change.

She also created Cady Bell, series star. I liked her. Maybe she didn't wow me or instantly make me fall in love with her, but she was definitely a very nice blend of self-sufficient and competent magician, and quirky, sometimes emotionally awkward young woman. She's hip...with a pinch of nerd and a dollop of bad ass thrown into the mix. I think I'm really going to like seeing how her character progresses through this series.

Lon Butler was a bit of an enigma to me. Earthbound demon, single father, and a bit stoic and cautious by nature, he was an interesting character. It's weird, but I'm not completely sure how I feel for him as the romantic interest and Caty's partner in investigation. Famous photographer by trade, demonologist by design, he blew a little hot and cold for me, and like Cady, I had some trouble reading his intentions and emotions. I think that was on purpose, though, so I don't think I can really complain. I will say, the scene with Lon and Cady on the plane was one of my favorites in the book. I just loved him expounding on the instances he had thought he'd made his feelings and intentions for Cady known.

Okay...I'm going to damn myself but good here, but I have to admit I feel a little odd about the difference in their ages. Sure, give me a 2,000 year-old vampire and a twenty-something young thing finding their forever love and I'm fine and dandy, but a forty-two-year-old man (Earthbound, whatever) dating a twenty-five-year-old woman gives me a bit of a squig? Seriously? I'm disappointed in myself on this one, trust me. You'd think age difference would matter not at all to a PNR/UF lover - hell, that's what I thought, myself. Still, something about the difference in their ages and experiences (which reminds me...I'm a little tired of the ubiquitous demon/vampire/werewolf sex club, thanks) and a few of Lon's life choices (concerning aforementioned sex club) didn't sit completely comfortably with me.

I intend to get over it, though, because I love, love, love Lon's son Jupe and I want him to be a part of the series for a long, long time.

Kindling the Moon is definitely one of the more exciting and entertaining urban fantasy series debuts I've read recently. Bennett writes an easily readable narrative (even for someone suffering from MCD - magical comprehension disability) and has a strong grasp on her characters. The world is fresh, the plot was meaty and had quite a few surprises (one in particular was a real doozy), and the characters are likable, with an aura of character longevity that bodes well for future books. I'm looking forward to seeing what comes next for them all.

"I don't normally do too well with books that heavily feature the woo-woo magic."

*giggles* I agree! I haven't read this one yet but it's on my list..it looks like a fun book

Yay! A fellow sufferer of MCD! I don't feel so tragically alone anymore!

*Laughs*
It IS a fun book. I look forward to your review when you read it, Mandi! ;-)

Return from Kindling the Moon to Urban Fantasy

Return from Kindling the Moon to OGBDA Book Review Home