Kiss Me If You Can 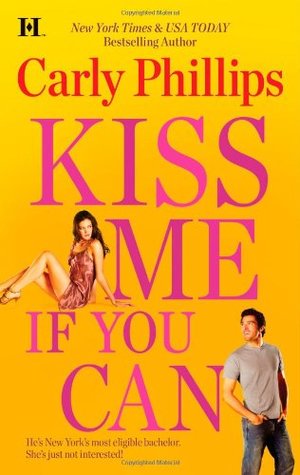 Sam "Coop" Cooper is the crime beat reporter for NY newspaper, but he's on the other side of the story when he foils a jewelry store robbery in progress and gains fame as New York City's newest most eligible bachelor as a result. Rewarded for his efforts with his choice of jewelry, he quickly pockets a gaudy ring with embarrassment for all the attention, just hoping the ring is invaluable enough to not be missed too much.

Footloose and travel-ready Lexie Davis is in NYC for her grandmother's eightieth birthday before jetting off on another of her many travel jaunts around the world. A childhood heavy with stiffling parents and heavier responsibility turned her into a wanderlust free spirit, a quick-to-leave, never-to-commit type, and her job as a web designer suits her wandering ways just fine. When she catches the news coverage of Coop's crime stop, and sees that the ring he chose so closely matches a beloved necklace of her grandmother's, she sets herself on obtaining the ring from Coop for her grandmother's birthday present. Getting past the scads of desperate females that a bachelor blog in the paper has set upon the man, however, makes her quest particularly difficult.

Once she's got her target in sight - and what a sexy, roguish sight it is - the attraction between them is instantaneous and powerful. The only problem...he's a man of home, hearth, and routine and she's a woman of travel and adventure. Those sorts of problems may just be insurmountable.

Kiss Me If You Can is supposed to be, I think, a relatively light contemporary romance with a bit of mystery and relationship angst thrown in, but unfortunately, it didn't work for me on a lot of different levels. The premise for the characters meeting seemed a bit of a stretch, and the bit about desperate women clamoring for eligible bachelors, sending undies and all other assortment of unmentionables was disturbing - and as a reasonably sane (I think) single woman, a little offensive. It did little but muddy the plot waters with sad detritus and debris. The mystery wasn't all that mysterious, and the two lead characters came together and acted on their mutual attraction a little too quickly and with too little relationship and character development for my tastes.

Be that as it may, that isn't really what sank this book for me, and there were positives to add some balance. I liked the secondary characters of Charlotte and Sylvia quite a bit and found their personalities added some color to the story. I think some of the family drama between Coop and his father and brother, as well as between Lexie and her parents, was good conceptually, and the impact of those relationships was well represented in Coop's and Lexie's characters. The problem for me was that neither situation really made either character sympathetic. I know it's probably a character flaw of mine, but I don't find two successful, good looking, financially secure adults who are obviously still affected by childhoods with families that were far from abusive all that likable when they start moaning about how bad they had it growing up, or how their families don't really understand them, or how those families are responsible for their various peccadilloes now. It didn't work for me, and especially in Lexie's case, didn't endear me to them.

And about Lexie - I couldn't understand at all the serious soul searching necessary when facts about her grandmother's youth came to light. Again, her entire sense of self was far too heavily predicated on the influences of family, and for me, that robbed her of her independence and individuality as a character.

Still, though, that isn't what really sank the book for me, though it would have relegated it to a three star rating, because altogether, the issues I had with the story and characters weren't enough to dislike the book, just weren't enough to like it either. What truly sank it was the ending. Out of the blue a not-too-mysterious mystery and light romance peppered with quirky characters and a couple of leads who weren't all that compelling but not too offensive, either, took a sudden and bizarre dark turn (details withheld to prevent spoilers) with lives being threatened and weapons brandished. That sudden turn came out of nowhere, with nothing to allude to it and very little, if anything, to foreshadow it. It did, however, allow for a couple of characters to reach their epiphanies about their relationship. Which didn't surprise me at all, but sure did disappoint me, because it made the entire end of the book seem contrived and the culmination of the relationship between the leads ultimately cliche.

It's a shame, really, because I was very much in the mood for a light romance with quirky, likable characters. I didn't need much plot, really, not after the last few books I've read. I was easy pickin's as a reader when I started Kiss Me If You Can, and would have enjoyed just about anything. Except this.

Return from Kiss Me If You Can to Contemporary Romance Genre