One of My Top Reads of the Year 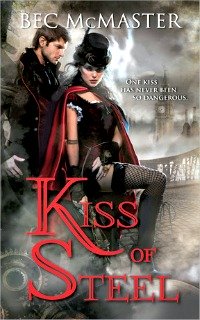 When her father was murdered and the Blue Blood responsible put a price on her head, Honoria Todd slipped out of the city proper with her younger sister and brother. They disappeared into the rookeries, into the fringe of life on the edge of Whitechapel. For six months she's been using an assumed name and practically starving as she works to the bone to feed her family and keep her brother's illness at bay.

The rookeries have their own version of a king, and no one dares cross the rogue Blue Blood known as Blade. If you're under his protection, no one would dare hurt you. If you're an enemy, the angels themselves couldn't save you. And as Honoria scurries home from her much-needed job, hiding herself along the journey to keep secret where she lives, one of Blade's people waylays her and lets her know a chilling fact. She's been summoned for an audience with the king.

Blade's viral count is dangerously high. He's already showing signs of the first symptoms of the Fade, that slow, inexorable descent into madness that will change him from man to monster, from blood-drinking ruler of the rookeries to mindless, ravening vampire. He doesn't have much time left.

Blade views Miss Todd, and yes, he knows who she really is, as a pawn. He's aware that his most reviled enemy, the member of the Echelon responsible for his infection and, ultimately, his sister's death, is hunting Honoria and her siblings. The price on their heads, most notably Honoria's, is extremely high.

He doesn't know why...yet...but he'll find out. And he'll use that knowledge to get what he wants. That's what he does. That's what he has always done. Then again, he's never before met anyone quite like Honoria Todd. And as he gets to know the fiercely prim warrior that challenges and resists him at every turn, even when exhausted and half-starved, he comes to realize something almost miraculous for it's simple truth. The king of the rookeries, battle-hardened gang leader and borderline monster, has met his match.

But with a voracious vampire cutting a bloody, deadly swath through Whitechapel and his own Fade creeping ever closer, the damnable truth is that it may just be too late for him. It may be too late for them all.

Wow, what a spectacular debut this was! I loved everything about it. The world was gritty, dangerous, and dark, the characters were full of strength and passion and furious honor...even as they danced along the gray line between black and white, and the story was action-packed, dangerous, and powerfully emotional. Hands down this is one of my top three reads of the year to date. I'm definitely the most excited I've been about a new series in a very long time.

I'm still sort of a steampunk neophyte, so I don't have a large reservoir of material to compare, but I loved the mix of steampunk and paranormal in this fantastic romance. The steampunk elements were fairly low key, which might bother true enthusiasts, but my largest passion is paranormal romance, so this worked just fine for me. I'd even suggest the steampunk-curious try this one to get their toes wet. I think it would be a good way to delve into the genre.

The whole grimy, soot-stained, virus-ridden world felt deliciously fresh and original, and I adored what was a completely new take on both vampire and werewolf mythos here. The ruling Echelon, with their infected blood rites and power-hungry House structure, was freaky-scary in concept. Considering they were knowingly and enthusiastically infecting themselves with a virus that demands blood-drinking and would lead to their eventual destruction when the virus overwhelms them, it all seemed a rather profound statement on the vagaries of vice and power.

And Honor and Blade were fantastic main characters. Honor was everything I could have ever dreamed. Fierce, intelligent, independent, proud, she was both a free thinker and riddled with prejudice and fear, stubborn and generous in equal measures. She sometimes took wild, dangerous risks, throwing herself into battle for those she loved, and she would defend them to the death. She stood up to Blade, a man who is everything that most terrifies her, even when he had her completely at his mercy. I liked her as a person and respected the hell out of her character, even when her obstinacy regarding Blade started to really frustrate me.

One of my favorite things about this book was that it wasn't just me that it frustrated. Blade was quite vocal in his frustration with Honoria, as well. That was a fantastic thing to read. I can't tell you how many times I've suffered with a mind-numbingly frustrating heroine's sundry issues only to curl my lip at the hero's seeming limitless patience for - or obliviousness to - those issues. Sometimes it's just nice to see a hero call her on it, be affected by it, acknowledge it as the head-cracker it is. Blade did that, and I loved it.

That's not the only reason I loved Blade though. He was...it. The perfect "it." Bad boy with a heart of gold, borderline monster with a soft spot for his woman, honorable crook, violent protector, the most loyal libertine. And he had this unguarded tenderness in him for Honor. Against even the warnings of his own people he wanted her and took care of her, fought with her and yearned for her, protected her and wanted to throttle her. He was jealous and adorable with it, fierce and sexy as hell with it, resolute and uncompromising and utterly trustworthy with it. He was, in short, perfect. Even his flaws were perfect.

Together their chemistry was tempestuous, emotional, fraught with tension, and absolutely incendiary.

Combine two awesome characters with a perfect complement of memorable secondary and ancillary characters, give them a layered, complex plot with several meaty, overlapping plot threads to keep them racing against time and evading danger, and you have this book. I was in reader heaven. I loved the story, the journey from the opening words to the final sentence. Villains and their villainy, hopelessness, loss, injury, lust, threat, risk, failures and triumphs littered the whole of the book in such a way that every chapter was an odyssey.

Some story elements surprised the heck out of me, some I'd figured out fairly early, some made me nervous and some made my gut churn with dread, desperate for it all to work out. The overall plot did absolutely everything it was supposed to do. It entertained the hell out of me.

Books like this are exactly why I'm so rabid about reading. I was transported into McMaster's world and held there until she deigned to let me go. Her writing is a stylized joy, her imagination a fierce weapon, her sense for story and character a tremendous gift. And I'm thrilled, just thrilled, that there is more to come in this series. I can't wait.

My first time here! I'm glad you have a list of your "favorites" because YOU'VE READ A LOT OF BOOKS!!!

I've never read any steampunk and I know it's been so popular. I've wanted to try some but it's hard to know where to start. I love that you and other reviewers take the time to write reviews. I've written a few here and there just to be supportive of authors I like and they are a lot of work. :)

Hi, Wendy! Welcome to OGBDA! I'm happy you stopped by. *Grins* And yeah, I do read a lot. Always have.

I think this book by McMaster is particularly good for Steampunk newbies. Especially for those who have a background in paranormal romance and/or historical romance. There's not A LOT of Steampunk in it, more a taste that threads throughout it, so you could find out how you feel about it.

Thanks so much for your comment and for stopping by! I hope to chat again soon.

Return from Kiss of Steel to Steampunk

Return from Kiss of Steel to One Good Book Home