Knock Me Off My Feet

Packed a Heck of a Punch 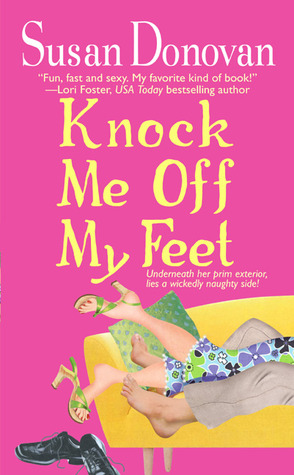 Autumn Adams is Homey Helen, the Chicago maven of helpful home tips, like how to clean anything and what tricks to use to polish the floor. She inherited the job from her imperious mother as a death-bed commitment and has been miserable in the roll ever since. She's the antithesis of Homey Helen, with her horrible cleaning habits and her disregard for order and neatness, her spaz-girl ways, and her tomboy recreations. She's a mess and she knows it; horrible at relationships, a loss with details, at home in chaos.

When the creepy letters started to come to her at the office, she blew them off. It was her good friend Griffin and her assistant and long-time surrogate mother, Marjorie who convinced her to call the police when the tone of the letters went from vaguely threatening to outright dangerous, her tires got slashed, and dead flowers started arriving for her. Someone not only hates Homey Helen, he wants her dead.

They're not going to get what they want, if Chicago Police Violent Crimes Detective Stacey Quinn has anything to say about it. He and his partner are on the case, and his captain has cleared their other cases until this high profile death threat is resolved. Quinn's more than okay with that, as the longer he spends with Audie, the more he wants with her - until what he wants can be summed up in one word: everything.

She's flighty and messy and a total spaz. He's solid, organized, and always thinking before he speaks. And if he can convince the emotionally damaged Audie, he's thinking about forever. With her. If a madman doesn't put a deadly crimp in his plans first.

My first experience with Susan Donovan's books is definitely not going to be my last. I enjoyed Knock Me Off My Feet, which is a romantic suspense that leans more towards the lighter side of entertainment thanks to the lead characters, spasmodic Audie and bagpipe-playing Quinn. Despite the lighter tone, there's plenty of true pathos with the quagmire that is Audie's neurosis about her incapacity to love and Quinn's guilt and issues with his baby brother's death and a previous relationship that ended very badly. Donovan has also filled this book with a rich and full cast of secondary and ancillary characters with whom it was a true pleasure to spend time.

I wasn't totally sold on everything in the book, though. I can appreciate that Audie was definitely a unique character, but I struggled with her now and then. She was a bit too much of a spaz for me at the beginning, and even after she grew on me I had some issues with her very serious case of emotional ADD, wildly swinging emotions without much impetus behind them. A question asked or a comment made to her and she was foot-stomping mad one moment, teary-eyed and down the next, and a few moments later was back to her playful, more sunny self. It was a bit like watching a family reunion in Sybil's head at times. One scene in particular, during Quinn's bagpipe concert, she went from abjectly horrified and furious to cozy and seductive in a jarringly short amount of time. From a character perspective, it made her seem inconsistent to a sometimes disturbing degree.

The suspense aspects of the plot arc were another part that gave me some trouble. There didn't seem to be much realistic police procedure during the investigation, and Quinn's behavior was highly inappropriate on more than one occasion. My preferences, even in a lighter or comedic romantic suspense, tend towards a more accurate representation of a criminal investigation. But that's simply a personal preference and didn't effect my enjoyment too much. What did, however, was the identity of the perpetrator of the crime. Not the fact that I had figured out early on who was responsible (that's more common than not), but the depth of unsubstantiated hatred the villain had for Audie and the questionable reasons for it. I didn't feel like there was enough development to satisfactorily explain the villain's behavior being directed at her in such vitriolic fashion, so that behavior seemed more of a contrivance than genuine aberrant behavior from a sociopathic personality.

From a more technical standpoint, there were a few places where the dialogue lost a natural conversational flow and seemed stilted...and sometimes just odd. There were also some grammar and several punctuation issues, but I wonder if that was more the Kindle formatting that got messed up than actual errors.

But there was also the good stuff...and it was really good stuff. I loved every aspect of the relationship development plot threads. That's where this book really shined for me. I was quite happy with the pacing in the evolution of their relationship and the manner in which their feelings for each other developed. I adored the characters while it was developing. There were times when Quinn just melted me. In fact, every time he murmured, "Come to me, Audie," it sent warmth right through me. I thoroughly enjoyed his character, and I liked Audie very much when she was with him. In that regard, this book was one of the better lighter-themed romances I've read lately.

And the sex scenes? Wow. Talk about being knocked off my feet. They were the perfect blend of tasteful eroticism and gut-clenching emotion, and it wasn't until I read one of the featured scenes in here that I realized how infrequently it seems lately that the depth of emotion in a sex scene is given enough attention...or maybe I'm just not reading the right books. Knock Me Off My Feet was the right book. It clarified for me that describing or writing a sex scene is one thing, drawing your characters together into a sensory onslaught, a physical and emotional maelstrom that shudders through the pages and into the readers hearts is something else entirely, and in my opinion, Donovan managed that to exquisitely devastating results. Loved that, and applaud Donovan for it. Knock Me Off My Feet definitely won't be the last I read of Susan Donovan, but I'm sure glad it was the first.

Return from Knock Me Off My Feet to Romantic Suspense Genre