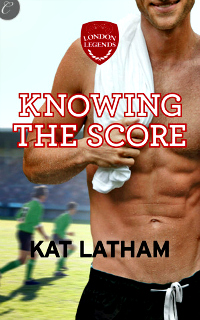 Rugby superstar Spencer Bailey learned a valuable lesson when he was nineteen. Women and rugby don't mix. During the season, he's focused, intent, and celibate. Between seasons, he prefers short term arrangements with women who know from the start their relationship will be temporary. That discipline has helped him both on and off the pitch.

It's been a year since he's been with a woman, but just when Spencer should be able to get back into the swing, so to speak, his grandfather suffers a heart attack and almost dies. In fact he would have died if it hadn't been for Caitlyn Sweeney, who saw his grandfather collapse on the street and kept him alive long enough to get to the hospital.

The pretty American is everything Spencer enjoys most about a woman and she has the added benefit of only being in the country for a few more months.

International disaster relief worker and environmental engineer Caitlyn Sweeney gets nervous around large men and they don't come much larger than the perfect physical specimen that is Spencer. Even while her girly parts are dancing a jig that the gorgeous guy is interested in her, she's completely incapable of acting on her mutual interest without doing something completely mortifying. Like almost biting the guy's tongue off when he tries to kiss her.

She'll have to apologize for that. And really, Spencer may be is exactly what she needs to take care of that pesky little problem she still has. It really is the perfect opportunity. Her visa is expiring soon; she's leaving. So long as she keeps her secrets about her tragic past and he is willing to be patient with her, there is no reason at all that they can't both enjoy each other for awhile without it turning into a big, heartbreaking mess.

Of course making that decision and living it are two very different things. For both of them.

I have to give credit to Latham. This story has several elements that I don't like in my romance fiction, one of which is even usually a complete deal-breaker for me, yet most of those elements had such a well-developed foundation and believable reasons behind them that they worked for me in this context and didn't lessen my enjoyment of this cute, heart-filled romance in the least.

Outside of historical romance, virgin romance heroines do not work for me. Not usually, anyway. In this case, Caitlyn's traumatic past, her plain-spoken honesty about her issues in the face of crushing humiliation, her intent to triumph over them, and the touches of humor that lightened the tone of some of her efforts, made it all fit in such a nice way that I ended up feeling just fine with it all. That was a fairly large and pleasant surprise.

It helped, too, that Caitlyn's personality was so stellar and her job was so interesting. She was far, far more than her virginity in this story. Her past may have crippled her, but she was exceptionally competent, self-aware, and independent in all other areas of her life and I liked her very much as a character.

Spencer was just a complete doll. Sure, he was hot and sexy and all that, but it was his good humor, his genuine kindness and patience, and his love for his grandfather that really made me fall head over heels for him. And I loved him with Caitlyn. It was more than sexual chemistry (which was just fine on its own merit), there was the sense of a true accord between them, a friendship just as strong as their romance. Loved it.

I also love a good sports romance, but I do think it translates better for me when I have at least some basic understanding of the featured sport. Unfortunately, what I know about rugby could fit on the head of a very small pin. I appreciated Spencer trying to explain it a little to Caitlyn, because that was exactly the simplistic tutorial I needed, too, but I just couldn't quite connect to it as I do the sports I'm familiar with. Thankfully, the sports angle wasn't a huge part of the overall story.

The arc of their romance and the plot of the book were both strong, satisfying elements of the story. I loved when Philip was visiting Spencer in London. He was a great secondary character and I adored him. After he returns home, though, and the story widens its focus to include more detail about Caitlyn's career, the intensity of the relationship between her and Spencer really starts to build up nicely. Until a romantic plot twist that sparked the inevitable romance conflict, anyway.

That plot twist was another element I don't like in my romance fiction, but again, I have to credit Latham for providing the necessary foundation for it. I didn't see it coming, but the ground had been laid to allow for it to be plausible and realistic, and I can't help but admire that.

I hated the subsequent relationship conflict it sparked, though, and have a few personal issues with what Caitlyn was going to do in the situation she was in. Any time I read that in a book it lessens the appeal of the heroine for me. No one deserves to be subjected to that sort of life-long loss, regardless of what he has or hasn't done, and neither do the other concerned - and completely innocent - parties. Anytime a romantic heroine even starts to contemplate that choice, it smacks me across the face and drops me right out of the story. It's one of the reasons I loathe that sort of plot twist to begin with.

It takes some pretty satisfying emotional resolution to circumvent the disaster of that conflict, and while what was there in the denouement of the book was definitely good, I don't know that it fully mitigated what were some pretty unpleasant scenes in the climax. I still absolutely enjoyed the book and really liked the romance and the characters, but that relationship conflict did leave its mark and ended up being the largest factor in this being a book I liked, but didn't quite love. It's a solid read, though, and very enjoyable all around.

Return from Knowing the Score to Contemporary Romance

Return from Knowing the Score to Sports Romance

Return from Knowing the Score to One Good Book Home