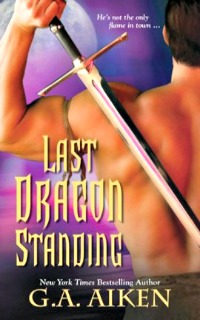 When I pick up a G.A. Aiken or Shelly Laurenston book, I know a few things about it even before I start to read. It'll make me laugh and it'll provide a decent story while doing so. If the book is under Laurenston's name, it'll be crass, bawdy fun...with some dismemberment tossed in for kicks. If it's Aiken, outlandish and hysterical familial one-upmanship that takes sibling rivalry and family squabbles to a whole other universe...with some dismemberment tossed in for kicks. There's a whole dismemberment theme, really. I know something else before I even start reading, too: I'm going to love it.

In Last Dragon Standing we return to Aiken's land of dragons and warrior queens and spend time with the Lightning dragon Ragnar the Cunning. He's been summoned by Queen Rhiannon after their two year alliance and though he's not happy about it, conscripted to bring her son Eibhear - the baby of the family - home for a visit after spending two years with the Lightnings during Ragnar's war to unite his people's clans. She's also commanded him to bring with them her suspected traitor of a sister from her home in self-imposed exile for a face to face. Little could please Ragnar less than that, for sure.

Well...there's one thing that could. One dragoness, in fact. Keita the Viper. Two years ago the queen's daughter...and a princessly bundle of vain, vapid insipidness...with a nasty streak a mile long...had left her mark in his chest and he hasn't had relief since, so when he comes upon her while making a dramatic execution speech before the law in the town executes her for killing their Lord, Ragnar realizes his life just went from complicated but manageable to...absolutely out of control.

He hates her, she hates him. He wants her, she wants autonomous freedom. He's Cunning and she's...something else entirely. Soon truths reveal a new danger threatening the Southland dragons and Queen Annwyl's Dark Plains both - an unbeatable foe and a terrifying invasion that threaten the lives of them all and perch both kingdoms on a teetering precipice of survival. Ragnar and Keita have to work together to protect throne and country, and with the help of family and friends, prevent an impending war. Or start one.

Now, if they can just keep from killing each other...

There's so much to like about Last Dragon Standing that I don't honestly know where to begin. I was thrilled with the intricate, layered plot and complex characters - in fact, Keita and Ragnar may be the most complicated individual characters that Aiken/Laurenston have penned. They're no more simple than their relationship, and it works for this book, which almost had a feel of a transitional piece in the series.

Back are all the characters we've met and grown to love in the previous three books, and a new and mysterious threat to Annwyl and Fearghus' two children add an additional layer of tension and delicious plot to the story. So, too, the growing conflict between Eibhear and Izzy, which provided several poignant and interesting scenes. The family moments will always be my favorite parts of each of the books in this series - I just can't get enough of the characters and family dynamic. In part because each of the characters are so brilliantly unique and flagrantly individual, and in part because Aiken excels at maintaining character definition through each book, falling into a new book in the series is as decadently satisfying as a healthy supply of Godiva...and far less fattening.

I wasn't totally thrilled with the journey from the north to the south with Ragnar and his brother and cousin, along with Eibhear and Keita and her companion Ren once they joined them. Keita hasn't been my favorite of Rhiannon's hatchlings, and while I was of course looking forward to her story, I was a little disappointed in that journey. It had humor and much dischord between Keita and Ragnar, but it lacked some of the interpersonal relationship zing of similar travels in other books and the pacing seemed a little slow. That was resolved for me when Keita and Ragnar met with Queen Rhiannon. From that point to the end it was a roller coaster of humor, intrigue, mystery, danger, and intensity that I adored.

I have to admit, though, this book doesn't provide the sweeping and incendiary romance that was so prevalent in previous books. There's a relationship between Keita and Ragnar, but that relationship is far more subtle and less encapsulated in this novel than those in the others. I can understand where that may bother some readers, but after I thought about it for awhile, I can't say I was disappointed. In fact, quite the opposite. I actually commend Aiken/Laurenston for keeping tight reign on the relationship between Ragnar and Keita and staying true to something more in keeping with both the characters' nature and the goings on around them. Because of who Keita is in particular, and what she does, anything more than what was offered between these pages would have seemed forced and inorganic, and nothing kills my appreciation of romance faster than that.

There's also less of a conclusion to this book than in the others and that was a bit of a surprise. Not a cliffhanger, by any means - I loathe those - but definitely a more open-ended conclusion than I was expecting. I didn't find that unpleasant or tedious, as I took that to mean that the series is not done. My sincerest hope is that it won't be done for quite some time, because I'm nowhere near tired of the ribald and rambunctious antics of the dragon kin and their human and not-so-human mates, friends, cohorts, and adversaries. Nothing makes me laugh like a Laurenston/Aiken book...and I'm not ready to stop laughing.

Return from Last Dragon Standing to One Good Book Home