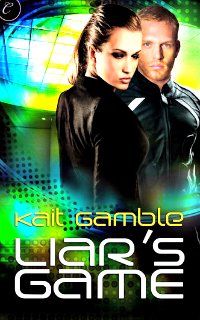 Space pirate Aurelia Popkiss has issues. Then again, so does every member of her crew, so she fits right in as their fearless leader. It works for them.

Finding a stowaway in with the booty of their latest haul adds a new wrinkle to their lives, though. Aurelia doesn't trust the young Kateryn, but even she couldn't guess the price her and her crew would pay by having her aboard her ship. She has a sneaking suspicion that the young woman has her own agenda. What she doesn't know is that agenda might put a permanent end to Aurelia's pirating days and to the lives of the crew that have become her family.

Short and fast-paced, this novella wasn't as much fun for me as I'd hoped it would be. I liked the characters and the premise of the story quite a lot. Female captain of a crew of space pirates; what's not to like? Unfortunately, there was so much going on in so few pages that the plot just ended up seeming chaotic and rushed, and the ending was pretty abrupt.

The strongest part of the story for me was the characters. I really enjoyed Aurelia and her crew. I liked how they interacted, and their relationships felt very organic and real. I would've been happy to have more backstory and more time with them without the wackadoo stowaway Kateryn. I also wish the romantic elements between Aurelia and Keys had been a larger part of the story, because the little bit I got at the end just wasn't enough to make this really feel like the romance I thought it was supposed to be.

There just wasn't quite enough in some areas and way too much in others for me to really like this one. It was okay, and not a bad way to spend a couple of hours reading, but ultimately I think this one will be largely forgettable.

Return from Liar's Game to One Good Book Home