Definitely Sexy But Not What I Was Expecting 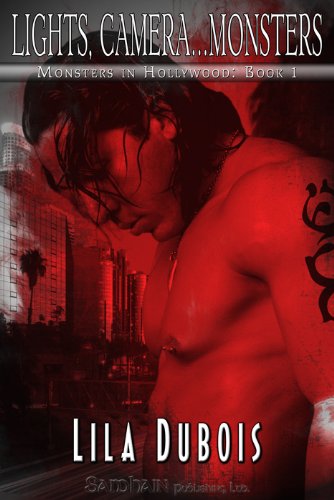 Lena and her four best friends run a production company in L.A. They're hip, trendy, and current, and they're building a stellar name for themselves in the industry by focusing on quality entertainment. She is always on the lookout for promising new clients, but never had that promise held more appeal than when three utterly delicious men walk into the conference room. It may have been the worst sales pitch she'd ever heard, but the apparent front man of the three, a stunningly gorgeous man named Luke, stirs all sorts of juices in Lena. Despite the waste of time the meeting turns out to be professionally, she suggests a further discussion between the two of them that night over dinner.

It wouldn't have been difficult for the dinner to go much better than the meeting had, but even Lena is surprised to find out that above and beyond how attractive she finds Luke physically, she is even more entertained by his companionship. Their chemistry is off the charts and the sex is phenomenal. There is, in fact, nothing that could dim the exquisite memory of the best night of her life...until she wakes up, rolls over, opens her eyes, and sees a seven-foot tall, winged, fanged, shaggy monster in bed next to her.

That's pretty much when the screaming starts.

Convinced some monster had eaten her new lover, Lena is both terrified and pissed, and it takes a hurt and embarrassed Luke a while to calm her down enough to explain that he hadn't been eaten and he is, in fact, a monster. And that he and his friends had come to her company in desperate hope that they could help launch a preemptive campaign to prepare humanity for their existence without sparking panic and causing the relentless slaughter of the last of his kind.

Hollywood: gateway to public opinion and recent home to a sex god of a monster. Lena does so love that town.

It's not just about the amount of sex in the book, which is a lot, or the level of graphic description, also a lot. Nor is it the light kink, which was fine. It was the fact that all of those things combined and became the largest part of the story by far, substituting romance for sex, eclipsing an anemic external conflict plot thread, providing virtually no character development, and overwhelming the limited world building and mythos creation.

The concept of the story is a bit kitschy and kooky, but it is definitely original. The characters were ill-defined and two dimensional, but endearing (especially Luke). There was more than one plot hole, but the guilty pleasure I took in the humor and random bouts of comedy kept me from focusing too heavily on it. And the external conflict was appallingly bereft of development and was so quickly resolved it was laughable, yet...I can't deny that I found it all rather entertaining.

I had a hard time believing that the monsters call their species monsters, though. That bothered me a lot, and didn't make a lot of sense in the big picture. They have their own language and their own culture, have hidden themselves away from people, but they define their species based on human preconceptions and labels? That didn't track for me.

Yet despite the drawbacks, I found myself oddly drawn in and more than a little captivated by Luke in particular, whose intense efforts to fit in completely charmed me more than once. I wish there had been more time allotted to Luke and Michael and Henry together, because their scenes were showstoppers. And I didn't detest Lena, which is definitely a point in the books favor.

In truth, I wish I had started the book with the advanced awareness of its erotic nature, because I think my expectations would have been different and I would have enjoyed the read even more. That being said, I can't complain at the price I paid (gotta love those free Kindle downloads), and don't feel like it was a waste of time. In fact, there was enough promise and potential in DuBois' writing that I'm interested in checking out the rest of the series in the hopes that the smutty, sexual, lightly kinky fun shares the page with a more well-rounded and better conceived plot and fully formed characters.

What Other Readers Have Said:

Hey, Amelia. Thanks for your comment! I totally understand why you'd rate it lower than I did, and I agree, the balance was off. In fact, I felt the story was grievously underdeveloped and the "conflict" at the end was a poorly timed and abrupt plot device that was largely unsuccessful. This is one of those titles that I ended up feeling more favorable towards than the technical and story aspects of the book really warranted. It was Luke. I was charmed by his earnest attempts at human behavior, his confusion, and his sensitivity over his monster form. But yes, if I were to look at it strictly objectively, I'd go with a 2.5 stars, maybe a low 3 stars, because the sex was well done, but even for erotica, it was a sparsely developed plot. I tried to explain in my review that I recognized the failings, but that my overall opinion was skewed by Luke. Maybe I didn't do a good enough job on that. Sorry! :(
I'm so glad to hear from you, though. Thanks for expressing your opinion!
Happy reading!
~ Tracy

Luke was the one saving grace of the book. Do you plan on reading the rest of the series?

I got this one as a free Kindle download. If the others were free, I would. I'm not sure, judging by what I read, that I'd pay to continue. I've got a huge TBR pile of books, though, so regardless, I wouldn't be reading the rest anytime soon. How about you?

I got it free on my Nook and I have a lot of other books both in my TBR pile and list that I would want to read first. I was thinking of finding some reviews of them to see how the "plot" progresses.

If you check up on that and notice the reviews imply an improvement (as in...actually HAVING a plot) let me know. I'm not above shamelessly changing my mind in pursuit of reading enjoyment! Thanks!

Return to top of Lights, Camera...Monsters