Powerful Emotions in a Small Package 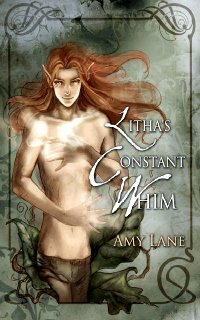 As unique and magically peculiar as the sidhe are, none are quite like Whim. Flighty, forgetful, adorably but perpetually inconsistent, Whim isn't a very powerful sidhe. Power struggles, dominance displays, and general strife just don't hold his attention. Nothing does, really. He's the freest of all free spirits.

Nudged by his prince to step beyond his Green's Hill home, Whim passes into the mortal realm on Litha, the night of the summer solstice. Whim had no idea that taking that one risk, slipping outside his comfort zone that one time, would change his life forever.

Charlie, a troubled young man on the cusp of a horrendous decision, is knocked sideways by the sheer presence of Whim. The chance meeting redefines Charlie's understanding of the world and sets the two men on a path that will span more than a decade, molding their lives year by year. It will define them. Remake them. And all of it will happen in one-night-a-year increments, when the magic of Litha allows them to come together in ways that both inflame their senses and alter their souls.

But when an immortal sidhe falls in love with an all-too-mortal human, the journey their relationship takes has one inevitable conclusion. The damnable irony of it all is that unless Whim can work magic far, far beyond his capabilities, he will lose Charlie for the very reason he first won his heart all those years ago.

While I think this Lane series debut might be slightly more entertaining for fans of Lane's Little Goddess series, with its concurrent timeline and character crossover, I enjoyed the characters so much, and felt so much for their relationship, that I still liked the read quite a lot despite having never read that series. It's a long novella-length romance; there isn't a lot of world definition for readers new to the world, nor any significant external plot conflicts, but there didn't really need to be.

Whim and Charlie really were enough for me. Their relationship was a sexy, angsty, wildly emotional quagmire that sucked me in and kept me locked in place. I loved Whim's character evolution throughout the book. He was the primary focus of the narrative, so I felt closer to him by default, but Charlie's growth from nearly-man to fully-man, seen in snippets and yearly summaries, was just as profound in its own way.

I wish there had been a bit more substance and detail in the read. Another fifty pages that further fleshed out Green's Hill and Whim's life there, or filled in more of the secondary and ancillary characters, would have been appreciated. What Lane does exceptionally well in this story, though, is offer readers a sweeping romantic epic in a tight, fresh, original package that's just a bit smaller than my greedy little heart wanted.

It would have been nice having the Little Goddess series as a background, but I didn't feel like the story suffered overly because of it. I just think it dimmed a bit of the emotional impact for me. Maybe that's not a bad thing, actually, as this little gem packed plenty of powerful emotion on its own. Enough to satisfy the romantic in me, for sure...and, okay, make me tear up more than once, too.

That's a testament to Lane's ability to make readers care about her characters.

This book, like so many of her work, made me cry... it was such a beautiful story. When I read this I hadn't realized it was part of a larger work, but like you said, you don't have to have read the others to get this one. Really great review!

Thanks, Mariana! Happy Holidays, too!
Lane really packs an emotional punch, that's for sure. I haven't read many of her books, but those I have definitely leave an impression. Highly recommended for angst-lovers, for sure!

This is such a beautiful story that I enjoyed immensely. The characters were well done and believable. The romance was sweet, sincere and strong. The cover is fantastic too. I would definitely recommend this book.