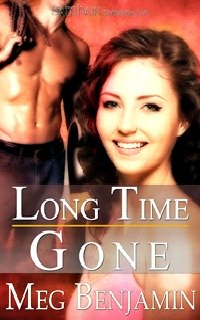 The eldest of the Toleffson brothers has long known he's the black sheep of his family. His three younger brothers are all good guys. Erik isn't. Cal, Lars, and Pete are happily married to equally good women. Erik isn't. The three also have successful careers they enjoy. Erik...well...he might have that, if the puke-face mayor of Konigsburg stops trying to get his butt fired even before his probationary period as Chief of Police comes to an end.

And then there's Bambi... Well, her name is Morgan Barrett but she's got these incredible eyes that remind Erik of...actually, never mind that. Morgan's managing Cedar Creek Winery while her father is on the mend and she's running herself ragged working sixteen hours a day trying to prove herself. When she met Erik, she was so exhausted she yawned in his face, but other than that, it was a great first impression. Heck, at least she wasn't drunk like he'd first thought.

After a rocky childhood and hoodlum youth as a bully who was too fond of booze, Erik doesn't drink. Morgan works with wine. Erik is quietly trying to make up for a past where he tormented his brothers. Morgan is desperate for an ounce of respect from her father. Erik's just doing his job, Morgan's trying to make one for herself. And somehow, though they are definitely different and complicated individuals, they're sort of made for each other.

Welcome back to Konigsburg.

I admit, I've been waiting for Erik's book since his character was first mentioned. I thought his history was an intriguing counterpoint to the almost too-good-to-be-true brothers (emphasis on almost) and as the series progressed I became more and more interested in him as a character. He always seemed so deserving of redemption and yet certain he wasn't. I was more than pleasantly surprised to find out that Long Time Gone had more going for it than featuring my favorite of the Toleffson brothers; it was the best book of the bunch for other reasons, as well.

There was much more of the Konigsburg, Texas quirkiness that I so enjoy. This delightful tourist town is full of odd and unique secondary and ancillary characters who add a depth and sense of Texas culture to each story. The first book in the series, Venus in Blue Jeans, was full of it, but the two subsequent books didn't feature the town quite as much - to their detriment, in my opinion. Thankfully, Konigsburg is back in all its quirky glory in Long Time Gone, including the shenanigans of a biker weekend and a wine festival. I just love that town and its inhabitants.

Morgan and Erik are great characters, richly layered and complex. Erik, for all his regret for his past, and all that he doesn't feel worthy of redemption just yet, is a good man with a strong sense of right and wrong. He's strong and dependable, and so drawn to Morgan that he's adorable with it. Morgan has her own inner strength and a sharp mind for business. She's got issues with her father, but her work ethic is impeccable. And the way she's drawn to Erik, accepting of his darker impulses, is heart warming.

Benjamin paced the development of their relationship nicely, and their progression through the story felt very organic and true to them as individuals. The book has a nicely layered plot arc that highlighted Erik's and Morgan's individual strengths and delved into their issues as it blended their lives together. Some of that blending was smooth, some a little ragged for the sake of conflict in the story, but it was all creative and realistic. I found myself more than a little enchanted by the journey.

I just felt this was an all around a better book than the previous three. Deeper and more interesting characters, better character development, a stronger and more comprehensive plot with pleasing layers, exceptionally well suited romantic pairing, and a background full of the quirky and odd town of Konigsburg all enhanced my reading enjoyment. I've been a big fan of this series from the very beginning, but this book just really worked for me on almost every level.

The only thing that kept this from being a fully five star read for me was the absence of a scene with the brothers in which they finally resolved their dark past. The road to redemption is more like a broken sidewalk - it's pitted and cracked and definitely uneven, littered with the detritus of life. But for those who truly seek it, and walk it diligently, it should lead to resolution and forgiveness. At least in fiction, anyway. I wanted that for Erik - that moment when he got to lay down the burden of his past and move forward with his brothers' unilateral forgiveness. Things are better for them, yes, and there has no doubt been an acceptance of the past and a burgeoning renewal of their brotherhood with Erik included. I was just hoping for a little more and I'm left feeling a bit of the bittersweet in its absence.

Meg Benjamin has hit her stride in Long Time Gone (Konigsburg, Texas Book 4) and while the Toleffsons will definitely hold a special place in my heart, I'm thrilled that the Konigsburg saga continues with Brand New Me. According to Meg Benjamin's website, this fifth book in the series will be available December 7th. That's definitely good news, because I'm not ready to move out of Konigsburg just yet. I'm hoping I don't have to for a long, long time.