Lord of the Abyss

My Favorite of the Series 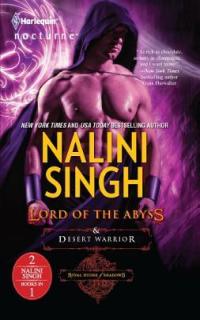 Disclosure:   An ARC of this book was provided to me by Harlequin via NetGalley. This rating, review, and all included thoughts and comments are my own.

He was the youngest of the four royal children of Elden when the Blood Sorcerer conquered his kingdom and slaughtered his parents. Prince Micah had been saved along with his siblings by the powerful spells the king and queen cast with their last breaths. Saved, but thrust far from his homeland, no memory of who he is or what was done to him almost twenty years ago.

He knows only that he is Lord of the Black Castle, Guardian of the Abyss, powerful in both form and magic. He hunts the souls of evildoers, casting them into the Abyss beneath his castle to suffer unending torture for their sins. He is darkness, feared by all and alone in his reign.

Then a homely young woman shows up in his castle, full of prickly attitude, daring to look at him and speak to him as no one ever has. It perplexes and intrigues him.

Liliana has secrets she's keeping from the imposing master of the castle, and time is running out. She has risked everything to find Micah. Now she's got to stir the memory of a prince who has no recollection of his past, no knowledge that her own father killed his parents, destroyed his homeland. And she can't ever let him know that she is truly her father's daughter, a blood sorcerer like him.

The horrors that her father visited on her as she was growing up are unspeakable, but they forged in Liliana a fiery determination to end his existence. She will do whatever it takes to bring Micah back to himself, get him to Elden. Only then will her father's brutal reign end and the four royal siblings be able to reclaim their heritage and heal their land.

And Liliana understands and accepts all the impending sacrifices that will be required of her to assure it.

The Royal House of Shadows series has had highs and lows for me, but overall, I ended up liking the concept of the series more than the books included in it. Until this one, anyway. I waited a long time to read this, despite Nalini Singh being one of my favorite authors. I just wasn't convinced even her considerable skill would deliver on what would have to be, by design, the most important book of the entire set.

I loved the story of Micah and Liliana. Loved it. And I loved them. Singh kept the storyline relatively simple, focusing on the main characters and their evolving relationship, with a few threats from the Blood Sorcerer thrown in for good measure, including a few scenes of Liliana's past that were...suitably horrifying.

That simplicity served the tale well, giving Micah and Liliana a chance to spend quality time together. There were tons of priceless moments between them and I loved every one. Unburdened by much in the way of secondary characters, the relationship the two of them forge while awakening Micah's memory and falling for each other was fabulous for me.

Micah is an oddly innocent man-child in ways, one that's also scarily powerful and commanding, comfortable in his role as Guardian but oblivious in interpersonal niceties. He lives a very black-and-white existence that I found compelling. Liliana is resolute and self-sacrificing, but also surprisingly strong and delightfully impertinent when dealing with the growly Micah. I loved that she is a homely young woman, and I loved that Micah thought she was beautiful.

I stopped caring how these books fit into the series a couple of books ago, but still enjoyed the closer connection to those story elements. The familial connection between Liliana and her father, rotted and corrupted as it was, made this book seem more relevant to the quest to defeat him.

Maybe that's why the climax of this story was such a disappointment to me. For all that I loved Micah and his Lily, the great battle between the siblings and the sorcerer that has been building through four different tales was utterly anticlimactic and abrupt. Maybe it had to be. Maybe the nature of four books by four different authors demanded that it be so. I had hoped otherwise and was disappointed.

It was, though, my only disappointment in this particular story. The romance between Lily and Micah and the whole of their tale up until its climax was a thrilling and satisfying read in every way. This book includes a second story by Singh, Desert Warrior, originally released back in 2003. That story was not to my personal taste in any way and I skimmed through most of it. My dislike of it, however, did not impact my appreciation for Lord of the Abyss, and my rating is for that first story only.

Return from Lord of the Abyss to Paranormal Romance Genre

Return from Lord of the Abyss to OGBDA Book Reviews Home