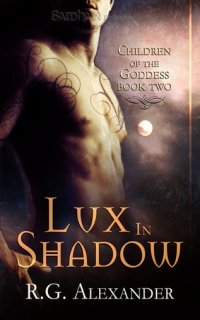 Series:   Children of the Goddess, Book 2

Lux Sariel has been tormented by guilt in the five months since his lover was slain by the old and feared enemy, Les Loups De L'Ombre, the Shadow Wolves. It has changed the once easy going and openly sexual Trueblood healer, making him a male of control and self denial. On a quest to find the protected sister of the now dead Shadow Wolf leader Grey Wolf with the gorgeous and sexually aggressive Dydarren werewolf pack Alpha Arygon, the fruitless search and sleepless, nightmare-filled nights are getting to him. And so is Arygon.

Arygon Dydarren knows he is anathema to his people, a male who seeks sexual companionship from other males, but ever since he first set eyes on Lux Sariel, he's had hope. The Goddess would not have given him a male mate if She thought he was worthless. Lux may be stubborn as all hell, but Arygon is sticking by him, putting himself right in his face until the vampire sees what's right in front of him. And when he catches scent of the female werewolf they'd been sent to retrieve, and he and Lux finally see the ethereal beauty for the first time, Arygon realizes something that Lux is too guilt-laden to see or sense for himself. Lux Sariel doesn't just have one mate...he's got two.

She is Antara, the bogeyman of her people, the destroyer. Since she was a child, Sylvain has been kept hidden, kept safe, but it has been a safety that's limited her contact with the outside world and ostracized her from her people. She is the werewolf who cannot change shape, the one who stands in the space between, and according to the true legends, and against all male superstition, she is not to destroy, but to save her people. And her first scent of Lux Sariel tells her two things, the prophecy has begun...and Lux is her mate.

Arygon and Sylvain have a bullheaded mate and a prophecy to see to, and Lux isn't cooperating. And only the three of them together will be able to change the course of both of their species. The Mother Goddess has deemed it so.

Picking up shortly after Regina in the Sun left off, the story shifts focus to the Trueblood vampire Lux Sariel and the werewolf Alpha Arygon Dydarren, two characters we met in the previous novel, and their quest for the sister to Grey Wolf that Regina asked them to find. Lux is hardly recognizable as the weight of his recent past weighs on him, but his emotional state and the reasons behind his motivations are wonderfully described and detailed. Arygon is a nice counterpoint with his unashamed sensuality blanketing a core of vulnerability and a tragic, heartbreaking past. I enjoyed both of their characters and applaud Alexander's ability to pen realistic emotional consequence to her male characters.

I wasn't as pleased with Sylvain, but that's no criticism of the author. Her character is well written, given depth and a realistic backstory to explain her personality. My preferences, though, lie in stronger, confident female leads, females who know their own strength and mind and use it. Sylvain is far more submissive in nature than I prefer.

As in the first book, Lux in Shadow offers up solid story potential, building off the mythos previously defined. For that reason I wouldn't recommend this one as a stand-alone novel and would suggest readers start with the first book in the series to get a better idea of the world and the characters of Lux and Arygon.

The drawbacks of the first book, though, are felt even more keenly in this one, and I had some significant issues with the berevity of the non-sexual aspects of the plot. The exposition was handled nicely for those who have read the first book, but there wasn't much development given to the progressing arc of the series plot and almost nothing of consequence to stand out as a episodic book plot arc beyond the sexual relationship between the three lead characters. That's a huge shame, because Alexander went into such fantastic depth with the history of this world and the dangers threatening all of the species, only to skimp to such egregious degree on using that backdrop to develop an equally rich and robust story.

Bluntly put, there's just too much sex and not nearly enough that's not.

That impression wasn't helped along by the fact that Lux is a dominant who likes sexual control, and bondage came into play often. I like a little bondage and dominance as much as the next gal, but to the exclusion of all else isn't to my taste, so it's possible I'm biased, but the sex seemed more about physical pleasure than emotional connection and the emotional connection between the characters felt lacking in ways it hadn't been between Regina and Zander in the first book.

I would love to see what Alexander can really do with this dark, twisted world she's created and the vibrant, three dimensional characters she can develop. So far the focus seems to be more on the sex than on the story, especially in this book. A better balance between the two would definitely take this series to a whole other level.

Return from Lux in Shadow to Paranormal Romance Genre

Return from Lux in Shadow to OGBDA Book Reviews Home