Disappointed in Lyon and Juliette 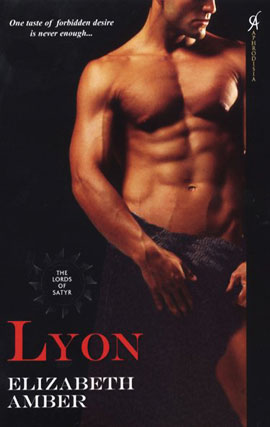 In Tuscany, three half-satyr brothers rule and nurture the vines of Bacchus, god of wine, until a letter arrives commanding them to marry the three half-fae daughters of the dying fae king. Lyon, the youngest and most magnificent specimen of the three, takes off to Paris to find his intended. He's not too happy about it, either, though he will do his duty. When he catches the scent of Juliette, however, his realizes his task may be less about duty and more about desire than he'd ever dreamed.

Unfortunately, Lyon's story did not live up to the promise of the earlier two books, much to my disappointment.

I will say that I've enjoyed how Amber has managed to broaden the mythos of this series and with each book deepen the historical flavor with a realistic blight on the vines of Europe that has been a plot thread through the series. I also credit her flawless ability to pen erotic scenes that are hot, graphic, and intense, yet not so explicit that they seem out of touch with the rest of the narrative. Also with each book, I've noticed Amber giving more attention to creating story around the two lead characters, and none more so than she did in Lyon.

In that regard, I've stumbled upon the double-edged sword, because that is where my issues with the book begin. In relation to the plot, I felt there was too much time and attention given to Juliette's situation and her life independent of Lyon and not nearly enough time developing any sort of chemistry or bond between the two of them. There was plenty of opportunity given on their two week trip from Paris to Tuscany, yet the author chose to skip over that trip completely after the first day. And everything that followed while they were in Tuscany read more like a rushed and condensed synopsis than actual developing events, leaving me feeling short changed, especially as to the closing of the circle of the quest for the three daughters that comprised the epilogue.

It wasn't just the plot that caused me problems, though, and in fact, that wasn't even the most troublesome. Two simple facts were an even bigger issue: I didn't like how Lyon was portrayed and I couldn't stand Juliette. The sensitive animal lover and fun younger brother we met previously in the first two books was absent in this incarnation of Lyon, and instead he seemed a rather simpleminded man-whore with no further ambition than to get his dangly bits polished, one female interchangeable with another and largely unmoved by it all. Juliette was a weak, laudanum-addicted, petrified victim that wouldn't recognize a backbone if it were an ingredient in one of her lauded recipes. I found her at turns tiresome and annoying. She only ever showed any spirit when she was giving Lyon a hard time, but given the rest of her character, I never bought that she'd actually do so, so that seemed out of place. And how she handled the first Calling once they were in Tuscany (details withheld to prevent spoilers) frustrated and puzzled me.

I could go on, actually, as there was more that befuddled and disappointed me, but when I think back on the whole of the book, I think I could've even forgiven the last if not for the one issue that outshines all the rest. There was not one point through the entire book that I ever got the feeling that Lyon and Juliette loved one another. Not once. Not even when Lyon was saying it did I believe it. There was nothing about love for Juliette in his actions with Sibela, that's for sure, and I was very disappointed with that storyline in particular. Admittedly, it didn't help that the idea of love wasn't even included in the book until the last chapter or two, but there was just nothing between Lyon and Juliette that spoke of anything beyond lust and attraction for the entire story. And I'm sorry, but for me, the book just doesn't work without it. I will be continuing the series because of my appreciation for Nicholas' and Raine's books, but had Lyon's book been the end of The Lords of Satyr, I would've been quite unhappy.