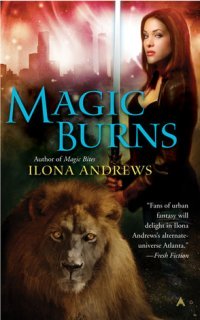 Kate Daniels is back. Four months ago, she found out who killed her guardian Greg and she made him pay in Magic Bites (Kate Daniels, Book 1). Now, as Atlanta shimmers under faster and more unstable fluctuation between tech and magic, Kate is working as a liaison between the Order of the Knights of Merciful Aide and the Merc Guild, taking gigs on the side to supplement the small but steady income. Her solitary life had fallen into something resembling normalcy. Then Jim calls with an offer to share a bounty. And Curran's ex-lover shows up in her office to beg Kate to speak to Curran about releasing the woman from the Pack so she can marry Kate's ex-could-have-been boyfriend Crest. And Derek shows up on behalf of the Pack to secure Kate's assistance in solving a sensitive matter of thievery. Soon Kate realizes that nothing in her life is ever simple, and normalcy is as fickle as the waves of tech and magic that buffet her world. At the height of a magic flare, the path to catch a thief leads to a shocking and horrific battle between two gods in an endless struggle for rebirth that will level what is left of Atlanta, leaving it dead and decimated. Kate races to find answers, but what she carries and the information she seeks could save them...or doom them all.

So many times in a series the second book suffers a sophomore slump, but Ilona Andrews, the nom de plume of the husband-and-wife writing team, doesn't collapse under that weighty Sword of Damocles. Instead, Magic Burns is even more accomplished than Magic Bites, and the world of Kate and acquaintances continues to be fleshed out with odes to lyrical decay. The plot of Magic Burns is again convoluted and complex - in all the best ways - and meanders its way through the book, gathering the flotsam and jetsam of character development and widening mythos as it goes.

Kate really starts to become human in this book, and where the first book seemed to keep me as a reader on more of a superficial level of acquaintance with her, this one allowed for much more of her depth and dimension to shine. She's still a total smart ass. She's still more likely to poke the big, snarling, shapeshifter King with a stick than pat his head, even when she's sure he'll rip her face off. She's still got a deep, dark secret that she can't tell anyone about - though by now, readers can guess what it is, if not given enough information to glean the scope and import of the matter. In Magic Burns, though, the affection for a child and the dedication to friendships made humanize Kate to satisfying levels and truly elevates her character to another, far more palatable level...even when she's being obtuse to frustrating degrees.

Curran and the Pack are back, as is Ghastek and Saiman, and new faces are mixed in with ones to whom we've previously been introduced. The connections between Kate and these characters continue to ground her in this dark, cruel world and continue to provide a bit of humor and a touch of hope to a woman who is quite possibly the most lonesome, fearsome heroine I've ever read. I was both impressed and oddly touched by a handful of profound scenes that brought forth with blinding clarity just how utterly and almost hopelessly yet willfully alone Kate is in the world. It's been her greatest strength. Her most relied upon safety. And, if Curran has what I think may be his way, her most transitory personality trait (loved the soup and coffee scenes!!).

I still have a few issues with the overabundance of description in this book and in the series. There is a fine line between painting a picture with words and filling a page with so much that the result is akin to a sort of mental static raging with white noise that blinds the reader to the fluidity of a scene. There was a lot of that in Magic Bites, partly because this richly detailed, decimated, confusing world was just being defined. There's less of it in Magic Burns, but unfortunately there is still enough to sort of fuzz out and bog down several scenes and muck up the timing of the pacing a bit. That's the only major problem I had with this book, and while there were a few other minor issues that nudged my willing suspension of disbelief, like the ease in which the child Red got into the supposedly impenetrable Order holding area to snatch Julie, that's really the only significant issue that kept this book just shy of a 5 star review for me. I'm a very visual reader - words paint pictures for me - and if the cacophony of a scene overwhelms me to the point that I can no longer picture it, pushing me to skim through descriptions to get to action and dialogue, there's a problem. I was pleased it was less of a problem in this book than the last and have high hopes for Magic Strikes (Kate Daniels, Book 3). Still, overall, this is a fantastic read and Kate Daniels is one of my favorite heroines in urban fantasy books today. 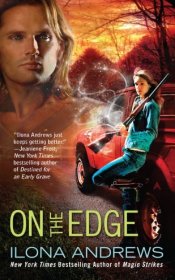 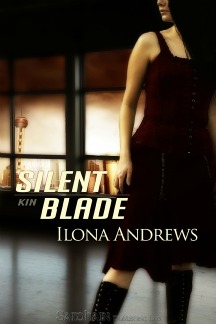 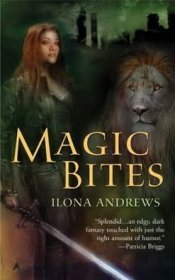 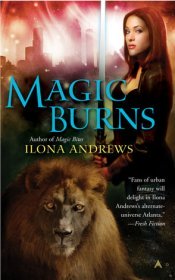 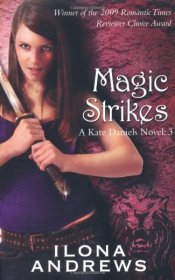 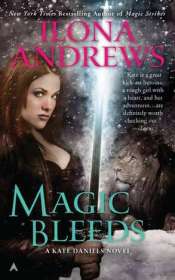 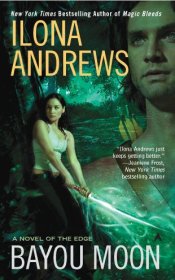 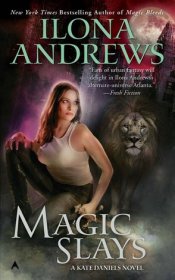 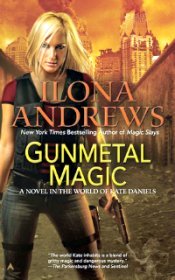 Return from Magic Burns to One Good Book Home