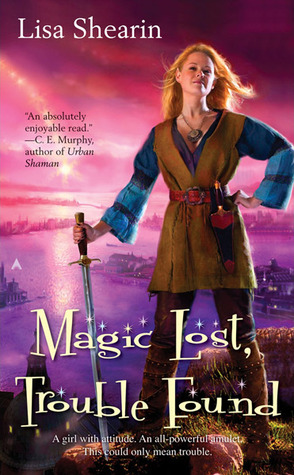 For Raine Benares, standing around in a stinking alley isn't the least she would do to watch the back of her friend Quentin Rand as he gets himself into yet another scrape. As well intentioned as her Samaritan act is, by the end of the night, she's going to wish it had been less than the least. A sorceress elf with average Seeker abilities, Raine makes a living finding things. Doesn't matter if the 'thing' is animal, vegetable, or mineral, she can generally find it. It, along with one or two other skills, are modest talents for her modest power level. Thanks to Quentin's thieving, however, Raine's power is about to get a serious upgrade.

Soon several big, evil bad guys in Mermeia are hunting for Raine and the necklace she's wearing, and they're wielding the sort of power that doesn't leave anything alive in its wake. That necklace sure isn't a style she'd pick for herself, but as much as she'd love to get rid of the damned thing, she can't. Quite literally. Now she's got to keep herself alive, but more important to Raine, keep her friends and family out of the path of a legendary evil intent on world domination. All in a day's work for Raine. She hopes.

Raine's predicament thrusts her and her friends into sticky situation after sticky situation, forcing her to deal with everything from bloodthirsty fire fairies to goblin politics. I enjoyed it. Lisa Shearin has created a rich, textured world of varying beauty and danger well populated with what I'd consider true characters - individuals who practically leap off the page with their vibrancy. Even the erstwhile thief Quentin, more of an ancillary character than anything, is imbued with a very three dimensional presence, so the heavy hitters in the character pool feel very much like living, breathing - and sometimes terrifying - people.

Shearin presents Magic Lost, Trouble Found in first person POV with Raine as the narrator. For two thirds of the book, I appreciated the subtle world building and development of mythos, introduction of characters, and definition of conflict that Raine's dry, sardonic, and occasionally self deprecating wit offered me as a reader. The first third of the book, however, wasn't included in that. I spent that third feeling at turns overwhelmed and confused by what felt quite a lot like exposition overload. I could tell that Shearin tried to temper that admittedly necessary information dump with the action of Quentin's theft and the danger of the goblin forces and more, and it's entirely possible that a reader who is more familiar with fantasy novels might be used to the necessary world building and set up, but I don't read a lot of fantasy and it seemed overwhelming to me.

That sense of being squished under the weight of a world being born lessened, though, and by forty percent in, I was so invested in the story and the characters that the rest of the book passed quite quickly (too quickly...though, that may be my new addiction talking) and as pleasantly as possible, considering the happenings. I admit, it took a little longer for me to come to terms with what felt like a nearly unemotional Raine Benares. Because the book is told from Raine's POV, her thoughts and impressions dominate the direction and plot of the book. Whether it's writing style or character trait or author's choice, those thoughts and impressions were quite devoid of any and all emotional expression, no matter how dire the straights or how intense the situation. A descriptive narrative painted pictures, defined characters, outlined - then fleshed out - the world, but not once did I get a sense of how Raine felt about what she was 'explaining' for the reader. Don't get me wrong...I appreciated her wit, I was impressed with her devotion to her family and friends - even the friends she doesn't totally trust...or only trusts so far. I was more than impressed by the fact that Raine is intelligent and intensely likable for that very fact alone, but she's also no one's victim, even when in peril, and I just love that about her. Get a sense of how she felt about things, though? Not so much.

That's an important distinction, actually, because knowing what a lead character thinks is absolutely vital to understanding that character and the world they're in, and it's vital to the story they're telling. It's imperative, period. But it's finding out how they feel that allows me as a reader to really connect emotionally to a character and their story. I can appreciate a story with my mind. I can like and admire authors who tell comprehensive, imaginative, original stories. I'm often quite dedicated to stories that I think are well told on a technical level. But all of that is strictly mental.

Make me feel as a reader and you own me. That's when characters do more than come alive, they grab me by the throat - ignoring my kicking and screaming - and drag me into their world, forcing me to feel with them, experience with them, all the joys, sorrows, triumphs and losses. That's when my enjoyment of a book transcends such academic terminology as 'appreciate' and 'admire' and becomes more like 'maniacal and devotional worship to characters and story and series.' Magic Lost, Trouble Found didn't quite get there. Maybe the series won't ever get there, but I mention it because towards the end of the book, I started to feel tuggings in that direction. Something about the last twenty to twenty-five percent of the book gave me a better understanding of Raine's emotional state and feelings about what was going on. It was still a bit dry emotionally, but less arid than it had been for the majority. I'm looking forward to seeing if that's a trend that continues into the next book, Armed & Magical. Not to mention, I can't wait to spend more time with characters that I really came to enjoy, even with their propensity to fall into trouble.