Mai Tai One On 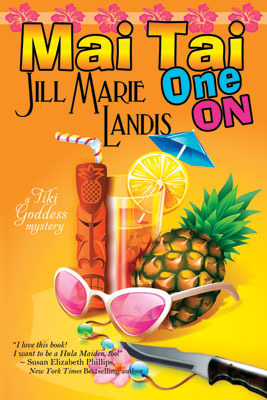 Emily Johnson, broke and newly divorced, came to Mauai to help her uncle, after the geriatric and pitifully bad dance troupe who performed at her uncle's Tiki Goddess Bar, the Hula Maidens, had contacted Em to inform her of his declining mental health and sent her a one-way plane ticket. In the six months since she started helping him out, business has improved and the historic hangout is slowly getting back into the black. And that's despite the bar's nearest neighbor, an odious man named Harold. He had a habit of burning trash in his yard, despite being asked not to, and the trades carry the noxious fumes right over into the bar.

That was, of course, before his dead body was discovered roasting in the bar's luau pit.

The police investigating his murder are focusing on both Em's uncle and the bar's bartender Chloe. Business has never been better but the stress has never been higher. Em, along with the wacky women of the Hula Maidens, have decided they have to solve the crime and save their family and friends. Delicious homicide detective Roland Sharpe would rather Em not pull a Nancy Drew impression, but stopping her would take more muscle than even he has.

Em's determination to clear her friend and keep her uncle's name clear puts her in danger when her poking around starts to uncover potential motives for murder. If the killer takes note of Em's secret sleuthing, it'll take more than the quirky Hula Maidens to save her butt. It'll take a miracle.

Maybe it was bad timing, as the past few books I've read really rocked my book-loving heart. Maybe it was my too-high expectations, as I've read books by Landis before and like her writing style. Maybe it was the setting, or the plot, or the characters. Maybe it's a little of all of that. Whatever it was, I couldn't seem to connect to either the story or the characters in this mystery, and that made it difficult to enjoy Mai Tai One On like I thought I would.

I was expecting a lighter-toned murder mystery laced with humor that highlighted quirky and raucous secondary characters. I went into the book thinking I'd fall for the Maidens and chuckle along with Em as she amateur-sleuthed her way into solving the case. Instead I ended up annoyed with Em's character, frustrated and disappointed by her morally and legally questionable actions and obtuse behavior which bordered on stupid more than once. The Maidens didn't appeal to me, either. There was too much back biting and snarky nastiness between them and too many waspish digs directed at others to consider them sympathetic or entertaining or make them evenly likable throughout the book.

Roland's character was forbidding and standoffish, and though I was interested in him as one of my favorite characters, he was too often relegated to the sidelines of the storyline for my tastes. The small sparks of simpatico and attraction between him and Em were some of my favorite parts of the book, but they were too few and far apart to truly impact my entertainment level with the book as a whole.

The plotline of the mystery was fairly straightforward and it evolved at a steady pace with a narrative that was smooth and easily readable. Unfortunately the elements of the whodunit weren't all that mysterious, and I had the who and why figured relatively early. That's not necessarily a detractor for me, and wouldn't have been in this case had I been able to enjoy the characters more, but without that, the fact that there were few potential killers or motives became more glaring. Later suspense elements of the story were equally disappointing and a little odd in their development. I didn't quite buy the perpetrator's actions or motivations during the last part of the book.

For me, the book was disappointing. The cover and the story description gives an impression about the tone of the book that I don't think the story supported, and I don't think Landis did quite enough to make her characters as flamboyantly entertaining as she could have. I can forgive one or two of the things that didn't work for me in this book, but put together, there just wasn't enough left for me to like. I don't think I'll be revisiting the Tiki Goddess Bar and its patrons.

Return to top of Mai Tai One On