Mark of the Demon

Rowland's Demesne is Urban Fantasy at its Finest! 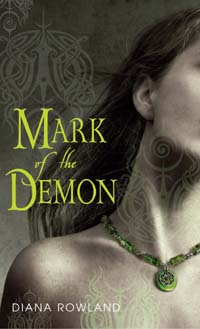 Beaulac Homicide detective Kara Gillian likes her chocolate donuts a little too much for her waistline. She's short, a bit socially inept, tactless and a bit crude, and as persistent as a terrier with a bone. She's not terribly beautiful, isn't terribly strong physically, and she hasn't ever had a boyfriend stick around longer than three months. Her childhood wasn't a walk in the park, and she dealt with personal trauma in not always the best ways. She's smart, and dedicated to her job as a cop, oh - and she's got a nifty ability to summon demons from the demon plane.

Sarcastic and witty, Kara is just flat-out fun to read, and she's so refreshingly real and layered, such a nice change from the leather-clad, kick-ass, superhuman, biker-type heroines of most Urban Fantasy series that I found myself pitching headfirst into this book, unable to put it down until the wee wee hours of the morning, after finishing every delicious page.

An awesome blend of cop thriller and paranormal mystery, Mark of the Demon is exquisitely detailed, richly plotted, and well-paced. Her characters are human, with histories that aren't always pleasant, and personalities that sometimes match. FBI Agent Ryan Kristoff in particular was a yummy treat. Sometimes he was a total fed, sometimes he was like a goofy kid, and never did that dichotomy seem out of place or undefined.

Rowland's life experience truly gave an absolute air of legitimacy to the police stuff and her imagination blew me away on the paranormal stuff. Her demons and the world in which they inhabit, glimpsed only briefly but so beautifully, are a breath of fresh air in a literary world gasping for it. Rowland does a totally kick ass job introducing you to them and to the world in which Mark of the Demon exists. It rocked my world and made me rock with laughter. It made me ache for the girl who suffered a childhood trauma and fell down a path of self-destruction and cheer for the woman who pulled herself off that path and doesn't let her past define or cripple her, or use it as an excuse to be horrible to everyone around her (or to herself). There was strength of character in Kara Gillian, and I appreciated it. And there were such delightful teasers in the book, hints of what'll be further fleshed out (I hope) and explored in the next book, Blood of the Demon, to be released in February of 2010. I. Can. Not. Wait!!

The only small criticism I have for the book was an early scene following the accidental summoning of Rhyzkahl, a demon lord. The subsequent scene seemed out of place and out of character, and the deeper I went into the book the more out of character it seemed upon reflection. I just don't see how Kara could go from being terrified beyond human comprehension and certain of her death to getting it on with the singly most destructive creature she'll ever meet, no matter how beautiful. I understood the compulsion bit, but when Rhyzkahl ceased that, the rest seemed jarringly out of place. As a result, that scene seemed sort of gratuitous and unnecessary.

That being said, I would like to caution those readers who like their violence or description of crime scenes to be glossed over. Rowland pulls no punches and hides no horror. It would be a shame to miss this book, but it may be necessary for you. That's not a criticism, as I happen to like the gritty reality of it and understand the necessity, but not everyone will or does.

Mark of the Demon gets a 4.5 stars (and a big HELL YEAH) from me. Highly recommended and much appreciated! Enjoy!

Return from Mark of the Demon to Urban Fantasy Genre

Return from Mark of the Demon to OGBDA Book Reviews Home