Mark of the Sylph

Lighter Tone of the Series Has Appeal 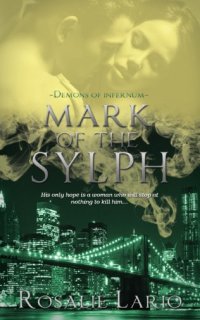 Disclosure:   An ARC of this book was provided to me by Entangled Publishing, LLC via NetGalley. This rating, review, and all included thoughts and comments are my own.

It was an accident, really. He didn't mean to kidnap the woman! He just wanted to talk to her, convince her to help him. Taeg had no idea the gorgeous Maya Flores would go all Buffy on his ass and try to slice and dice him. Hell, he hadn't even known until just recently that she could see through the glamour that he and his demon brethren use to blend with humanity in this dimension.

But that's also why he needs her so badly. College student and librarian Maya has a very, very special gift. A shockingly rare gift. And she may just be the key to his redemption. Um...well...unless she gets lucky and kills him first. And she's trying really hard.

Maya has known about the existence of demons for a long time, hating them all with righteous fury since the night two of them invaded her family's home. Back then she was just a terrified child hiding in the shadows, hearing every scream, every sick, slickly wet sound as they devoured her parents and sister. But she's not a child any longer. Now she's a vanquish-first, ask-questions-never sort of woman, so when the demon who calls himself Taeg Meyers follows her as she's leaving her job one evening, spouting some sort of nonsense about wanting to talk and needing her help, she goes after him like the evil fiend he is.

Only to end up knocked out and kidnapped, tied to his bed and at his mercy. And when the evil, monstrous demon has her in his clutches, he forces her to...to...well...to rethink her prejudices and feel an unwanted attraction, because Taeg is nothing - nothing - like she'd expected. But trust a demon? Help a demon??

Maya didn't even know if she was capable of doing so, let alone willing. No matter whose future is riding on it.

I have a particular fondness for a touch of humor in my reading, and in that regard, Lario's second book in the Demons of Infernum series worked well for me. Half-demon Taeg is a hoot, and while his character is perhaps a bit more stereotypical than individual, being the stud muffin, frat boy type with the ladies but a bit of a screw up with an over-inflated sense of responsibility when he compares himself to his überalpha older brother Keegan (Blood of the Demon), he's got a wicked streak that made me chuckle.

Maya was just as enjoyable in a lot of ways. Her willful persistence in labeling all demons as evil monsters who must die got old long before her tune changed, but she was a stronger, more independent female lead than Brynn was in the first book. Her past holds a horror that still haunts her, and one that meshed fairly well with the lighter tone of the book. It added a dimension and honed the darker edges to painful sharpness.

The external plot conflict didn't appeal to me as much as the characters did. Something about a half-demon searching for a mythical sword pushed me a bit outside my ability to willingly sustain disbelief. Maybe it's crazy, but I can accept that Taeg and his demon-hunting bounty hunter brothers are from another dimension and each brother is mixed with a different mythical race, I can accept that full-human Maya has the ability to see through glamour and has managed to off a few demons in her time, I can even accept that the end goal is to destroy the Book of the Dead, a plot thread carried over from the first book, but throw Arthurian legend on top of all that and it muddies the waters too much for me to buy it.

Hey, I never said I was without my idiosyncrasies.

My enjoyment of the humor and characters in this book was slightly offset by those weaker external plot threads that never quite made me feel a growing sense of impending doom or increasing tension prior to conflict resolution. Overall, the story seemed small somehow in comparison to the plot potential inherent in demon bounty hunters from another dimension. I am curious, though, as to where Lario is going to take this series next. If the appeal of the characters becomes the standard and a little more depth and complexity is added to the plots in the future books, this series could really start clicking for me.

Return from Mark of the Sylph to Paranormal Romance Genre

Return from Mark of the Sylph to OGBDA Book Reviews Home