Mark of the Witch 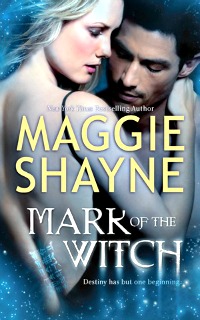 Disclosure:   An ARC of this book was provided to me by Mira publisher Harlequin via NetGalley.

As far as nightmares go, repeatedly dreaming of being violently sacrificed is right up there in levels of badness. Being ripped out of sleep with wounds that match the damage suffered in the nightmare, well, that's a whole other level of scary-weird. And former Wiccan Indira Simon had a greater understanding of weird that most.

This was too much, though, even for her.

Disturbed and more than a little scared, Indira turns to Wiccan high priestess Rayne Blackwood, a woman who had been her best friend before Indy gave up the faith. Indira tells her everything, including the fact that she doesn't believe the nightmares she's been having are actually dreams. Indira is pretty sure they're memories. Her memories. From a life she lived thousands of years ago.

Instead of questioning her sanity, Rayne believes her, and more, she agrees to help. Then she calls the one person she thinks will be able to help Indy in a way she can't.

Father Tomas is not like any priest Indira has ever met. He's young and gorgeous, first of all, and the bolt of attraction she feels when he introduces himself to her is just wrong on so many levels. But when he starts telling her about his calling and about her destiny, Indy is sure he has lost his mind.

But the nightmares she's suffering are doing more than leaving rope burns, they're turning deadly. Suddenly the stories Tomas has told her don't seem quite so unbelievable, and the visceral connection between the two of them can't be denied. But they also leave her with a few big questions, not the least of which is whether or not the good Padre is what he seems, or if he's an enemy in priest's clothing.

After all, being sacrificed in her dreams is one thing. Indira certainly has no interest in suffering it while she's awake.

I don't always know exactly when a book is going to grab me. Some never do. Some don't have to, if I'm well into an established series by a favored author (there's always one book that doesn't work for me for whatever reason). But most books do have to grab me at some point if I'm going to invest my time in reading them through to the end.

The grab-point in this first book in Shayne's new trilogy was this:

Dammit straight to hell, I was being sacrificed again.

There was just something about that line, practically oozing frustrated annoyance and incredulous disbelief at such an obviously critical moment, that tickled me. As it also happens to be the very first sentence of the book, I knew right away I was in this book for the long haul. And lucky for me, most of that haul was a right good time.

It was definitely a unique story, with several elements that I've never read before. True, many of those were a mixed bag of good and less-good, but for the most part it was a positive. I certainly enjoyed Shayne's authorial voice and her main character, Indira, and I loved the murky enigma of the good versus evil theme that trickled throughout the book.

Indy was a well-drawn, likable character. She was enough of a skeptic initially to be freaked out over what was happening to her, which added a nice layer of tension to the storyline, but she was also smart enough and open-minded enough to adjust her point of view as she became more and more aware of what was going on and the role she played in it.

I like that she didn't just take what people told her as rote, she also relied on her own feelings and experiences, and stood up for herself when her opinions differed from others. Even in the face of prejudice and hatred. I respected that.

In fact, I respected her far more than I would have thought given her backstory. This is a woman, after all, who disavowed her religion and stopped believing in magic because the spell she cast to find her soul mate didn't work. That point struck me hard, seeming childish and petulant from the moment that information was disclosed. I would have preferred a better (at the very least less cheesy) reason for Wicca to have fallen out of favor with her.

For all that I liked Indy, though, I wasn't quite as fond of Tomas. Though I am in no way religious, I have to admit, I tripped over the Padre being written as the romantic hero. There's just something about those little white tabs in those black collars that draws a line for me, making them big unmixy things with this sort of romance.

Shayne tried hard, though, I'll give her that. I could tell she put in the effort to make that work for readers. From the moment of his introduction in the book we know Tomas is no longer a man of faith, though the storyline does take his belief structure on a bit of a wild ride. There were also several things about his character in general and his priesthood in particular that seemed designed to allow for the relationship between him and Indy, though some of those struck me as altogether too convenient.

I'm not saying that I felt their relationship wasn't okay. I wasn't conflicted by Tomas and Indy as characters together - they seemed to suit each other fairly well. I just felt a little blocked by the collar and couldn't fully commit to their relationship because of it. It didn't help that when Tomas faces his mentor, a more vile and hateful character I've rarely read, Tomas acted like a spineless fraction of a man, one too conflicted by the shackles of misplaced duty to make a stand against the unrelenting prejudice of an obviously unbalanced psyche.

Which brings me to one of my larger issues with the story. For all that I really enjoyed the arc of the plot, and think the tale was solid in concept, I struggled through a large section in the middle of the book, and it started shortly after Indy and Tomas make it to the cabin. There was a pretty significant shift in the focus of the story at that point, one that included the evolution of the not-so-good Father Dom as a potential antagonist.

I loathed that man. Hated everything about him, trusted him not a bit, and would have loved watching his head explode in slow motion every time he spoke. Everything he did, everything he said, all the vitriolic bullshit he spouted, all of that just turned my stomach - and seemed far too transparent. Too much so for me to rationalize Tomas' continued obeisance to the man in the face of some pretty heinous behavior.

I was left wishing, especially after an odd and abrupt twist near the book's climax, that Dom's zealous lunacy had been dealt with in a more subtle fashion. As it was, it put too much of a strain on my willing suspension of disbelief, not only in regards to Tomas, but also with Indy and Rayne, who had no real motive to agree to spend even five minutes with that man, let alone work with him to find the amulet. But everyone just let the vicious old lunatic get away with saying and doing whatever horrific thing he wanted to and kept pressing on in their quest despite it, and that just didn't fly with me.

Still, I felt there were more high points than low in this book. I would have enjoyed a different ending with a bit more resolution and far more justice, but so many of the elements of the plot and story were fresh and unique, and Indy was so much fun, that overall I'm glad the first sentence grabbed me like it did. There is definitely much story left to tell in this imaginative blend of past and present, myth and magic, and I'd like to know what comes next.

Return from Mark of the Witch to Paranormal Romance

Return from Mark of the Witch to One Good Book Home