A Jagged-Edged Jigsaw of Ill-Fitting Pieces 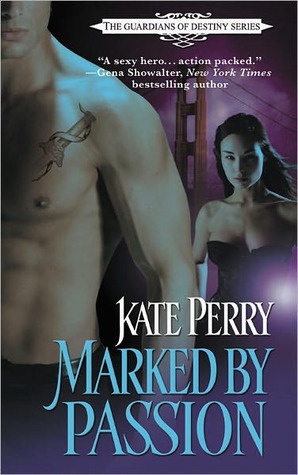 Marked from birth to be a Guardian of an ancient Chinese scroll and the power of the element of Earth, Gabrielle "Gabe" Sansouci Chin couldn't be any less pleased and has, in fact, spent the past fifteen years running from a destiny she loathes. A destiny that caused the death of her mother and ensured constant disappointment from her father. Now that her father is dead, the scroll has come into her possession and the power of the scroll has flared to life in her. The problem with that is that she has no control, wants nothing to do with learning control, and just wants it and all the responsibility it entails to go away.

As enemies emerge from the shadows intent on stealing the scroll and taking its power for their own, and a mysterious, sexy Rhys Llewellyn pops into her life seeming too good to be true, Gabe finds it harder and harder to tell friend from foe, and impossible to know whom to trust.

While I applaud Kate Perry's fresh voice and unique premise, and recognize her talents at writing a quickly paced narrative with fast, sarcastic dialogue (I have a huge fondness for sarcasm), I had too many problems with this book to enjoy it. I found the lead character, Gabe, to be unlikable through the first three-quarters of the book, and only passably tolerable beyond that. She seemed to have two goals in life, be a successful artist, and avoid responsibility at all costs. I didn't mind the first, but the second, given her comprehension of the inherent dangers of passing off her responsibility, made her seem immature, obstinately self involved, and ultimately stupid. As the story is told in first person from her point of view, thereby insuring the reader spends all their time in her head listening to her bemoan her wicked power and scary responsibility over and over and, well, over again, that's a large stumbling block. Unfortunately, it wasn't the only one.

The romantic plot arc between Gabe and Rhys seemed bizarre to me, mostly because there wasn't one. They didn't have all that many scenes together, and those they participated in mostly featured Gabe being a total bitch to Rhys, even as Rhys was trying to help her. And about Rhys. Yes, he was sexy, and he was my favorite character in the book, but the fact remains that he's not a nice guy. In fact, he was in San Francisco to steal Gabe's scroll and take her power - which he could only get by killing her. Sure, he didn't do it, because for some reason, he takes one look at her prickly, emotionally retarded, stubborn, belligerent self and "quickly realized" they were meant for each other (he must have gotten a much closer look at her than I did). And that was the majority of the development of their relationship. The rest was sexual chemistry, not romance.

And one thing kept niggling me about Rhys through the book... He didn't kill Gabe. He fell in love with her. Okay, but...the fact remains that he's the sort of man who would plan to kill an innocent woman to get what he wants, just because he wants it. I'm not sure there's enough sexy in the world to make that okay for me.

Then there were the plot holes and large gaps in logic. Hiding an ancient, powerful scroll in a refrigerator didn't seem all that stealthy, but then again, nobody tried to break into her apartment to search for it, either, despite the interested parties knowing exactly where she lived. Not very motivated scroll hunters, it would seem. And about Gabe's brother...no surprise there, in any way, shape, or form. I still don't understand why Gabe would repeatedly blow off her father's spirit, even when the power was making her sick. I get that she had issues with him, but it seemed a little like cutting off your nose to spite your face to me. He was the single person whose motives she could absolutely trust to help with her control, no matter how much she disliked him personally.

Truth is, though, the pieces were there for a good book with an original premise and interesting mythos, and I'm sure that Perry has the skill to turn this into a solid, entertaining series. I may not have been crazy about the plot, which didn't really go anywhere or contain much beyond Gabe's attempts to shirk her responsibility, but it was tightly written with little to no annoying filler. And honestly, had I not disliked Gabe to such an extent for so long in this one, I definitely would've enjoyed the book more and been more forgiving of the plot issues. I was also pleased with some of Perry's stylistic strengths. Unlike a lot of first books in a series, this book wasn't weighed down by excessive description, exposition, or world building. There was just enough to inform without being overwhelming.

I also genuinely liked that there were some dangling plot threads at the end, like the mysterious anonymous buyer of Gabe's last painting. They offered up enough teasers to make me at least interested in the next book. And I know that the heroine in the second book, Chosen by Desire, is Gabe's friend Carrie, which is actually a draw rather than a detractor. I liked Carrie far more than I liked Gabe and think she'd make a solid heroine in her own story.

Return from Marked by Passion to Paranormal Romance Genre

Return from Marked by Passion to OGBDA Book Reviews Home