Match Me If You Can

Tickled More Than My Funny Bone 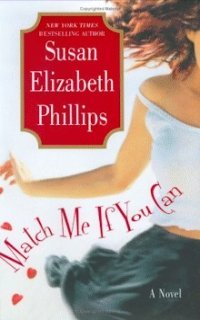 She may be the black sheep of her uber-successful family, but Annabelle Granger marches to the beat of her own drum. She's taken over her grandmother's matchmaking business, renamed it Perfect for You, and is determined to make it successful. As part of the quest to do so, she's gotten one of her best friends to set up a meeting with one of the most eligible bachelors in town, rich, gorgeous sports agent, Heath Champion. Annabelle may not have the first clue why Heath would need to go to a matchmaker to find a wife, but he's contracted with a rival agency and Annabelle is convinced she can get him to become a client of hers if she just meets him.

And things go exactly as planned...sorta. Well, okay, not really. Champion is an arrogant, overly entitled workaholic jerk and his demands are ridiculously unreasonable. Still, he's made a small concession and Annabelle sets her sights on making the most of the opportunity he's granted.

He's also sexy as hell...not that she's given that any thought.

Heath Champion has risen from poverty and survived an abusive father to become a self-made and highly educated man. He's an excellent agent and he dedicates his life to his clients. Now that he's approaching thirty-five he figures it's time he finds a suitable wife, but with his schedule he hardly has time. So he does the most practical thing he can think of; he hires a matchmaking firm to do it for him. Limiting his introductory meetings to twenty minutes, the ladies of Chicago are brought to him one by one between phone calls and business dealings, and it's going moderately well, he thinks. Until Annabelle walks into his office, late, looking bedraggled, and spouting off about her own matchmaking abilities. Two working to find him a wife has to be - at least marginally - better than one, no matter how little faith he has in Annabelle's dubious skills. Something about her, though, challenges him, and her absolute lack of suitable subservience to him is appealing in its own right.

And she's sexy as hell...not that he's given that any thought.

Susan Elizabeth Phillips has a fantastic romp in Match Me If You Can. Heath and Annabelle are great lead characters, and their dialogue is sassy, sarcastic, and so very much fun. The chemistry between them, first as friends, then as lovers, is some of the best in the genre, and Phillips is particularly good at the slow but realistic development of the relationship between them. Each character has personal issues and a few inner demons that add some depth and angst to the story and provides opportunity for personal development, and the arc of the story is fleshed out nicely with a strong supporting case of secondary and ancillary characters.

While it could be said that the concept of the story borders on the silly, and the actions of both Annabelle and Heath sometimes tread the line between fantastic and farce, for a light read that's pure humorous enjoyment, this book has made it to the big game and delivered more than just nifty commercials.

I wish I'd been as pleased with the minor plot thread of the relationship between Bodie and Portia, but I had a hard time with that one. It just didn't work for me. Maybe if it had been given a bit more room to grow and the characters afforded more development I would have been able to buy into it more than I did. Instead, I found Portia to be largely irredeemable until close to the very end and there wasn't enough provided for me to find her sympathetic through most of the book. I liked Bodie well enough, but again, would have preferred to have seen a bit more of him to get a better handle on him as a character. There were some deep issues motivating Portia, and some juicy details about Bodie's past. I think they could have supported their own story much better in a longer format.

I wasn't totally sold on the conclusion of Match Me If You Can, either. The story was moving right along and getting to the meat of the central conflict between Heath and Annabelle, and things just went a little wonky. The inevitable blow up occurred a little abruptly and was resolved a little quickly for my taste given the depth of the issues each character has at the time. I appreciated the epilogue quite a bit, though, and the nifty way the book was wrapped up.

From strictly a story perspective, I wouldn't say Match Me If You Can is perfect, but it was solidly good and a lot of pure, fun entertainment. I know it's the sixth book of the Chicago Stars series, but it worked well as a stand alone. I haven't read the first five books, so I can speak with authority (albeit a subjective one) on that. I can also say I enjoyed this one so much that I went back to the beginning and purchased It Had to Be You so I could start the Chicago Stars series from the beginning.

Phillips has a smooth, pleasant writing style and creates likable characters, putting them into sizzling situations (though sometimes that sizzle comes from the hotheadedness of her characters), much to a reader's supreme enjoyment. I'm looking forward to spending much more time in the Chicago Stars world. Similarities exist between this series and Kate Angell's Richmond Rogues series - though that one is centered around baseball. I'll be interested in seeing how those similarities - and differences, too - evidence themselves as I progress with this series. I've enjoyed the Rogues series so far, and things are looking just as good, if not better, in Phillips' Chicago Stars series.

Return from Match Me If You Can to Contemporary Romance Genre