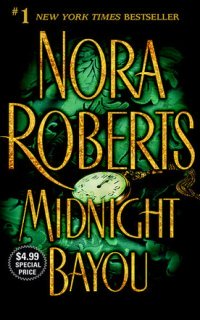 Declan Fitzgerald may have been drunk and reckless when he broke into Manet Hall with his best friend Remy Payne during a trip to New Orleans when he was in college eleven years ago, but he was sober enough to know he wanted that broken down and aging old plantation home as soon as he saw it. He was serious enough about that want - that need - to leave his profession of law and his town of Boston and his family and his ex-fiance to head down to the bayou after buying the house sight unseen in the ensuing eleven years. Compelled in a way he doesn't understand but satisfied to his soul about it, he buys it and intends to fix it, to renovate, modernize a little, but mostly restore it to its once statuesque and stately self. With his own two hands and a lot of sweat. He knows the rumors that Manet Hall is haunted, but he can live with a few ghosts. They're his ghosts now. As Manet Hall is his.

One hundred years ago, however, a vicious, unspeakable crime was committed in that house. A life ended. A love and a family torn asunder. A young woman destroyed. Betrayal compounded by jealousy and callous elitism stirred the sultry, steaming heat of evil and stripped the life from a gentle soul.

Declan is left wondering if he's got ghosts or memories or both as he slowly restores the old plantation house. All he knows is he has no intention of giving up his home...even if that means avoiding a room or two that give him a major case of the willies. He expects it'll all work out eventually. What he didn't expect was to stumble across an utterly delightful female creature one night when he ambled into a bar in the Quarter to meet up with Remy. He also didn't expect the unwavering, instantaneous certainty that he had been waiting for that very woman - and had been looking for her for a very, very long time. That woman, Lena Simone, bar owner and feisty spirit, is just as much his as is Manet Hall.

Convincing her of that, however, may be harder than dealing with petulant ghosts and a centuries-old mystery. No...wait...no 'maybe' about it.

Roberts has dipped deep into the south and flavored Midnight Bayou with the decadent, weighty atmosphere of the sultry Crescent City, doing a particularly excellent job on the cadence in the dialogue of the characters who were raised there. The entire book had such a tremendous depth of culture with a pinch of Cajun spice that it added a gilded patina to a dark, tragic mystery and slightly creepy haunting, elevating the tension and adding desperate hope to the burgeoning relationship between Declan and Lena.

I admit, I'm a total sucker for haunted house stories, so that aspect of the plot in no way disappointed, but I was a little uncertain about the large dichotomy in the tone of the narrative between the century-old atrocity and the lighter, more humorous discourse of the romantic development between the steady and stalwart Declan and his love-hardened Lena. That dichotomy seemed to lessen in some way the significance of the crime and dulled a little of its impact. I thought that was a shame, and by the end of the book I was hoping for a bit more closure and a heck of a lot more justice than I feel was offered.

The characters, though, truly spotlight the book. I loved Declan. I thought he was very well written and fully developed, and even though my personal preference tends towards male leads who have at least one or two flaws to round them out, I found Declan's lack of same to be charming and refreshing. There was just something very solid, dependable, and true about him that I enjoyed...and some dry humor and his ability to laugh at himself sealed the deal for me. I wasn't quite as enamored with Lena, and thought she was a bit too self contained with matters of the heart, too jaded throughout, and a bit too interested in maneuvering Declan and her relationship with him because of it. I wish Roberts had given her more room for the mother/daughter issues that were so vital to her definition. I thoroughly admired her strength, however, and her independence and poise in the face of the paranormal activities. She was a woman who knew her own mind and acted true to it, regardless of the consequences, and that gave her a steel edge wrapped in magnolia-scented appeal.

Roberts' writing style is so fluid and she's got a superb ability to bend the narratives in her books to reflect the locale and the culture of the characters inhabiting them. It lends a feeling of authenticity to each book, and none more so than here in Midnight Bayou. I can't say it was my absolute favorite of her books, but the combination of the horror of the past tragedy and the creepy haunting, along with the strength of the lead character and the mastery of the tone and pace of the bayou country really appealed to me. I was pleased with this very solid read and reminded yet again of why Nora Roberts' career continues to thrive.

Return to top of Midnight Bayou