A Half and Half Read 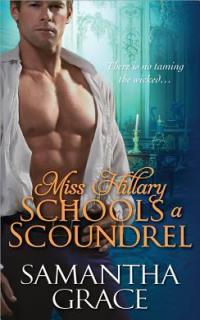 Lord Andrew Forest is a rake and a rogue, a man who revels in his bachelorhood and flees even the mere mention of marriage. He enjoys the female form entirely too much to ever settle for one. And once he gets a gander of the delectable unmentionables of one Miss Lana Hillary, spotted from his position on the ground as she shimmied out of a second story window to evade a persistent suitor, he would heartily enjoy adding her form to his extensive collection.

He's not so much of a blackguard, however, to ruin an innocent, no matter how her quick wit and humorous banter stirs his mind as well as his blood, or how, on each subsequent meeting, she becomes more deeply embedded in his thoughts.

She has already learned a painful lesson when it comes to avoiding men like Lord Andrew Forest. After all, Lana had been engaged to one, and one dissolute rake is enough to last a lifetime. Of course Drew is handsome and charming. And of course he makes her pulse pound. That's a rake's standard. She's smart enough not to give into it. Especially as they hardly travel in the same circles.

Those thoughts comfort Lana until Drew shows up at her friend's country estate, where Lana and her mother had been invited to spend the summer. Forced to fend off her mother's idea of suitable husbands on one front, Drew's avid attention on the other, Lana suddenly finds herself overwhelmed. She's got to stay away from the glorious Lord Andrew or risk losing a piece of her heart as well as her reputation. Lana knows if that were to happen, neither one would ever be repaired.

Drew is at his wits end. He can't stop thinking about Lana. He's lost interest in his comfortable, disreputable life and grown bored with gaming, wenching, and parties. He has to get the chit out of his system and get back to his happy life. If that means a summer with his family and using his younger sister as a co-conspirator, so be it. He'll banish Lana Hillary from his hear...er...mind and be back to himself in no time.

Just as soon as she stops avoiding him, ignoring him, snubbing him, and generally putting him in his place whenever he's around, at least.

It started out so well. I wasn't fond of the scope of Drew's lusty past, but can't fault the authenticity of the lifestyle, and I admired Lana for her independent nature and stalwart determination for more than a loveless marriage mired in infidelity. The chemistry between them frothed and bubbled quite pleasantly every time they locked horns, and while Drew was perhaps a bit typical for the genre, I thought Lana was a lovely breath of fresh air.

She was a virgin, yes, but one whose eyes were open wide to the conflicts between society restrictions and her own willful nature. I quickly grew quite enamored with the girl who wriggled out of a second story window to get away from a man who was bothering her when she thought no one was watching, relied on her big brother to shield her from unwanted attentions when they were, then turned around and gave him what for when he overstepped and tried to corral her life in private.

And okay, it's true, I think there's something endearing about watching a dissolute rogue have his head turned by a woman to such a degree that his life does a complete about-face without him even realizing it. Especially when he keeps having those delicious little inner monologues that so clearly show how delusional he is as he tries to justify his feelings as a passing obsession. They led to so many fun machinations and amusing gyrations as Drew worked to insinuate himself into Lana's life while they were at his family's estate.

Surrounding all that fun and two solid main characters was a healthy number of secondary and ancillary characters who were fleshed out nicely and added depth and complexity both to the storyline and to the main characters' lives. The book had a very full feeling to it in that regard, as it did in the plot while the romance game was afoot.

Then things took a turn around the halfway mark. Though Drew blossomed into a lovely and devoted man...if a bit thickheaded about it sometimes...Lana melted into a wishy-washy neurotic with poor self esteem and a decided lack of intelligence. I got a bit of whiplash from all the angsty, overly emotional back-and-forth she did about Drew.

To make matters worse, the majority of the storyline belabored her indecision and flakiness in that second half. To the point where some of her actions and emotional reactions became tedious and absurd. The only aspect of the story that really attempted to balance that out was an odd plot thread of suspense that didn't make a whole lot of sense and should have been much better woven into the whole of the tale to really have any hope of seeming substantial. It ended up doing little but placing Lana even more firmly into the role of a damsel in distress. Not a favorite role of mine for female leads in romance or any other genre.

I disliked the latter half of the book to such a degree that it almost ruined the whole of the read for me. Only my absolute pleasure and amusement in the first half helped temper my overall impression of the story.

There was enough good in this book to showcase debut author Samantha Grace's easy-to-read writing style and her steady grasp of the historical genre. And there were enough teasers in this one to make me wonder about what is going on between Drew's former lover Lady Amelia and Lana's brother Jake Hillary, who are featured in Grace's sophomore effort, Lady Amelia's Mess and a Half. I just hope that one will provide more than a half of a great read.

Interesting. I've read so many mixed reviews of this book.

Hey, Julia! I'm not sure about other reviewers yet - I try to stay away from reviews of books I know I'm going to read or have read until after I write my review, but given that my own review was so mixed, I can't say that surprises me. I'm looking forward to seeing what some of my favorite reviewers thought about it.

Return from Miss Hillary Schools a Scoundrel to Historical Romance