Just Okay For Me, Sorry 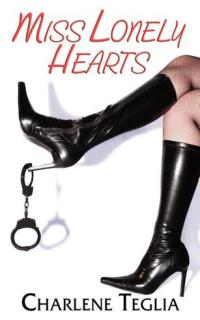 The problem that I had with Miss Lonely Hearts wasn't the plot, really - though it's more than a little predictable and cliched (as is most romantic light comedies to some extent), nor the sex, which was actually a highlight of the book, as it was written with both sizzle and fun, and I love when an author remembers that sex can be fun. No, my primary issue with Miss Lonely Hearts was the fact that I couldn't relate at all to the female lead character, Cassandra, and by the end, I was really tired of hearing how she was so afraid, not only because she has to be married by the time she's 28 thanks to her grandfather's archaic ideology (which Cassandra scoffs at, yet totally buys into), but because time was running out for her to have children and be a good wife. She is 27 years old, about a decade before that thought would really be terrifying!! That really put me off her character, and it was mentioned more than once. Hell, it was a major factor in the driving plot of the story.

Unfortunately, I said that was my primary issue with the book. It wasn't my only one. Another problem I had was the utter lack of depth in the plot or development of the emotional relationship between Cassandra and Jason (again, the sexual relationship was sexy and fun) and the really weird pacing. Everything happened at a snail's pace for the first few chapters of the book, then sped up to a blurry warp speed at the end. The middle was a muddle.

I can't say I liked the book, but I didn't hate it either - I did find Jason rather endearing, and I so wish there had been more flesh to this book, because I really would've liked to have spent more time with him going through the process of realizing that he wasn't being had by Miss Lonely Hearts...and stumbling through trying to change gears at a much more realistic pace to get to his HEA.

And one final issue - I felt the "reveal" of the identity of Miss Lonely Hearts (by that point in the book, I didn't really care who it was) was...odd and a little disconcerting. Bordering on icky. Sorry.

Return from Miss Lonely Hearts to One Good Book Home