New To the Series 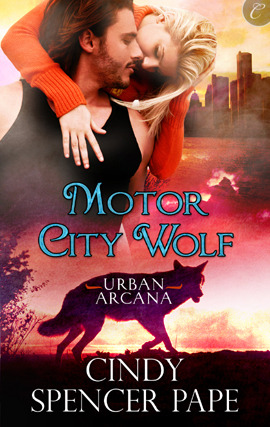 Alpha wolf and bar owner Greg Novak has a problem. A few of them, actually. Someone is killing werewolves in the city, there's a new drug on the streets that's highly addictive to his kind, and his bar has been vandalized, his small pack put in danger. If that isn't enough to keep him occupied, his grandfather, the Prime alpha of the region, wants Greg to settle down, mate, and reproduce as soon as possible, and he intends to force the issue if necessary.

Greg doesn't want to settle down, and the only female he has any interest in lately is Fianna Meadows, a former Fae princess who has been stripped of her abilities and made human, exiled from Underhill, and sentenced to work as a waitress in his bar as punishment for a crime her family committed against the Seelie Court. It goes against his code of honor to give in to his attraction for someone he's supposed to be protecting, but Fee is a tantalizing morsel, and when vandals lock them together in the bar's storeroom basement, her need and his instincts collide with the draw of the full moon, creating an unavoidable conflagration of desire.

Pride, possession, and the urge to protect what he yearns to make his catapult Greg and Fee into the fire, burning away restraint and caution like so much kindling. When the mystery attacker focuses his deadly intent on Fee, Greg realizes that under his protection or not, Fee is his, and he'll destroy anyone who tries to take her from him, be they demon...or wolf.

I still don't much enjoy starting an established series anywhere but at the beginning, but Pape's Motor City Wolf wasn't too hard to slip into. Yes, it's quickly obvious that this isn't a series debut, and there seemed to be well-established series history, backstory, and character definition that I had to scramble to catch up on, but Pape offered enough exposition to get the big picture of the world and mythos fleshed out relatively quickly.

I had a harder time with the characters and with the external plot conflict. I've mentioned in previous reviews that a trend I've noticed in some long-running paranormal romance series has begun to bother me, a trend in which the male and female romantic leads in a book are actually introduced to the reader and to each other in books prior to the one in which they attain their HEA. This book offers an excellent example of one of the drawbacks of that trend.

It's quite obvious that Greg and Fee were characters who have been previously introduced in the series, and their attraction for each other seemed to already be established. If I'd been around since the first book, that may not have been a problem for me, but as this is my first experience with the series, I felt I missed much of the character development and a significant amount of the initial relationship development. While I liked Greg and Fee together, I felt very much like I only read half of their romance story arc, and that was a big problem that got compounded into a worse problem when they got horizontal and groiny so early in the story - a pet peeve of mine in romance books.

The external plot conflict of the demon Nightshade also seemed truncated, like that had been trickling through the previous books, and to a lesser degree, the issues with the assassin Beowulf. Overall, I liked what I read, but it definitely felt like I stepped into the theater well into the feature presentation.

Ignoring that for a minute, there were aspects of the plot I really enjoyed, and I think Pape did a nice job with the horror of the crimes against other werewolves. It wasn't belabored, but it was poignant and painful, and gave emotional impact to that plot thread. I had a good time with the characters, too, and especially enjoyed the surprise I got when I realized that Fee wasn't just a timid damsel in distress. She had moments of insecurity that felt pretty darn organic to her situation, but they were tempered by a steely determination in important places. I loved how she dealt with Greg's grandparents. And I enjoyed secondary character and Greg's cousin Lana, as well as a few other secondary and ancillary characters.

Not everything about the big reveal at the end and the final conflict with the Big Bad was successful for me. I was a little perplexed by the inconsistency in some described werewolf traits. I would've thought, if human ovulation was something easily detected, that the chemical drug smell on several wolves in close quarters would have been just as easily ascertained, but that didn't seem to be the case. A convenience that bothered me. I also thought the fight scene could have been more expansively described and some developments less abrupt.

I can only guess that some crucial aspects of this story would have been more appealing to me had I started the series from the beginning, but I still enjoyed most of what I read. I may not feel compelled to rush back to the beginning and find out what I missed, but now that I've visited with the Detroit werewolves this once, I'd be interested in returning to their city. Not in the winter, though. I'm a Florida girl - I've heard Detroit winters are brutal.