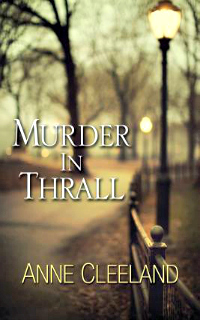 First-year Detective Constable Kathleen Doyle knows she's in a rare spot. Those in her position don't normally get the once-in-a-lifetime opportunity she had drop in her lap the day the titled and much-lauded Chief Inspector Acton personally requested her presence on his high-profile murder case. For the three months they've partnered since then, Doyle has been on tenterhooks, desperate not to screw up what she knows is a fantastic opportunity for her career. Equally desperate not to lose the respect of the stoic and brilliant DCI Acton.

Unfortunately, making a hideous first-year mistake and winding up locked in a tack room by a murder witness while said witness flees their most recent scene isn't quite the way to go about avoiding either, but there it was.

Her error is mortifying, and Doyle is certain Acton's going to toss her back into the quagmire of first-year tedium, no matter how many times she heartily apologizes...and she can't say she'd blame him if he did. The fact that he does no such thing is perplexing, but that's only the beginning of Acton's mind-boggling behavior. And given the doozy of a murder mystery they're having such a hard time sussing out, Doyle is starting to feel overwhelmed by both the case and the man.

As it happens, the complex mystery of a murdered horse trainer and subsequent killings around London turns out to be the least complicated aspect of Doyle's life from the moment Acton, in a highly uncharacteristic move, offers Doyle a completely different sort of lifetime opportunity entirely.

But it's one that may just put them both in the crosshairs of a vicious killer.

Brilliantly conceived and flawlessly executed, this series debut by Cleeland drew me in from the first page and held me captivated to the very last word. I loved almost every single thing about it, especially the phenomenal Kathleen Doyle, who has become perhaps my favorite female lead character in this genre. She is so exquisitely prosaic, a common Irish lass of meager education but fierce determination. Impetuous, occasionally rash, young and ambitious, but also kind and generous of spirit with a gift for sensing truth that serves her well in her job, her personality is a bright beacon shining across every page and was a large part of what hooked me at the start and kept me enthralled.

I just loved her. I loved Acton, too, but I'll get back to him in a minute.

I do want to caution readers expecting a gritty British mystery with this book. That's not the whole of the picture in this case. There is an utterly unique but inescapable romantic thread that more than wends its way through the narrative of this tale, it drives a significant portion of the plot. So much so that I would feel much more comfortable if this were labeled a romantic suspense (albeit an nontraditional one) rather than a mystery. Fortunately I prefer a little romance in everything I read, so the evolving relationship between Doyle and Acton did nothing but elevate the read to near dizzying heights for me and I wouldn't trade a second of it.

In fact, I enjoyed their relationship so much that it sort of overshadowed the actual case Doyle and Acton were working on. It was just so deftly written, so slowly and subtly woven into the lives of her two characters, with such a delicious element of darkness that added a wealth of conflicting emotions, that I couldn't help but remain riveted by it. The endearing relationship (with, okay, some creepy moments) between the charming Irish commoner and her highfalutin DCI Extraordinaire, Lord Acton made me a happy, happy reader.

To be fair to the mystery elements of the plot, the whole book was so well-written that I went back and reread a goodly portion of it when I got through it the first time. Only then did I truly appreciate some of the more subtle intricacies in the writing, and I saw so very many wonderful moments of foreshadow and attention to minute detail that I was literally wowed by the sheer authorial talent it took to pull it all off. So very, very well done.

Now back to Acton. On one hand, he has a very British uppercrust side to him. Stoic and taciturn to the extreme, he practically oozes stiff-upper-lip propriety. But that's just the surface, because underneath all of that he's a cauldron of intensity, and his brilliant detective public persona is just a few steps removed from the nearly pathological interest he has in the fair Kathleen.

He is the epitome of alpha male, but to be frank, not always in the most healthy of ways. In fact, the snippets that start each chapter provide an eerie look at the scope of his interest in her. It was creepy at times, and definitely obsessive, but it was also humanizing and intensely personal, a side of him readers do not see from the Doyle-centric point of view of the narrative. The fact that he freely offers her the truth about his less-than-legal activities before they start any sort of personal relationship, and that it's so clearly rooted in his vulnerability, went a long way to helping keep him out of my too-creepy-to-like category.

Honestly, though, I have an extensive reading history rife with the sort of borderline-disturbing alpha-male shenanigans Acton got up to in this book, so I may have been more accepting of it from the beginning. Readers of paranormal romance in particular (like me) will definitely recognize his type. If Acton had been a werepanther or sprouted fangs around anyone with a paper cut, his behavior would be positively common - even expected.

There really was only one thing about the whole of this book that didn't work for me. In fact, I hated it...at first. There is a massive plot twist that crops up late in the book that more than took me by surprise, it completely poleaxed me. And it made me mad, because up until then, everything had been so flawlessly, carefully written that it seemed grossly out of place and cacophonous against the symphony of preceding developments. It just seemed like such a flagrant abuse of a deus ex machina that I wanted to stomp on my Kindle.

It wasn't until I'd gone back and reread some things, mulled some other things over that I realized that I should have seen it coming. Everything was there to let me know it was coming, in fact. Subtle, and out of context at the time, but with the added vision of hindsight, it really could have been no other way, given what we know of Kathleen as a character, what we learn about Acton, and what is there in some of their dialogue. I still can't say I liked it but could no longer hate it, either. The manner in which it was introduced was just too out-of-left-field for me to really embrace it, but I do have to admire Cleeland for the brilliant way the story built up to that point. The sophistication and intelligence in all the small pieces of information that went into that twist and big reveal were truly spot-on.

Careful and sophisticated, this story was a feast for the brain and a treat for the heart. I didn't think the mystery was as strong as the relationship between the characters, but I didn't need it to be. It was, in short, almost perfect just as it is. I can't wait to spend more time with Doyle and Acton, either, because their story is far, far from over.

Return from Murder in Thrall to Mystery

Return from Murder in Thrall to One Good Book Home