Wish I'd Been In On This Series Sooner 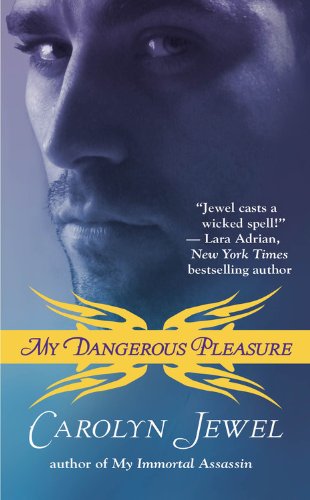 Disclosure: An ARC of this book was provided to me by Grand Central Publishing via NetGalley. This rating, review, and all included thoughts and comments are my own.

Bakery owner and pastry chef Paisley Nichols is used to having little to no social life. After a bad breakup a while ago, she hasn't been all that keen to dip her toes back into the dating waters, and even if she had been, the insanity that is the work schedule of a bakery owner/chef wouldn't give her much wiggle room to do so. Still, one of her regulars had caught her eye, and she was weighing the options of asking the gorgeous man out every time he came into her bakery.

It seemed she'd caught his eye too, and when he stopped by to make a special order one afternoon, Paisley thought her luck in the romance department was changing. He asked her to meet him for coffee. She shook off the oddness of the incident preceding his invitation, when his fingers brushed across her wrist and the electrical shock of the contact stung her skin. Things were looking up if she had a coffee date with such a good looking man.

The positive attitude didn't last long. By evening Paisley was deathly ill and her arm felt like it was going to fall off. She couldn't even make it to her home phone to call for help.

As one of the kin, Iskander was well versed in the feel of magic. When his quiet evening of movie watching and pizza consumption was blown to hell by the shriek of every single one of his magical wards being set off, Iskander went on immediate alert. A quick search of his property led him to the stairs of the apartment he rented out over his garage. The scent of mage magic was like an infected wound against his senses, and the stink drew him up to his tenant's door. Iskander knew his tenant Paisley was human, he wouldn't have rented to her otherwise, but there was no mistaking that a mage was working some freaky magic at her place. With no one answering his knock, and the demon concerned about Paisley's well being, he went in. And found Paisley near death, her body and blood corrupted by a power-hungry mage's ill will.

Saving Paisley may not be as easy as a one time healing, however, and soon it becomes clear to Iskander that the twisted mage who is responsible for the destruction of the relationship between he and his blood-twin has set his sights on Paisley. Iskander lost everything to the mage once, he had no intention of giving up anything else, especially not someone as lovely and unique as Paisley. Even if that means war.

It seems lately I've gotten into a habit of reading books in existing series that I haven't been following. In some cases, that's worked out very well and I'm compelled to go back and read what's come before. In others it hasn't been quite such a good thing, leaving me feeling lost while reading or seriously impacting my enjoyment.

Thanks to a glossary provided at the beginning of the book, I was at least passingly familiar with terminology and was given a very brief glimpse into the sort of world that has been created for Jewel's My Immortal series. That helped prevent me from feeling lost or overwhelmed by unknown backstory and previous development. There were a few things that I didn't understand or wasn't able to grasp the full scope of emotional significance. Subtext and subtlety was pretty much lost on me for the duration. It was sort of like the reading equivalent of having one of my senses go dead. It didn't prevent me from experiencing the book, but it lessened my ability to fully appreciate it.

Keeping that in mind, I was still able to admire the originality of the world Jewel created here, as well as the unique aspects of the mythos and magic driving it all. There were some very nice twists on old standards of demons, witches, and mages that I found appealing, and some compelling contradictions in the nature of the races involved. I'm rather amused by the magekind's intentions to protect humans while amping up their power and extending their life expectancy through ritualistic slaughter of another race. Not that I saw a lot of protection going on, really, but I was comparing the definition of magekind to the actions of what Paisley called screamers. Irony that ironic makes me chuckle.

Stepping beyond the lack of series familiarity to look closely at the plot and characters of this book I felt there were good points and bad. While I enjoyed Iskander and Paisley as individuals, I wasn't all that crazy about them as a couple. It felt more like I was being told they were wicked hot for each other but never actually felt any of that heat. And anyone who knows me or my reviews knows that damsels in distress don't get a lot of sympathy from me (or...well...any). While Paisley spoke big about independence and tried to walk the walk, the fact remains that if everyone around you can kill you with little effort, and you need a bad-ass bodyguard like Iskander to keep you alive, you're a damsel who is either at this moment, or will soon be, in distress. Not to put too fine a point on it, but I didn't have much use for the woman until she managed to do something of worth on the kin's behalf and cut a witch down to size.

That's also probably why I enjoyed the latter part of the book far more than the first part. Once Paisley could contribute, I was much happier, and other aspects of the plot which up until that point had seemed rather meandering and a bit incohesive, started to come together in a far firmer and more palatable manner. I liked Iskander throughout the book, even though I felt there were some minor inconsistencies in his character. I enjoyed the intended contradictions - the killer, the protective male, the frat-boy mentality for life and playboy mentality for women - and thought it was cute how he sort of tumbled into feelings for Paisley.

This book had some good aspects, some bad. I enjoyed the romance for what it was, appreciated the sizzling sexuality, and was utterly confused by the actions and motivations of Iskander's former blood-twin. I felt like I was missing something big time, and not just because the chick was batshit crazy. Kessler's character and plot thread were tied up with her and I had some problems with that, too. I just don't understand why Paisley ended up involved in any of it, actually, or what Kessler was originally after from her given how the story progressed, nor did I feel Kessler's storyline got resolved by the end. That was all very odd to me.

In the end, I think there was more good points than there were bad, and while I'm not a huge Paisley fan, I couldn't help but enjoy her and Iskander together. Some times more than others, but still. I sure wouldn't want to be anyone but Iskander if I was requested to guard/protect/watch Paisley, though. Those sorry sods fell faster than the Red Shirts on Star Trek.

I can't say that I'm feeling particularly compelled to go back to the beginning of the series and find out what I missed after reading My Dangerous Pleasure, but I wouldn't be adverse to doing so either. I would definitely read another book by this author, and I'd continue the series from here, though again, I don't feel terribly compelled to do so. It was a book that I mostly enjoyed while I was reading it, but doubt it'll hold lasting memory for me.

Return to top of My Dangerous Pleasure