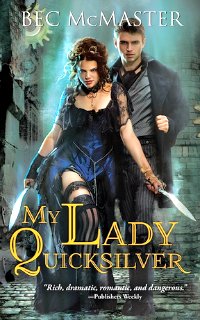 Disclosure:   An ARC of this book was provided to me by Sourcebooks Casablanca publisher Sourcebook via NetGalley.

She is the power behind the mask, the leader of the humanist revolutionary group. To most of them, and to the aristocratic Echelon of blue bloods she is intent on destroying, she is known only as Mercury. Few know her real name or gender. Rosalind prefers it that way.

In fact, she would have kept her gender a closely guarded secret if her late-night smuggling operation hadn't been crashed by the bane of her existence, the Master of the Guild of Nighthawks himself, Sir Jasper Lynch. Unfortunately, Lynch, obviously just as much bloodhound as he is blue blood, gets the drop on her, and it's only that brief moment of surprise when he realizes she's a woman that gives her the opportunity to evade capture.

Lynch still manages to thwart - at least temporarily - Mercury's master plan to wage war on the Echelon, and that, combined with the stress from not knowing if her younger brother is dead or alive after the bombing a few months ago, realigns a few of Rosalind's priorities.

She decides its time to beard the lion in his den. Going undercover as Lynch's secretary is a mad, risky, maybe even foolish move, but she's as determined to find her brother as she is to protect her people. Whether Mercury's passion for the fight against the Echelon will survive the indomitable will and honorable nature of Sir Jasper Lynch, however, is a question that neither the woman, nor the revolutionary, can answer.

I love the world McMaster has created for this series. It's a strong, vivid backdrop that serves each book as a fictional twelfth man. The steampunk elements have had, to date, a presence that trends more towards the subtle end of the spectrum, but that's never been a problem for me. In fact, I've enjoyed the broader emphasis on the unique paranormal elements, though this one did have more of a balance between the two given blue blood Jasper and mech Rosalind as protagonists on opposite sides of their sticky situation.

The two of them were great characters, at their best when they were together. I wasn't thrilled with Lena and Will in the previous book. Lena was too weak and Will too much a martyr for too much page time in that one for me to be satisfied with either of them. There is nothing weak in Rosalind - she's exactly the sort of strong, keenly intelligent, occasionally bull-headed heroine with a heart I prefer for my leading ladies. Lord Jasper, her perfect complement, does have a bit of a self-sacrificing streak, but honestly, he has a damn good reason, one that is driven by his sense of honor, not frustrating (and ill-placed) feelings of unworthiness.

I liked Jasper so much. There was something about him, and about that strict control he maintains over every aspect of his life...a control that Rosalind blows through with delicious speed and ease, much to his consternation, that made him seem so unapproachable yet endearingly vulnerable. It was an appealing blend of humanizing contradictions, foibles and strengths, and a sense of honor in a world that has little respect for the word.

The chemistry he and Rosalind had together was swoon-worthy. Whichever incarnation of Rosalind crossed his path, the physical attraction between them was a conflagration eclipsed only by the brilliance of their sharply-matched wits and traded barbs. They were perfectly suited and I loved them together.

The plot of the story wasn't quite as heavily flavored with Echelon politicking as the previous book, thankfully. There was an interesting - and tragic - murder mystery that Jasper and Rosa were dealing with. It wasn't the focal point of the story, really, there was so much going on that there really wasn't one main plot thread, more several strong storylines woven together to the benefit of the whole. Those story threads were well-defined and highlighted the evolution of both Jasper and Rosa's characters throughout the arc of the story.

Rosalind's evolution was the most impressive element of this one for me. McMaster has a deft hand when creating wounded, troubled, and utterly unique characters, often thrusting them into the most untenable situations. Rosalind was no exception. As Mercury, she's a dangerous, revenge-driven revolutionary. As Rosa, she's a bright, world-wise woman, determined but satisfied with her lot. Her hatred of the Echelon forged her, but her ability to look beyond her prejudices when faced with contradicting evidence defined her and kept her likable.

She was far less noble a character than Jasper for a good portion of the story. That's rare, especially in stories with historical settings. It's usually the male lead who is the dangerous bad boy in romance, but that wasn't exactly the case here and I liked the switch up a lot.

I was a little troubled at the end of the book, though. The climax and resolution to both the external and romantic conflicts weren't as satisfying for me as I had hoped they would be. It got the job done well enough, I suppose, tying up several threads that needed closure, but the manner in which those threads were tied was a bit too reminiscent of the conflict resolutions in the first two books. Nothing so egregious that it felt like I was reading the same ending with different characters, but enough that I felt there was more than vague similarity there.

That bothered me, in large part because everything else about each book has been so fresh, original, and unique, that even the vaguest sense of similarity stood out to me like a flashing sign. Lets just say I'd be quite happy not to come across another Standoff at the Echelon Corral in the next few books in the series.

Frankly, this series is just too good for that sort of issue to crop up and tarnish the read. The world is darkly compelling and sophisticated, the characters as unique as they are dangerous, and their stories a complex tapestry of grim threat, fragile hope, and steely determination. I'm a big fan. I want to be able to continue to be for a long time coming.

Return from My Lady Quicksilver to Steampunk

Return from My Lady Quicksilver to One Good Book Home