Just Okay For Me 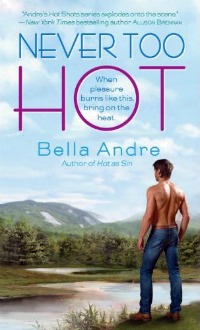 Two years ago hotshot firefighter Connor MacKenzie was horribly scarred by a fire that he couldn't outrun. Now he's returned to his grandparents' log cabin in the Adirondacks to fix it up and bring it up to code while he waits to hear the news on his final appeal to get back to his Hotshot crew. Fighting fires is everything that means anything to him, and the work at the cabin will also help him get back into prime physical shape so he won't miss any time when he gets the okay to go back to Tahoe.

Connor comes face to face with the first problem with his plan when he finds one Ginger Sinclair painting on the porch of the cabin. The beautiful divorcee has a year lease and has spent eight months of that lease exploring herself, growing into her skin, and learning to stand on her own two feet after a bad marriage and a difficult childhood robbed her so much of her identity and self confidence. When Connor shows up, her new-found inner strength goads her into standing her ground and she refuses to back down from the surly but scarred man.

It's Ginger's ability to see the man, not just the scars, that reaches out to the dark spots in Connor's psyche and soothes him in ways he wasn't expecting, and her willingness to open her heart to him moves him in ways he dared not dream. But when Connor's life is once again rocked by tragedy and he has to face a truth that leaves him shaken, Ginger's heart may be all that keeps him from losing himself completely.

This contemporary romance by Andre is well written with a smooth narrative and conversational dialogue, and while not terribly original or groundbreaking, the plot is nicely layered with a secondary romance subplot and additional threads of a troubled teen and some family angst. Connor and Ginger were realistic main characters, their issues sympathetic and realistic, and their relationship emotional and touching.

Yet despite those strong positives and the fact that there's nothing bad about yummy firefighters, I had some issues with the book, though most had nothing to do with critical aspects of the story itself. Instead, there were several points of the story that weren't to my personal taste in contemporary romance novels.

I tend to favor romance that introduces the characters and draws out the development of their romantic relationship, building towards a satisfying conclusion. In Connor and Ginger's case, they fell into bed a little too precipitously and were heavily emotionally involved before they really got much of a chance to know one another.

I also have a huge issue with the irresponsibility of unprotected sex. I don't find it at all sexy or romantic, actually, when two people get swept away and play the "of course I'm clean/safe" game afterwards. First, it seems contrived when coupled with pregnancy as a plot thread, and second, it's always struck me as more disrespectful to a sexual partner than in any way romantic. And to have unprotected sex be more the norm than protected sex for whatever reason just pulls me right out of the story and starts icking me out.

In relation to the story, I found the romance history between Isabel and Andrew more distracting than beneficial as a subplot, and when Andrew showed up, their relationship became pretty predictable. I would have preferred more page time given to the character and romantic development of Ginger and Connor's relationship instead. Along with the other plot threads, that would have been more appealing to me as a whole.

I did like Ginger and Connor together, and I thought the issues Connor had with his scars and the way Ginger dealt with them were some of the stronger and more appealing points of the story. There was plenty of depth inherent in those issues. I would have enjoyed seeing those facets expanded. By the end, though, the combination of the rather pedestrian plot and the issues that crossed my lines in my reading preferences lessened my overall enjoyment of the read.

Return from Never Too Hot to Contemporary Romance Genre

Return from Never Too Hot to OGBDA Book Review Home