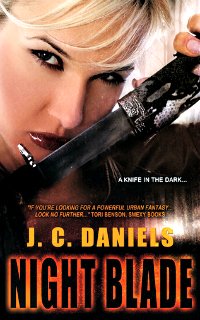 Disclosure:   An ARC of this book was provided to me by the publisher via NetGalley.

Half-human and half...not, investigator, courier, assassin, and general jack-of-all-trades Kit Colbana is probably the happiest she's been in her life. She's got the Alpha of the cat clan as her lover, enough steady jobs to keep her occupied and paid, and she hasn't had to kill anyone lately. That's about as good as it's ever been for a woman who is still haunted by the vicious nightmare that was her childhood.

She really should've known the happiness wasn't going to last.

When she's approached by Banner cop and ex-lover Justin with a case Kit can't refuse, she is furious. And frantic. Someone has been killing council members of the Assembly of Non-Humans and all evidence is pointing to cat clan Alpha and her main squeeze, Damon. If Kit can't clear his name, or provide evidence that the kills are legally justified, Banner will put out a kill order on him and Damon will be executed. In days.

To make matters just that much worse, Justin, one of the most powerful witches in the country, puts a binding spell on her so she can't talk about the case with anyone, including the one man she would give anything - including her own life - to save. She can't ask for help, she can't warn anyone what she's doing. She's completely on her own.

And her life may very well be exactly the price she ends up paying after all.

If Daniels (aka Shiloh Walker) intended to write a book that would rip the bloody and still-beating hearts out of her readers' chests, then grind them into weakly throbbing pulp under the crushing weight of a titanium-soled heel, then she overachieved the hell out of that goal in the last quarter of this book. Wow. Talk about some viscerally devastating reading. It was an incredibly dark, powerful, gut-wrenching conclusion that is going to make me scurry off to find some light fluff for my next read.

I can do nothing but heartily admire any author who can put my emotions right where he or she wants them to be, and Daniels did exactly that. It wasn't fun, it wasn't even something I'd consider entertaining, but it was very well done. For that portion of the book alone, I liked this read.

The rest of Kit's story in this book, though, wasn't quite up to that level.

I like Kit as a heroine. She's tough but deeply damaged, she kicks ass but she's still haunted by her past. She's never warm and fuzzy and a bit too often she takes the smart-ass route when diplomacy could net her less damage. She's unapologetic and sometimes she's terrified, but she does the job anyway. I like her a lot.

I just wish she was given more to do in this book then race around getting chewed up and spit out, then painfully healed, only to turn around and do it all over again. Unfortunately, as soon as the main arc of the plot started to really get going, it felt like that was the majority of what I was reading. Toss in some nightmares about the grandmother from hell and you have 90% of the first three quarters of the book.

The other ten was time with Damon, and I have no issue at all with that beyond the fervent desire for it to be a larger percentage.

Even when Kit's frantic race to work the case had her following leads or questioning witnesses, we didn't really see her do much of that. Too often we were brought in after the fact, when things had gone balls up and Kit was getting chomped. I found it all a little odd, and the focus seemed to remain on Kit's thoughts and the panic she was feeling to get this job successfully completed more than on the steps she took to complete it.

Well, that and the sometimes repetitive internal monologue, which was too often stuck on the alternating thoughts of how much stronger/faster/better she is than anyone ever guesses, and how her grandmother's torture shaped her. And not for nothing, but there sure seemed to be a lot of ringing phones in the story.

The final quarter of this book was emotionally devastating. Reading it was incredibly painful, but I literally could not tear my eyes away. In part because I like Kit as much as I do, and love Damon fiercely, I was just emotionally wiped out at the end. Wiped out and cursing the long wait to the release of the next book in the series. Had the rest of the story arc at least held its own against that, this would have probably been one of the best books I've read all year, and one of the best urban fantasies I've read in a long time. It didn't do that, but it was still a worthwhile read.

Not fun, by any means. But deeply affecting. 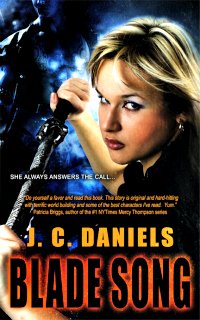 Return from Night Blade to One Good Book Home