Night of the Huntress 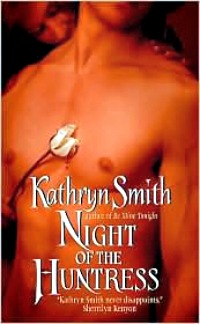 After having given up on historical romances quite a few years ago for various reasons, I'm almost reluctant to admit that a few very pleasurable reads in the historical paranormal romance/fantasy genres have dragged me back into the fold of late, despite myself. The blame lands partial on Kathryn Smith's shoulders, as her Brotherhood of Blood series is one of those responsible for my return. I found Night of the Huntress, the second book in this series, to be even better than the first, with more a far more enjoyable female lead, the Huntress Marika Korzha than the one in Be Mine Tonight, Prudence Ryland, who I found to be a bit too whiney and too much a lady of her age. Perhaps that's why I enjoyed Marika so much more, actually, for although the series is set just before the turn of the 19th century, Marika is a woman far ahead of her time. She's a dhampyr - half human, half vampire - and on a mission to hunt vampires and track down the murderous monster responsible for her mother's death, the elusive Saint. The job offer to track and catch his longtime friend and brother in blood, Bishop, comes at a fortuitous time, and she takes the job...then manages to capture the vampire...but before turning him over to the people who hired her, she's got to get whatever information Bishop has about Saint's whereabouts from him. As Bishop is more than reluctant to betray a friend, she'll do whatever necessary to...convince him - after all, he's a bloodthirsty killer. A vicious murdering monster. A soulless fiend.

That question starts to torment her as a lifetime of prejudice smacks up against six centuries of strength and honor, and Bishop starts to get under her skin before worming his way into his heart. Unfortunately, when you're blind to the prejudice of monsters in vampire form, you miss the machinations of monsters far more humanly cloaked. Marika and Bishop become hunted by the very people who originally hired her, and the conspiracy goes far deeper and is far more wide spread than either are aware. It'll take both of them - their strength and intelligence - just to keep themselves alive.

Night of the Huntress is cleverly plotted and after a bit of a slow start, where Marika's clinging to prejudice and spouting groundless vitriol started to wear on me, it really took off nicely. The development of the relationship between Bishop and Marika was well done and the depth of each character surprisingly nuanced and realistic. There's a wealth of subtly spectacular world building in this series, because not only does the author have to write a convincing paranormal romance, but she has to blend in realistic historical cultural issues relevant to the time to really make the plot work - and she does so quite deftly. The deepening conspiracy and danger of the group out to bring down the Brotherhood of Blood is also well told, and manages to threaten and entice without overwhelming the romantic aspects. Very nicely balanced. This book and this series will be a huge hit for fans of historical and paranormal romance genres and even for those not so fond of historical romances...if they're fans enough of contemporary paranormal romance, this book in particular and the series as a whole is well worth your time (trust me, I'm one of you).

Return from Night of the Huntress to Historical Romance Genre

Return from Night of the Huntress to OGBDA Book Reviews Home