A Brilliant World ~ A Groundbreaking Series 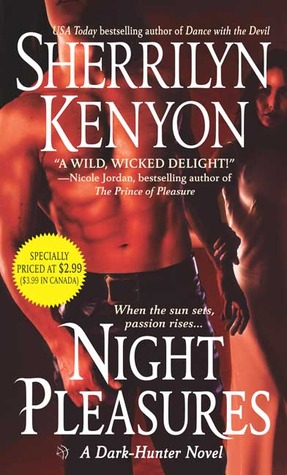 Once upon a time there was a girl who was just getting interested in paranormal romance, pulled into an ever-widening stream of fans courtesy of Christine Feehan's Carpathians series. Feehan led that girl in many directions, not the least of which was Sherrilyn Kenyon's Dark-Hunter series. That girl became a fan. Then, as occasionally happens with series that go on for many years, other books drew that girl away as she followed the streams of paranormal romance to the ocean of the larger genre of fantasy and all its sub-genre incarnations. Much like any migratory creature, however, this girl eventually found herself swimming back to her old Kenyon stream and for old times sake she figured she'd enjoy refreshing her memory of the series that, with the help of one or two others, opened her eyes to so many reading doors.

Night Pleasures is now considered the second book in Kenyon's Dark-Hunter novels, but when I originally read it about eight years ago, it was the first, and Fantasy Lover, the story of Julian of Macedon, was considered a sort of precursor, as that book introduced the world, but not the Dark-Hunters themselves. That's different now, and Night Pleasures is listed as the second in the series. It will always be the first in my mind, and it is a gem of a book for the sheer artistry of world building and creativity of mythos.

Opening the pages is like stepping through the looking glass into a fully formed alternate universe that is so vibrant and alive that it literally took my breath away when I first started reading it. Up to that point, I had rarely been as captivated and involved in a world, and can remember how impressed I was with the concepts and ideas behind this very dramatically different and unique take on vampires. In this world Apollites are cursed by the Greek god Apollo to die a horrible death at the age of 27 for reasons that are ripe with Greek pathos. If they want to survive beyond that...and they have no conscience...they turn Daimon, a creature that survives by stealing human souls. Hunting these aberrations are a legion of Dark-Hunters who have been gifted...and cursed...with the animalistic and predatory enhancements that the Daimons have. They are warriors of the Goddess Artemis, and she is a cold and cruel task master. Just ask Acheron Parthenopeus, the first Dark-Hunter and the leader, in a manner of speaking, of the rest.

And so begins the journey of Kyrian of Thrace, Greek prince, warrior, commander of armies...and damned by an act of treachery so heinous that it still haunts him two thousand years after he'd been tortured to death by the Roman Valerius and had called on Artemis for vengeance. His plea was granted and he took up the mantle of Dark-Hunter and now, in current day New Orleans (pre-Kristina), he hunts the steamy streets in an effort to keep the human race safe from beings more deadly than they can imagine.

He'd been on the job in the Big Easy for the past one hundred years, until he woke up one night handcuffed to a human woman, Samantha Devereux, after being captured by the very powerful Daimon Desiderius. Desidisasterous has offed several Dark-Hunters in his time, and now he's out to destroy Kyrian. And he's got some nefarious plans for the delectable Samantha, as well. Kyrian and Sam will have to work together, as Desiderius has upped the stakes on the Daimon/Dark-Hunter war, and unless Kyrian and Sam can find a way to stop him, the city of New Orleans will fall and human blood will run through the streets of that old party town.

The history and mythos of Night Pleasures and the introduction of the world of the Dark-Hunters is the most captivating aspect of Kenyon's book, though the romance between Kyrian and Sam is well handled. The pacing is quick, but there's a lot going on with the plot and sometimes it gets a little muddy and confusing. Like any good first book (or second, I suppose) in a long series, there's a lot of information that's just alluded to, and there's certainly a sense that there is a lot yet to come.

There are a couple of things that I consider to be flaws in relation to the conflict of the plot, however. There was never a point in Night Pleasures where I didn't feel that Kyrian's personal demons far outweighed the Daimons as the true threat to the story. Desiderius was just not all that impressive as a villain, and considering his history and backstory, he probably should have been. Unfortunately the disdain that Kyrian held him in made him seem more like a joke than a threat, so the final few chapters that dealt with that conflict with Desi-do-no-right ended up feeling more annoying than threatening. Samantha's triumphs made up for that to a degree, but there was still a lot of unaddressed issues that could have been more interesting than the Desiderious crisis.

The only other major complaint I have is one that prevails through the series. Most Dark-Hunters are ancient. Several hundred years under their belts. Kyrian in particular has been a Dark-Hunter for two millennium. You'd think that these strong, solitary warriors could put on their big girl panties at some point between their tragic deaths and modern times and get over the treachery that caused them to turn Dark-Hunter, or maybe...I don't know...have a more realistic recall of historically ancient past events, given the lives they lead and the capacities of the brain. Their emotional wounds and trauma haunt them, and in many cases cripple them. In Kyrian's case, it was a weakness on more than one front. I just could never quite buy that aspect of his personality. Personally, I find it more heroic to triumph over past scars, no matter how heinous, and gain victory in living well, and 2,000 years is certainly more than enough time to blunt some of those edges. As a result, Kyrian in particular, but all Dark-Hunters in general sort of strike me as being a little too self-involved. Sure, not everyone has been betrayed by the only woman they every loved and tortured for months before being crucified, but come on, life's tough all over, man's inhumanity to man knows no bounds, and it was two thousand years ago! Get over it already. Or...you know...just have one night of really good sex, then all will be fine. It was for Kyrian, anyway.

And that, I'm sad to say, is what kept Night Pleasures from being a five star read, even with the stupendous world building, mythos, and utter originality.