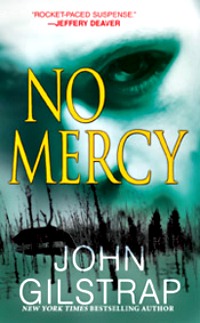 Once an elite military warrior, Jonathan 'Digger' Grave now runs a specialized private investigations firm - but that's more like his front job. What Digger truly specializes and excels in is retrieval...of the human variety. He works under the cover of anonymity with a team of brilliant and devoted friends and associates whenever someone somewhere needs to be freed. In No Mercy he's hired to save a kidnapped college student, but the job goes hot and ends with the death of the kidnappers. He saves the kid, but not before events are set into motion that risk more than he'd ever imagined and threaten everything in his life he holds dear.

As this is my first John Gilstrap novel, I can't think of anything more significant to say than after reading No Mercy it definitely won't be the last. This thriller was extremely well written and plotted with such delicacy and artistry that I was utterly captivated from the first page. The characters are given a depth and sense of presence on the page that make them truly stand out and force you to care about them and their plight. I was particularly impressed with the subtle flaws in Grave's character - flaws he understands and even admits to, but doesn't necessarily try to correct. He's a unique and fascinating character and the true driving force behind this book. You get the sense that he does what he does not just because he's good at it, but because at his core he's got a very firm belief in a black and white picture of right and wrong, while understanding himself well enough to know he thrives in the grayest of areas. As his psyche treads the line of darkness, he holds up a saving beacon in one hand for those who are lost, and keeps a .45 clutched tight in the other to destroy those turning off the lights. He's a chameleon in life, and only his closest friends and associates are privy to his secrets, but even they are kept at arms length when loss and pain are visited upon him. He is the perfect hero. He's also sort of an egotistical jerk - but in a mostly likable way, really. Certainly in a very believable one.

While Grave is the driving force, the book is also populated by quirky and at times humorous secondary and ancillary characters. I loved Gail and thought she was the perfect foil for Grave. I was very taken by her strength, intelligence, and integrity throughout the book, even when forced into positions that would compromise the character of others. The split narrative that allowed for the reader to see Grave's and Gail's worlds slowly starting to collide was very well done and while it could have dragged the plot down had either of those threads been less powerful, it did quite the opposite, lending a feeling of inevitability and rising tension to the less critical aspects of the story that I found more intriguing than those that were supposed to be the most critical aspects.

In this case, that was actually both a boon and a slight disadvantage. For all that I enjoyed No Mercy, there were a couple of small aspects that kept it from being a total five star read for me. I didn't think the antagonist had as much of a presence in the story - even in the parts of the final conflict - as I would have preferred. Part of that was simply the nature of the story, but because there were some pretty horrendous crimes committed in this book, I would have preferred the narrative to have brought forth more from the person responsible so that the resolution would have had a bit more of a victorious impact. As it's written, the individual is more a shadow behind corporate greed, the deadly weapon of corporate avarice and brutality in human form, and I don't find corporate greed as compelling. I'm not criticizing the book for this. It's an excellent, slick, polished novel that was extremely entertaining. I'm merely expressing that my reading preferences lie more towards a closer personal conflict.

There was only one moment that just didn't quite work for me given the nature of the character involved, when a security gaffe happened that pointed the bad guys in the good guys' direction. It seemed extremely out of character and implausible, all things considered, and it pulled me right out of the story. That's not very clear, I know, but it's nearly impossible to explain further without providing spoilers, and I'm loathe to do so. And yes, there's some other stuff that's implausible if not downright unlikely, I know that, but honestly, the wizard kept the story moving and the action was intense enough that I didn't stop to look at the man behind the curtain. Action movies are pretty implausible, too, but I'm still a Die Hard fan.

Suffice it to say that No Mercy was as close to a five star read as it could get without actually being one, and I look forward to getting a crack at my next John Gilstrap novel, especially any that feature these characters I've had the chance to know and like.

Return from No Mercy to Genres

Return from No Mercy to OGBDA Book Reviews Home