by Tiffany A. Snow 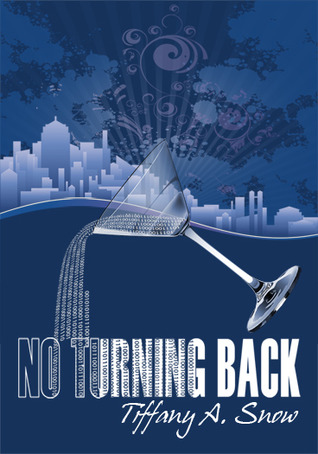 Updated 4/4/2012:   Author Tiffany A. Snow has secured my permission to use parts of this review in promotional and/or informational capacity including but not limited to the book's synopsis blurb both on the book and at various online retailers.

Kathleen Turner has goals. She moved to Indianapolis to start seeing to them, but things aren't going quite as well as she'd hoped. She's a runner for a high-powered law firm in town, not the most prestigious of positions, but it and her part-time bartender gig at least pays the bills. And one of the senior partners is a dreamboat in that obscenely rich, disturbingly good looking, slightly snobbish sort of way.

Before she did a mortifying face plant in his lap during a meeting, she was quite happy ogling him from afar. After that...well...she was more about the avoiding. And hiding under her desk/in her car/etc. when she catches sight of him. Mature, no. More likely to assure she keeps her job, yes.

She's made some friends in the few months she's been in Indy. One of those friends is her neighbor Sheila. Kathleen can't say she's completely comfortable with Sheila's job choice as a high-dollar escort, but she's grown very fond of the woman.

It's the middle of the night when Kathleen is ripped out of a comfortable sleep at the sound of a loud fight coming from Sheila's apartment. As disturbing as that is, it's the ominous sound of silence afterwards that raises the hair on Kathleen's arms and prevents her from falling back to sleep. Slipping from bed with the intention of making sure everything is okay, Kathleen makes it all the way across to her friend's door and knocks.

The door swinging open under her knock is first sign that something isn't right. Sheila's blood-soaked, throat-slashed body, laid out in her bedroom on sheets still dripping viscous fluid, is the clincher.

Shock and horror are followed quickly by gritty determination when it becomes clear that Sheila's death isn't random, and it isn't the result of a jealous boyfriend. It's the opening gambit in a web of murder, deceit, conspiracy, and fraud that stretches to the law firm for which Kathleen works. Maybe to the very office that Blane Kirk, gorgeous, rich, slightly snobbish Blane Kirk, commands.

And Kathleen Turner, law office runner, may have just become the next target.

Wow. Okay. This is one hell of a book. The plot is chock full of twists and turns, diabolical in its direction and misdirection, confounding in its conspiracies and conflicts. And it's a whole lotta story crammed into all those pages.

The most confounding aspect of all is how much I thoroughly enjoyed the read, despite several elements that are usually big time deal breakers for me. Some of those are nothing more than personal reading preferences, others are the more significant story elements that severely impacted my willing suspension of disbelief.

All of them added up should have made this book a fail for me. It didn't.

I have no fondness for love triangles, and the one hinted at here was a big problem for me. I am even less enamored of heroines who have every guy in the book panting after them. Especially in this book, where it is established early by Kathleen herself that men like Blane "didn't give me the time of day." All evidence to the contrary on that one, as almost every character with a penis wanted Kathleen. Even the ones who wanted her dead afterwards.

I'm also not a fan of inconsistent characters, I loathe blatant stupidity, and emotional retardation is a close second on the hate-o-meter. Kathleen hits on all those traits more than once.

As the daughter of a cop who purportedly raised Kathleen with a respect for the law (until he died when she was fifteen), she showed a disturbing lack of faith in law enforcement on more than one occasion. On the other hand, the elements of police procedure, thankfully few and brief, were so unrealistic that I couldn't really blame her for that one. The justification for her involvement - that Kathleen knows how overworked and short staffed the police force is, so keeping vital information from them, solving two homicides, and uncovering a massive conspiracy on her own is the better option - is, I'm sorry to say, ludicrous. Kathleen has an unrealistic, over-inflated sense of responsibility to solve the murders of a casual friend and a mere acquaintance. Oh, and it's just bizarre that the mere acquaintance turns to Kathleen for help and hands over vitally sensitive information to her as if she were his last hope (in a very Pelican Brief moment).

She's a law office runner...and a bartender. Part-time. She's a girl from nowhere Indiana who has been in the big city for a handful of months. She's led a sheltered life to date. It just doesn't make sense that she'd be in the positions she gets herself into in this book. And making sense is a big deal for me. Or it always has been, before this book.

This book that broke my brain a little, but wouldn't let me dislike it. The book that, despite everything, was so carefully plotted and ingeniously crafted that I was swept up right along with the nearly criminally incompetent Kathleen. I loved this book. I should've hated it and I loved it. I loved Kathleen. She may not have made sense in the role, but she was gawky, idiotic at times, obstinate, plucky, and dedicated. Daring in the face of danger, timid in the shadow of affection, she didn't trust wisely, she trusted too easily, she was fickle, she was loyal. She was a mess and she got the job done.

I loved her, and more than once I wanted to kill her myself. She was a delightful, frustrating, enchanting, and infuriating contradiction.

The bad boys of crime and punishment, Blane and Kade, were...well...they were something. I was more than a little in awe of how, with such a deft and seemingly effortless hand, Snow kept these two shady characters cloaked in mystery, their motives murky, their intentions unclear. They are such complex, complicated, cunning characters and knowing them brings such fascinating twists and turns and ups and downs. I loved them, too.

The plot-driven aspects of the story were brilliantly executed and richly vibrant with danger, suspense, conspiracy, murder, and mayhem. The narrative was smoothly sophisticated, polished and intelligent. It's no secret that independently published books are hit-and-miss in that regard. This one is a hit. Characters were very well developed and three dimensional, and descriptions were vivid and easy to visualize. There were moments of humor that made me chuckle out loud, tense scenes that had me on the edge of my seat, and disturbing events that pissed me off on the characters' behalf.

This book has driven me a little nuts, actually. I can't help but know - know deep down - that I shouldn't like it. From every other book I've read and all my experience viewing and identifying critical book issues, I should not like this book. Yet I did. I more than liked it. I couldn't put it down. Usually, when the good parts of a book outweigh the less positive points, the blend of both balances out my overall opinion of the read. Not so in this case. No, in this case, the good parts were so darn good, the plot so well done, the characters and their relationships so appealing, that all the less positive and downright confounding parts just didn't matter at all. Damn it.

No Turning Back is a fantastic adventure, and I, for one, can't wait to see what comes next from Tiffany A. Snow. Even if it, too, frustrates me almost as much as it delights me.

Books by Tiffany A. Snow

Return from No Turning Back to Romantic Suspense Genre

Return from No Turning Back to OGBDA Book Reviews Home