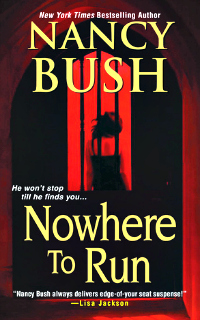 Disclosure:   An ARC of this book was provided to me by Zebra publisher Kensington Publishing Corp. via NetGalley.

Little Livvie Dugan remembers a lot about her sixth birthday. She remembers blowing out the birthday candles on the cake her mama got for her. She remembers opening presents, and getting to watch lots of cartoons. She remembers falling asleep in the den with the television on. It was a great day...until she woke up and went into the kitchen for another piece of cake. That's when little Livvie remembers finding her mama hanging by her neck, her face all purple and puffy and her tongue lolling from her mouth.

Livvie doesn't remember much of anything else for a long time after that.

Twenty years later, Olivia Dugan still bears the scars from her childhood, scars that no amount of therapy can erase. They've shaped her into a quiet, reserved woman who stays off the grid, and haunted her with nightmares and a lingering sense of being stalked. Still, she's getting by, until she gets a package from her mother, a package sent two decades after she committed suicide. A package that begs far more questions than it answers and opens far more wounds than it heals.

And when Liv slips out of work one afternoon to pick up a quick bite of lunch and comes back to a bloodbath of mind-shattering proportions, she is terrified that the package from a woman long dead has put her in the crosshairs of a killer. And maybe there is even more to little Livvie's memories of a horrific night twenty years ago than she's let herself remember.

As a twisted, complex, disturbing psychological thriller, this book hits all the right notes for me. The heroine, Liv Dugan, is one of the most damaged and broken characters I've read lately, and as odd as this makes me, I loved that about her. Well, maybe it would be more accurate to say I appreciated it, because she was a quintessential product of a truly traumatic childhood. In short, she was believable in her role, and her manic paranoia and edge-of-sanity actions set the tone of the frenetic race to identify and stop the monster terrorizing her.

There is a lot going on in this book. The timeline is a bit jerky and there are a lot of different characters to keep track of, so some parts were a little hard for me to follow in places. I can't say I totally bought into the introduction of Auggie, either. His behavior wasn't exactly what I'd call professional and his connection to September strained my willing suspension of disbelief. Overall, though, this is a layered, grim, freaky thriller that kept me riveted from cover to cover. And the reveal of the Bad Guy completely blew me away. I did not see that one coming at all.

As out of left field as it was, it completely worked, and all those niggling little bits of seemingly random story detritus so carefully doled out from the very beginning coalesced into a horrifyingly shocking snapshot of insidious evil by the end. Disturbing, maybe, also effective and intelligently done.

I wish this hadn't been labeled as a romantic suspense, though. For all that Liv was a great main character, and her damage made her realistic and believable, I don't think it made her a great romantic heroine. She was just a little too broken for me to really engage with her in a romantic role. I liked Auggie quite a lot, and I liked them working together, but I kept wishing she wasn't quite as unbalanced as she was, or that the relationship between them had evolved a little differently. I just couldn't get a grasp on them as a couple, not for where Liv was when their relationship started, anyway.

It was the biggest stumbling block of the read for me, and that, along with some of the stylistic elements that tripped me up here and there throughout the story, kept this from being a solid win for me as a romantic suspense. That doesn't diminish my frank appreciation and admiration of the book as a taut, seat-of-your-pants, gut-kicking psychological thriller. In that regard, it's one of the better ones I've read recently, and one I think fans of the genre would enjoy.

Return from Nowhere to Run to Romantic Suspense

Return from Nowhere to Run to One Good Book Home