Painful as a Bus Crash 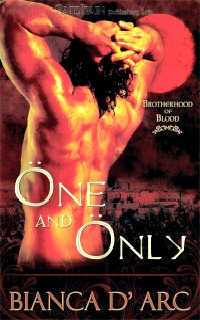 Atticus has walked the earth for a millennium and for so long he has searched for his One, the one woman in all the world meant to be his other half. Now, after having resigned himself to not finding her, after debating the final sleep and turning further and further away from existence, he steps on a girls toes and his entire world changes.

Lissa was feeling apprehensive about taking the shuttle bus up the mountain, but she got on anyway. Slightly psychic, she's feeling very uneasy until she sees a man who literally robs her of breath and makes her heart race. Suddenly those psychic warnings are blaring conflicting messages and when he trods on her toes and looks into her eyes, Lissa knows she'll remember that fantastic stranger for the rest of her days.

It's not the premise to this short novella that I have a problem with. It's perhaps not the most original of stories, but it has a bunch of sexy male vampires in it, and that's pretty much all I need to enjoy a short story like this. Unfortunately, it was just about every other aspect of the story that made me wince.

I think D'Arc had some sizzling sex scenes in the book that are deliciously graphic and temperature raising, but that's where the good points end. The dialogue is so unbelievable, so cliched and trite and way beyond soap opera-ish that it actually hurt to read some of it. I totally don't get it. I've read D'Arc before and didn't have that problem with the book, but this one was quite literally painful.

The development (and I use the term loosely) of the relationship between Atticus and Lissa was nearly comical in its speed and lack of anything resembling realism, and the 'conflict' of the story arc was...just bizarre. If that wasn't bad enough, it ends with a cliffhanger, and I have a huge issue with cliffhangers. They're in my top three of reading anathemas. At this point not even a life threatening cliffhanger could prompt me to continue with this series, though I did like the interaction between Atticus' friend Marc and Lissa's friend Kelly. I just don't know if I would risk dialogue as horrible as it was here.

Return from One and Only to Paranormal Romance Genre

Return from One and Only to OGBDA Book Reviews Home