One Night in London

And a Lovely Night It Is 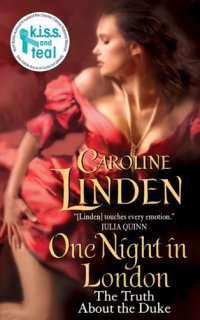 Series: The Truth About the Duke, Book 1

Disclosure: An ARC of this book was provided to me by Avon Books publisher HarperCollins via NetGalley. This rating, review, and all included thoughts and comments are my own.

The Duke of Durham is dead but his secret didn't have the good grace to die with him. Both the nature of the secret and the unknown identity of the person blackmailing him because of it made it necessary he burden his three sons with a horrible truth, but with only two of the three to bear witness as his time grew ever-shorter, he had only the time to apologize to his middle and youngest sons before he slipped into senseless ramblings, then a quiet death.

It was his solicitor who was left with the untenable duty of informing the stalwart middle son Edward and his younger brother Gerard just what their father was begging forgiveness for. And the secret is horrible. Their mother had not, as they had always thought, been their father's first and only wife. In truth and long ago he had married a young woman on a whim, a youthful folly really. That folly was quickly realized and they parted...but did nothing to dissolve their union. The horrible, terrible, scandalous truth is that the Duke of Durham may, in fact, have been a bigamist, his sons illegitimate and ineligible for their father's fortune and title.

Edward knew the responsibility to investigate and clear up this matter would fall mostly on his shoulders. His elder brother never addressed a problem that couldn't be solved by either bedding women or drinking to excess, and his younger solved all his problems with a mind on fighting and warfare. It was up to Edward to find a solicitor who would champion their cause and do it discreetly.

No sooner had Lady Francesca Gordon finally found a solicitor willing to take on the custody case for her niece than that solicitor was called away and his assistant was suddenly feeding her a line that he was no longer available. Incensed and more than a little frantic, she followed the solicitor to his newest and obviously more important client to give him or her a piece of her mind. Only slightly disturbed by the realization that it was the Duke's residence her wayward solicitor had raced to, she let her fury and her fear bolster her into a confrontation with a mirthless lump of a man over the theft of her last hope.

Though the confrontation went no better than she expected, Lady Francesca read the scandal rags the next day and realized why her solicitor was pulled away with such alacrity. When she realized that she might be just the woman the stiff and solemn Edward de Lacey needed to smooth the jagged edges of a vicious scandal, she felt hope that just maybe a trade would set things to right.

Francesca couldn't possibly have dreamed that the longer she spent with Edward the more irresistible he would become. Or that no one but her niece could ever come close to being more dear. Regardless of the consequences of class, standing, or scandal.

I love when a historical romance both feels authentic and features a unique and strong female lead. Linden did a great job of it here. Part of Francesca's ability to maintain her independence comes from her being a widow and of lower social class than Edward, but regardless of the reason, I was happy with the result. In fact, there were several things that made me very happy about this charming book.

It's one of the rare instances that I felt fonder of the female lead than the male. There's nothing at all wrong with Edward by any means, I liked him just fine, but Francesca was a feisty, passionate woman who knew how to take care of herself and see to her own needs. Smart, quirky, manipulative when necessary, kind, and hot-tempered if provoked, she also lived a life that pleased her just fine, doing what she wanted when she wanted. She was a conflagration that Edward...steady, staid, dependable Edward...desperately needed.

Together they made a charming, likable couple and their relationship made it worth the slow start of the plot and my inconsistent interest in the custody issues and the Duke's scandal. For that wavering interest, I still thoroughly appreciated this book for some unexpected and surprising twists and turns. I love that there were several things that just didn't work out for the characters, or didn't go as well as they hoped. That's a touch of realism I can relate to. There were also a couple of particularly nice role reversals in the romantic thread that I enjoyed very much. All told, those unexpected moments and disappointments, the role reversals and the compromises characters were forced to make kept the plot fresh and pleasantly surprising.

Well-paced, solid of plot, with a few harsh realities that were real gems and populated with enjoyable characters, this first book in The Truth About the Duke series bodes well for subsequent books. I also have to say, meeting both the eldest and youngest of the de Lacey brothers through the course of the book hooked me on finding out more about the rake and the warrior, even if it's just to see them fall for their perfectly suited females when they meet them. I'm very much looking forward to continuing with this series.

Return to top of One Night in London