Less Than Perfect for Me 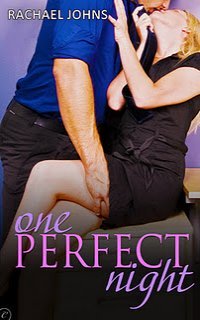 New company CEO Cameron McCormac has had little in the way of holiday spirit since his wife died a few years ago. As time goes on, he only gets more and more curmudgeonly while his family pushes harder and harder for him to jump back into a relationship. He had all the love he ever needed or wanted once, he was never going down that painful road again. Showing up at the company Christmas party, though, was required, so he planned to tough it out until the next leg of his torture commenced, the obligatory family get-together.

He was doing his due diligence, his gaze roving over the crowd of his employees and their families, when he caught a glimpse of an utterly captivating young woman dressed up like a fairy princess, leading some activity for the children of the company workers. With that one look Cameron's world...or at the very least, his hormones...tilted on its axis.

Peppa Grant knew that the new CEO of the company, a man who the female staff thought the was sexiest male they'd ever seen, was destined to have an unpleasant evening. She had no clue of how he was feeling about the holidays, but he was surely not going to be happy when she approached him and told him that she'd accidentally smashed into his car in the parking lot. She'd had to rush out for the costume when the hired talent cancelled, and then there was the cat that dashed out in front of her... She had accidentally put quite a bang into his Italian sports car.

It may be a Christmas miracle, but instead of taking the damage out of her hide or her paycheck, the gloriously handsome Cameron proposed an exchange. If she acts as his girlfriend in front of his family that evening, he'll forgive the crumple she'd given his Lamborghini. Uh...yeah...no big surprise which option she was going with on that one. What is a surprise is the sizzling chemistry between them. His intent to get her into his arms is heady, and their spectacular first kiss eventually leads to a perfect night in his bed.

Thing is, after Cameron gets his first taste of Peppa, he wants more. A physical relationship is well within his comfort zone, but he has no interest in love. Peppa, though, may be the one woman who drags him back to the land of the living...no matter how much he resents her for it.

I really wish I'd liked this book more than I had. I enjoyed the setting, Australia, and I liked the characters just fine. It was even written with a sleek, vibrant style that appealed. Problem is, I felt like I've read this exact plot at least a hundred times before, and there just wasn't anything unique about it to make it particularly memorable.

Rich, emotionally distant boss stumbles across vibrant and vivacious young woman who works for him and she brings color into his life as he, inevitably, falls for her without realizing it until the grand finale. It's been overdone. But honestly, if that had been the whole of it, I would have still thought it was an okay read. Nothing surprising, but pleasant and enjoyable. Johns has a smooth and easy-to-read writing style that I liked. There were some developments late in the book, though, that took a relatively harmless if predictable read and turned it into a book I ended up disliking.

Most of that dislike is based on a very subjective personal preference, but does contain spoilers.

I don't favor romances that use a surprise pregnancy as the fulcrum for relationship conflict. Beyond that, though, was the previously established unlikeliness of Peppa ever getting pregnant given her health issues. When combined with the use of protection during sex, the pregnancy plotline wasn't even plausible.

Still, I suppose I could have accepted that if the implausibility had been addressed as a part of the story after she got pregnant. Especially considering the plot threads surrounding her previous long-term boyfriend, who broke up with her because he wanted kids and she couldn't have them. Peppa never seemed stunned to be pregnant in the first place. She was, of course, surprised, but her health constraints didn't seem to be the reason why, just the use of protection. None of that really worked for me.

Without those issues, this would have been a pleasant enough read with a bit of spice in the bedroom and a sweet, simple romance outside of it. I'd give Johns another try, though, because she can definitely tell a story with fluidity and aplomb. I'd just hope for a more original one next time.

Return from One Perfect Night to Contemporary Romance Book Reviews

Return from One Perfect Night to OGBDA Book Reviews Home