My Wrong Move Was Not Picking Up This Series Sooner 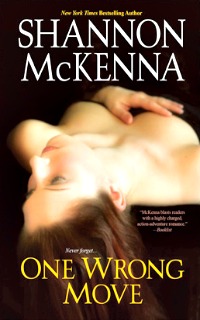 Disclosure:   An ARC of this book was provided to me by Kensington Publishing via NetGalley.

Nina Christie has had bad days before. Who hasn't? She never expected to have the concept quite so thoroughly redefined for her, however. Then she was accosted on the street in the predawn hours, a crazed, beaten, and bloody woman calling her name, stealing her phone, stabbing a needle into her arm...

As the world goes dark, confusion and horror clamor viciously inside her. Nina recognized the woman who injected her with whatever was in that needle. But recognition brought no release from dawning terror.

One would think waking up in a hospital, realizing you're still alive, would be a general improvement at that point, but there were a lot of hours left in this particular bad day of hers. With one injection of an unknown substance, Nina has been hijacked from her safe little world, become the hunted for a power-hungry, evil group of people who have deadly, manipulative skills and abilities no human should ever have. And they want Nina dead. Not for who she is, but for what's inside her.

Fighting hallucinations, suddenly hearing people's thoughts, escaping a kidnapping attempt, barely surviving more than one attempt on her life, Nina's reality as been brutally stripped down to one prevalent fact: without help, she's dead. But even when friend-of-a-friend Alex Aaro rescues her from a fate worse than death and agrees to guard her until other help arrives, Nina can't help but wonder.

Is Aaro a grim-faced, aggressive, antagonistic, all around less-than-pleasant knight in shining armor...or is he just another deadly element in a day overloaded with them?

I love to read, and of course I prefer to enjoy what I'm reading, so I can't begin to tell you how annoying it is to realize I've missed out on so many potentially awesome books. Based on how much I enjoyed this ninth (and it hurts me just to type that) installment of McKenna's McClouds & Friends series, I'm going to be kicking myself over this one for a long, long time.

This was such an adrenaline-laced, action-packed, hell of a good time! I absolutely loved main characters Nina and Aaro, the world was well-defined and richly detailed, and the plot was a breakneck race for survival that left me breathless. Some elements were a bit confusing, and the scenes that featured characters who had obviously been previously introduced in the series didn't have quite the emotional impact on me that they would probably have had on a reader familiar with the earlier books, but this still read just fine as a stand-alone.

Not that I'm going to let it stand alone. I have absolutely every intention of continuing on in this series now that I know it exists.

Nina and Aaro were the absolute stars in the story in every way. Not only did I find them both well-conceived and layered, with their own flaws and peccadilloes defining and deepening them as characters, they were also just a lot of fun to spend time with. I was worried at first that Nina would be a bit of a damsel in distress, but she's a real trouper. Witty, sarcastic, and tough when it counts, she comes through nicely. And the banter between her and Aaro was truly classic.

About Aaro...wow...loved him so much. Sexy in that bad boy, alpha male, my-feminine-side-is-a-9mm sort of way, he was all sarcastic aggression, bad temper, and Slavic gorgeousness. Totally yummy and in no way a nice guy, I loved his beleaguered honor and integrity and adored his antisocial attitude. And watching him be floored by his reaction to Nina...that was all kinds of good times. The bigger they are, the harder they fall. Yum!

Their chemistry was off-the-charts awesome, but I was so happy that McKenna kept their responses and evolving relationship as organic to their situation as it could be, all things considered. The timeline of the novel is rather brief, and I normally don't have a lot of tolerance for romances that spring up that quickly, but somehow, maybe because so very much is going on around them and happening to them in such a short time, the speed and depth of their feelings for each other didn't feel rushed or unrealistic.

The story itself was just as wild and wonderful as the relationship between Aaro and Nina. I have to admit, the beginning read a little slow to me because the book pulls no punches, dropping readers head-first into the established world. I was confused initially, and it did take me a little bit to wrap my head around some of the critical plot elements and the various factions involved. And frankly there was just a hell of a lot going on in the book with which I had to become familiar. I can't really blame McKenna for it taking me awhile to catch on.

The fact that I was eager to do so in the face of my initial confusion is a credit to McKenna, actually, because had Aaro and Nina not been such strong, compelling characters, I may have put the book down before I had time to get acclimated. I was hooked, though, the first time they spoke to each other over the phone, and on top of my delight over what a bad mood bear Aaro was, my interest in the story was cemented.

This is definitely a book I'd recommend to fans of romantic suspense with paranormal elements. It's a solid installment in a series I plan on continuing, and I'm sure I'll eventually stop kicking myself for missing out on so much of it. Now I know, and after enjoying Aaro and Nina's story I just couldn't be happier about that.

She looked around wildly. "But where? I don't see-"

"Oh," she said inanely. "Must be nice to have an early warning system. Are you sure it's not just a fungus?"

"So people shoot at you a lot, then?"

"Have you considered trying behavioral modification to address that problem?" she asked, a little too sweetly.

He shrugged. "It's more time effective to just shoot back."

He opened the freezer, which was amazingly functional. Some grubbing around yielded a handful of Lean Cuisines. He pulled out five, threw them into the microwave to nuke. "There," he said. "See? I cooked."

"Wow," Nina murmured. "The confidence, the skill, the flair. That was sexy, Aaro. I love to see a guy strut his stuff in the kitchen."

I don't usually like to comment on reviews because I'm always afraid someone will think I have an agenda, but I love this review - and the quotes!

Thanks, Julia! Let people think what they like. *I* know your only agenda in this case is your unimpeachable kindness. Many, many thanks, my dear.

Return from One Wrong Move to Romantic Suspense

Return from One Wrong Move to OGBDA Book Reviews Home