Couldn't Settle Into This One 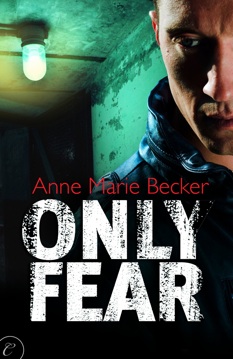 It happened a year ago. The broken mind of a mentally unstable patient brought tragedy and ravaged the life of Dr. Margaret Levine, altering it irrevocably. Since that dark day, Maggie has suffered from panic attacks, grief and guilt keeping her closed off from her family, fear keeping her shuttered away from the masses. She no longer sees patients face to face, she dispenses psychiatric advice and guidance over the airwaves on her nightly radio call-in show, Live with Levine.

Owen is a regular caller.

Maggie thought Owen was good for ratings. He was respectfully contentious, offering controversial counterpoint arguments and boosting call volume. Until the night Maggie's show touched on the subject of fear, she never had any doubts that Owen was harmless, if a little intense.

Having already been nearly broken by one patient who became unhinged, Maggie wasted no time calling for help that night. It was obvious Owen had broken into her house, desecrated her walls, invaded her sanctuary. She called an old friend. The father of a very old friend. A man, like Maggie herself, whose life was altered forever by the most grievous of tragedies. That man heads an elite team of specialists who are uniquely qualified to hunt and catch those like Owen. Those with aberrant minds.

He sends former Secret Service Agent and current security specialist Ethan Townsend to Maggie to spearhead her protection detail. Ethan, marred with his own scars and regrets and plagued by self-doubt, knows this job is a chance to redeem himself. He expected the lauded Dr. Margaret Levine to be a contemporary of his beyond-middle-aged boss. He's knocked sideways by the delicately fiery Maggie, a vibrant young woman who scrubs her own walls and jams out to hard rock as she wails on her air guitar.

What starts as a job to protect a noted popular psychiatrist becomes a passion to protect the woman. And that is not Ethan's only passion when it comes to Maggie.

The danger to the delectable Dr. Levine may be much greater than originally thought, however, when evidence connects Owen to the vicious murders of a serial killer known as Fearmonger. And if it is, in fact, Fearmonger stalking the good doctor, then it will take every bit of skill and every ounce of caution to bring him down.

One thing is certain, fear won't kill you...but if Ethan and Maggie lower their guard, Fearmonger will.

I thought this book was right up my alley. It's my favorite type of romantic suspense, a gripping psychological thriller mixed with steamy romance. A madman is on the loose doing unspeakable things, terror abounds, and there's a pulse-pounding race to save the day and the lives of the characters. My kind of stuff. So imagine my disappointment when story elements started to go awry for me very early in and the plot kept faltering from there.

It wasn't the quality of the writing. Becker is quite good at creating tense scenes, cranking up the drama, flowing the blood, creeping out readers. The main and secondary characters were fleshed out nicely and provided sufficient backstory to round them out and add an air of realism to their lives. On their own merits, they were sympathetic, together, they had good chemistry.

My problems with the book weren't those factors at all, but the towering pile of ills and imps, the illogical and implausible plot elements that so often trip me up and rob me of my ability to stay connected to a story. And there were some fairly egregious ills and imps in this book.

Without including spoilerish details, I will keep this as general as possible, but I found Maggie's initial on-air response following the break-in both unprofessional and unwise, and the fact the station allowed the feed to continue to air was perplexing. Also perplexing was the lack of call tracing attempts. The police involvement throughout the book seemed bizarrely negligible. The idea that the cops would so easily coordinate with and include a private organization like SSAM flies in the face of every other bit of fiction I've ever read, watched, or otherwise experienced. And the parts of the narrative that were from the villain's point of view were counterproductive to maintaining his fear level and respect for his power.

Then there was The Moment. I'm so tired of The Moment in suspense fiction, and it's distressingly prevalent.

The Moment is what I call that one point of a book where one or more of the main characters act in either such a grossly stupid, against established character, or counter-intuitive manner that it smacks me in the face with its incomprehensibility and practically screams, "Final conflict and book climax ahead!" It often leaves me feeling shamelessly manipulated with the taste of disappointment from the plot contrivance heavy on my tongue.

Note: The following paragraph has been hidden because it contains spoilers that detail The Moment. If you want to read it, simply click on the button below.

There's just no way I could believe that a former Secret Service Agent who guarded the family of the Vice President of the United States of America, one who is still blaming himself for the death of a young girl while on the job, would take the woman he loves, the woman he has sworn to both protect and not let out of his sight, the woman who he knows is being targeted by a serial killer, into a bar he's never been into before, across the street from a place they were investigating as the potential workplace of a vicious killer, without a) taking note of the number and location of the exits or b) keeping them in sight. Then, not minutes after telling this woman she wasn't to leave his side, he c) allows her to go by herself to a bathroom with d) an entrance he does not have in his direct line of sight. He then e) proceeds to give her more time alone than he told her she would have, finally f) sends someone else to check on her, but still g) sits on his ass for long minutes though neither person returns. I'm sorry, but no. I mean...that's half an alphabet of ills and imps right there!

Becker's writing is strong enough, and the romance worked well enough for me that I'd happily try to cling to my willing suspension of disbelief for another shot at a book in this series. Like I said, this type of book is my favorite cuppa in the romantic suspense genre, and despite not completely buying the level of coordination between the cops and SSAM, I like the organization and its members enough to read more about them. Yeah, I'd like the story elements to be a bit more believable, but even this book, without The Moment, would have been at least an okay read for me. I'll hope for a few less ills and imps in the future, but I'd definitely give the next book a try.

Return to top of Only Fear