Tries Hard But Doesn't Quite Make It 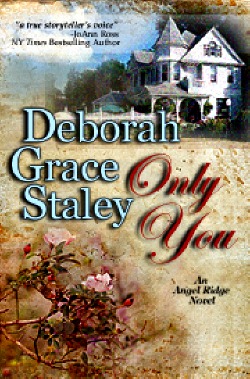 They were nothing more than casual acquaintances when they were in school together as children, but there's always been something about Josie Allen, now Dr. Josie Allen, that Cole Craig hasn't been able to forget, despite her years away obtaining that high dollar doctoral education. Now she's back in Angel Ridge putting that education to work in running the prestigious local library, and Cole can't help but notice (and appreciate) that neither one of them are children any longer.

Josie is struggling with the state of the art library program she created and she's starting to panic. With a Memorial Day deadline looming and computers that crash whenever they're touched, she can't seem to make the upgrade work and it's making her crazy. As if that weren't bad enough, she's stuck with her family house and feeling suffocated by the pressure of and obligations to the rich and influential McKay matriarch, who financed Josie's post graduate education in exchange of her taking over the job at the library when she graduated. As a result, Josie's starting to feel like an indentured servant to the snobby old biddy. She doesn't have time to breathe, let alone spend time with Cole...no matter how fantastic a man he seems to have grown into. Not that Cole is going to let her work herself to death when he can do something to stop it.

He's a high school dropout from the wrong side of the tracks who works around town as a handyman. She's the daughter of one of the socialite families, highly educated and successful. It's a recipe for disaster, but Cole likes to stir things up and this woman's worth the storm.

Only You could have been a sweet southern romance but it stumbles out of the gate with a weak, underdeveloped plot and two dimensional lead characters who never quite felt real to me. The problems were compounded by cliched plot devices and secondary characters that are closer to caricature than to small town southern charm.

On the surface, Only You is an uncomplicated, too-cute romance about a guy who has loved a girl all his life and is just now able to catch her eye...and I would have preferred the book had it stopped there and simply focused on the issues between the characters as they grow together into a relationship. True, it may not have been the most complex story, but there's a lot to be said for simple in romances. Instead, external issues are brought in but never developed enough to be anything more than a distraction, nor did they show off the lead characters in much of a complimentary light.

I liked Cole well enough at first, but his flowery, overly expressive emotional responses to Josie when they started to click felt contrived and unrealistic. He was, though, my favorite of the two characters, because I found Josie to be hopelessly prosaic and immature for a woman who was supposed to be a highly educated, intelligent contemporary woman. Perhaps if this book was set up as a fifties era romance, her diffidence and the provincial reactions to the difference in the social status between she and Cole would have felt more organic, and her reactions to the town's interest and to Mrs. McKay's interference would have seemed less tragic.

And for a romance featuring a small southern town and its townspeople as a backdrop, there were way too many missed opportunities to establish a quirky individuality and capture the unique flavor of such wonderful slices of Americana.

There were a few glimmers of promise in Josie's elderly neighbor and Cole's friend Dixie, but they just weren't tied in to the central plot enough to be more than peripheral pleasures. I enjoyed them, though. And Cole wasn't so bad that I disliked him, either. Only You left too much room for improvement overall, though, and that was a shame.

Return from Only You to Contemporary Romance Genre

Return from Only You to OGBDA Book Reviews Home