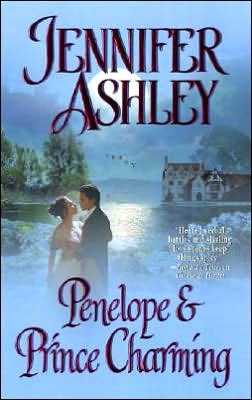 Practical Penelope Trask was resolved to spinsterhood after jilting two fiances whose habits and desires she found...objectionable. She's quite happy with accepting that lot in life, until Prince Damien of Nvengaria shows up in her quiet little hamlet and claims she's the prophesied princess of his country and destined to be his wife. Prince Damien doesn't particularly believe in prophecies, but he needs to take control of his country after his evil father had run it into the ground and exiled him. Now that his father is dead, his country is being run by Grand Duke Alexander, who keeps sending assassins after him. Knowing his passionate people and understanding their love of magic, he's determined to woo Penelope and bring her back to his people in time for Midsummer - or risk being executed after seeing his people turn against him.

When he meets her, sees her, touches her for the very first time, however, the power of the prophecy is realized and his desire for her is unimaginable. As is hers for him. But there are requirements to fulfill the prophecy first, and Regency England has its own requirements for appropriate behavior. Then there's the assassination attempts and the ticking clock and a myriad of other things pressing down on Penelope and Damien, threatening to keep them apart. Who knew fairy tale romances could be so darn complicated?

Jennifer Ashley had some nifty ideas for Penelope & Prince Charming, but for me, there were more misses than hits. The story premise was okay, with a bit of originality in the prophecy and fairy tale feeling of the piece, but the pacing of the story was inconsistent, most notably with a slow and laborious beginning and a conclusion that felt rushed and perfunctory. The lead characters were more like caricatures, exaggerated personalities in exaggerated situations, and I found neither Penelope nor Damien all that likable for the first half of the book. Sometime after that, both the story and the characters smoothed out a bit, Damien and his group of Nvengarians becoming far more realistic and fully realized, and more depth or personality was given to Damien and Penelope both. The difference, though, from one part of the book to the next, was peculiar, even though it improved my appreciation of them as characters.

That being said, there were also several things that I liked very much about the book. The antagonist Alexander was a complex "villain," with his only motivation being his concern for his country and his unyielding belief in his own ability to govern it. He was flawed, but he wasn't some evil bad guy with nefarious world domination on his mind, and while his actions were questionable, I could respect his motivations. I liked how he was with his wife and loved his affection for his son. He was the most pleasantly surprising aspect of the book as a whole. I also grew quite fond of several of the secondary and ancillary characters, and I liked Damien's steadfast devotion to Penelope after his roguish past, even after the prophecy plot line reached its conclusion.

The prophecy itself seemed little more than a handy excuse to shovel a lot of sexual situations into the plot, and those situations did nothing to add to the story or characters, nor did it add any believability. It was, too, a part of the overall inconsistency of the book, as the relationship between Damien and Penelope had a more serious bent with some legitimate depth and complexity towards the end that was absent in the beginning. The sexuality in the book was a bit more unconventional than I'm used to in this genre of romance (in places, not in every sex scene) and while I think there was an effort made to provide plausibility, it just didn't quite work for me. And wow...suddenly I sound like a prude. That's a little personally distressing, actually, so moving on...

I'm glad this wasn't the first Jennifer Ashley book I've read, as I don't know that it would have motivated me to try others titles. Instead, I have read several other Ashley books and liked them very much. This just wasn't one of my favorites. I still admire her as an author and look forward to more of her work.